Leofric Poised for Breakthrough in Friday's Grade I, $500,000 Clark Handicap

Steve Landers Racing’s Fayette Stakes (Grade II) winner Leofric has not finished worse than fourth throughout his 13-race career but the flashy gray son of Candy Ride (ARG) is hoping to breakthrough for his first Grade I victory in Friday’s $500,000 Clark Handicap Presented by Norton Healthcare (GI) – the premier race of the Fall Meet at Churchill Downs.

“He’s just been so consistent throughout his career,” trainer Brad Cox said. “He’s gotten better with age. He tries hard every time and gives you everything he’s got. He’s the type of horse that can be tactically placed wherever you need him in the race.”

Leofric (13-7-1-3—$650,340) rallied from just off of Prime Attraction in the Fayette to prevail by a head. The 5-year-old led wire-to-wire in the West Virginia Governor’s Cup (GIII) in early August at Mountaineer before his third-place finish in the Woodword Stakes (GI) – his first attempt at a Grade I victory.

Leofric was made the 3-1 co-second choice on Mike Battaglia’s morning line odds for the Clark Handicap along with Fayette third Prime Attraction. Seeking the Soul, the defending Clark champion, was slated at 8-5 on the morning line.

The 1 1/8-mile Clark heads a duo of stakes races on the 12-race “Black Friday” card on the day after Thanksgiving that is traditionally the most popular racing day of Churchill Downs’ Fall Meet. The main event is scheduled as the 11th race on the Friday program at 5:56 p.m. (all times Eastern) that also features the 28th running of the $200,000 Mrs. Revere (GII) for 3-year-old fillies on turf. Post time for Friday’s first race is 1 p.m.

One race prior to the Clark, Pebbles Stakes winner Stella di Camelot (IRE) was made the 2-1 morning line favorite for the 28th running of the $200,000 Mrs. Revere (GII). Stella di Camelot previously ran in France with Gianluca Bietolini prior to her being transferred to trainer Chad Brown’s care in the spring.

CHEF DANIELSON AND TEAM READY FOR THANKSGIVING TRADITION AT CHURCHILL DOWNS – With more than 3,000 pounds of turkey ready to be carved, alongside all of the fixings, Thanksgiving Day at Churchill Downs has been a Louisville, Ky. tradition for nearly a half-century.

“It’s probably our busiest day of the year outside of Derby Week and the Breeders’ Cup,” said Levy Restaurants’ David Danielson, the Executive Chef at Churchill Downs. “We start preparing the meal months in advance to ensure we have enough food to serve everyone attending. Since we have to order so much food, especially turkeys, we have to start planning our shipments months ahead of time.”

FIRST DERBY FUTURE WAGER OF YEAR OPENS THURSDAY; BAFFERT HAS SEVEN PROSPECTS – Seven horses conditioned by Hall of Fame trainer and five-time Kentucky Derby winner Bob Baffert, are among the 24 betting interests in Pool 1 of the 2019 Kentucky Derby Future Wager, which kicks off a four-day run at Churchill Downs on Thanksgiving Day.

Unbeaten Sentient Jet Breeders’ Cup Juvenile (Grade I) winner Game Winner heads the Baffert arsenal and is the 8-1 individual favorite on veteran odds maker Mike Battaglia’s morning line. The pari-mutuel field of “All Other 3-Year-Old Colts and Geldings” is expected to be the overall first-pool favorite for the 21st consecutive year and Battaglia projects it to close as the 7-5 choice.

New to Pool 1 this year is an option for bettors to wager on “All 3-Year-Old Fillies,” which is projected by Battaglia to close at odds of 30-1.

THANKSGIVING WEEK STAKES – The fields for Churchill Downs stakes races on Thanksgiving weekend have been drawn:

DOWN THE STRETCH – There was a $181,423 carryover in the 20-cent Single 6 Jackpot to begin Wednesday’s card. The Single 6 sequence began in Race 5 at 3:03 p.m. (all times Eastern). … Trainer Dale Romans began Wednesday five wins away from 2,000 career victories and had eight entries Wednesday-Friday. 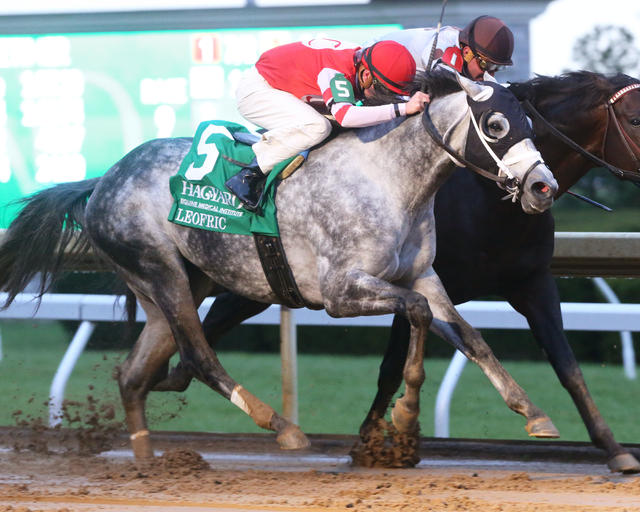