Don Alberto Stable’s Limari will attempt to land her fifth consecutive victory Saturday when she tests stakes company for the first time in the $125,000 Old Forester Mint Julep (Grade III) for fillies and mares at 1 1/16 miles on Churchill Downs’ Matt Winn Turf Course.

Limari, a 4-year-old filly by Medaglia d’Oro, was transferred to trainer Brad Cox’s stable last year from previous conditioner Jerry Hollendorfer. Since arriving in Cox’s care, Limari has reeled off four straight victories and a runner-up effort, including a 2 ¾-length score in her last start at Keeneland on April 19. The homebred will once again be united with jockey Florent Geroux and break from post position No. 7 in the field of 10.

Among Limari’s chief rivals in the Old Forester Mint Julep is Carl Moore Management and Brad Grady’s three-time stakes winner Mom’s On Strike (19-6-6-1—$519,375), who returns to the races following a seven-month layoff for trainer Joe Sharp. The daughter of First Dude won the 2018 Marie G. Kranz Memorial Stakes and Albert M. Stall Memorial Stakes at Fair Grounds prior to her score in the Bewitch Stakes (GIII) at Keeneland. Unraced since an eighth-place finish in last November’s $2 million Breeders’ Cup Filly & Mare Turf (GI), Mom’s On Strike will again be ridden by Adam Beschizza from post 3.

Also entered in the Old Forester Mint Julep is Robert and Lawana Low’s recent four-length allowance winner Smart Emma (17-4-0-2—$185,122). Trained by Danny Peitz, Smart Emma returned to the turf in the aforementioned May 16 allowance race following two unsuccessful efforts over the dirt this winter at Oaklawn. The 6-year-old daughter of Smart Strike will be ridden by Declan Cannon from post 2.

The Old Forester Mint Julep has been carded as Race 10 on Saturday’s 11-race program with a post time of 5:26 p.m. (all times Eastern). Churchill Downs’ traditional early June stakes event serves as a prelude to a simulcast of horse racing’s third and final jewel of the Triple Crown, the $1.5 million Belmont Stakes (GI) from New York’s Belmont Park, which will be shown on “The Big Board” – Churchill Downs’ massive outdoor video screen – and other television monitors throughout the facility after the final race at approximately 6:46 p.m. Post time for Saturday’s first race at Churchill Downs is 12:45 p.m. and admission gates will open at 11:15 a.m.

The Twilight Thursday Presented by Blue Moon abbreviated eight-race program starts at 5 p.m. and is highlighted by $1 Blue Moon and select domestic beer drafts, food trucks, live funk and soul music on the Plaza stage by Soul Circus, lawn games and one-on-one handicapping advice from Racing 1.0. There also is a $30,613 carryover in the 20-cent Single 6 Jackpot in Races 3-8 and a $4,505 carryover in the $1 Super Hi-5 in Race 8.

Friday is dubbed as “Senior Day” at Churchill Downs and guests 60 and older can enjoy lunch on Millionaires’ Row for only $24. To purchase tickets, contact the Churchill Downs sales department at (502) 636-4450 or email [email protected]. First post for Friday’s nine-race card is 12:45 p.m.

Advance wagering on Saturday’s 151st Belmont Stakes (Grade I) from Belmont Park will be offered all day Friday at Churchill Downs. Admission gates open Friday at 11:15 a.m. and the first of nine races is 12:45 p.m. General admission is $5 and includes a program.

Similar to Churchill Downs’ popular Oaks/Derby Double, the New York Racing Association (NYRA) will offer a pair of two-day doubles: the New York/Manhattan Double, which has a $100,000 guaranteed pool, and the $300,000-guaranteed Belmont Gold Cup/Belmont Stakes Double. There also is a $500,000 guaranteed Late Pick 4 from Belmont on Races 8-11.

Fans are invited to watch the 151st running of the $1.5 million Belmont Stakes (GI) Saturday on Churchill Downs’ massive Big Board. The 13-race program at Belmont is a stakes bonanza with 10 overall, including six Grade I events. The action begins at 11:35 a.m. so Churchill Downs will open its admission gates early at 11:15 a.m.

The pomp of the Belmont Park action will be featured prominently at Churchill Downs on Saturday with the simulcast of the 1 ½-mile Belmont Stakes scheduled for 6:37 p.m., which follows the final live race at 5:58 p.m. Video and audio of a majority of the stakes races from Belmont will be shown between races on the track’s massive Big Board when they don’t conflict with live action.

Guests at Churchill Downs will have an opportunity to enjoy New York-themed food offerings in select dining rooms and concession stands, including chicken parmesan sliders. Also, Levy Restaurants will sell the Belmont Jewel – the official drink of the Belmont Stakes (includes Woodford Reserve, lemonade, pomegranate juice and orange zest). Last call for drinks on Saturday will be “Call to the Post” for the Belmont Stakes, and all dining rooms will remain open through the big race.

The hosts of “Inside Churchill Downs” – Churchill Downs Racetrack’s Darren Rogers and Kevin Kerstein – will preview Saturday’s Churchill Downs and Belmont Park racing action with special guests on their 6-7 p.m. show that airs every Friday on ESPN 680/105.7. Those outside the Louisville area can listen live online at http://www.espnlouisville.com/ or download a podcast of the show after its completion.

General Admission to Churchill Downs on Saturday is $7, reserved seating is $12 and reserved dining packages are $51. General admission for the racing cards on Thursday (5 p.m. first post), Friday (12:45 p.m.) and Sunday (12:45 p.m.) is $5, with reserved seating at $12 and dining at $41. Churchill Downs has a special Stakes & Eggs brunch in the Stakes Room on Sunday for $45. Tickets can be purchased in advance online at ChurchillDowns.com/Tickets. 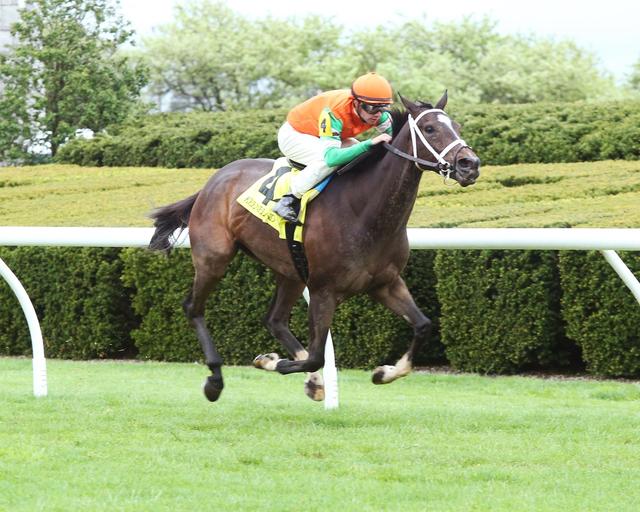