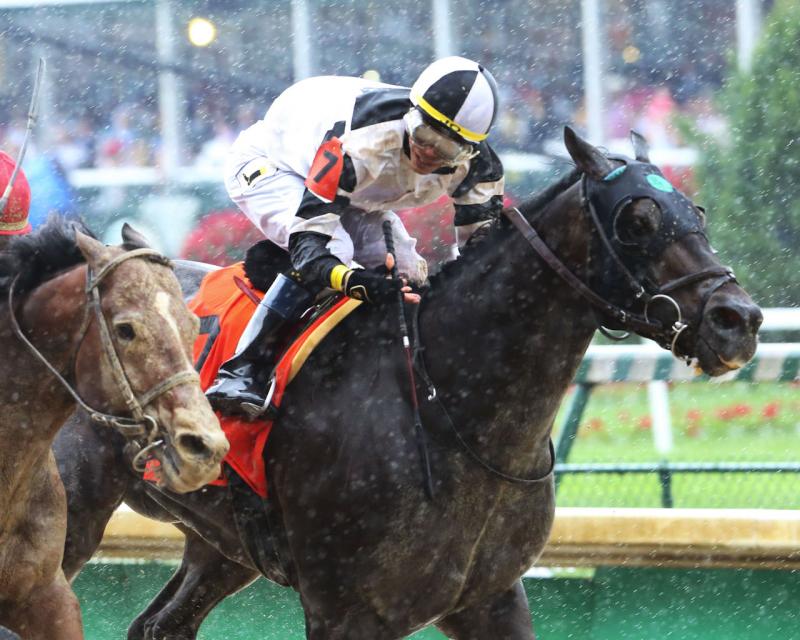 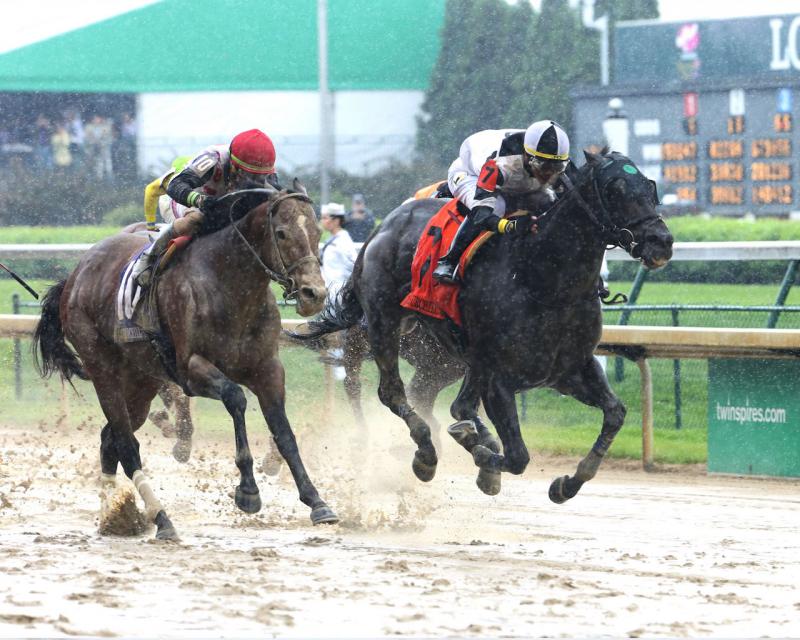 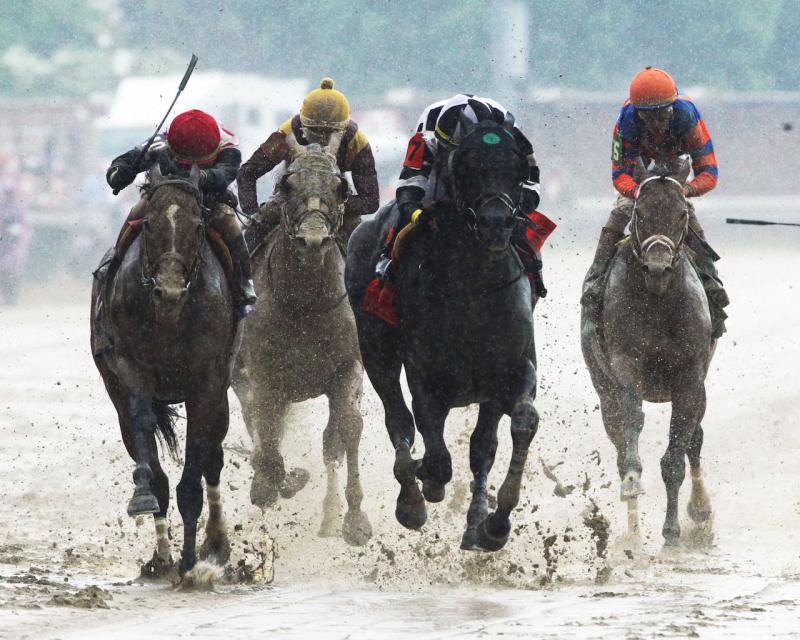 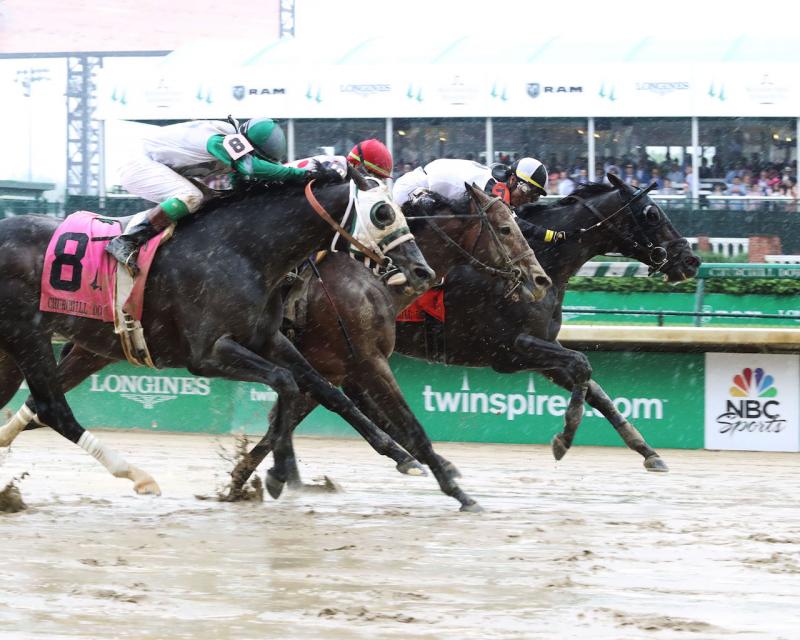 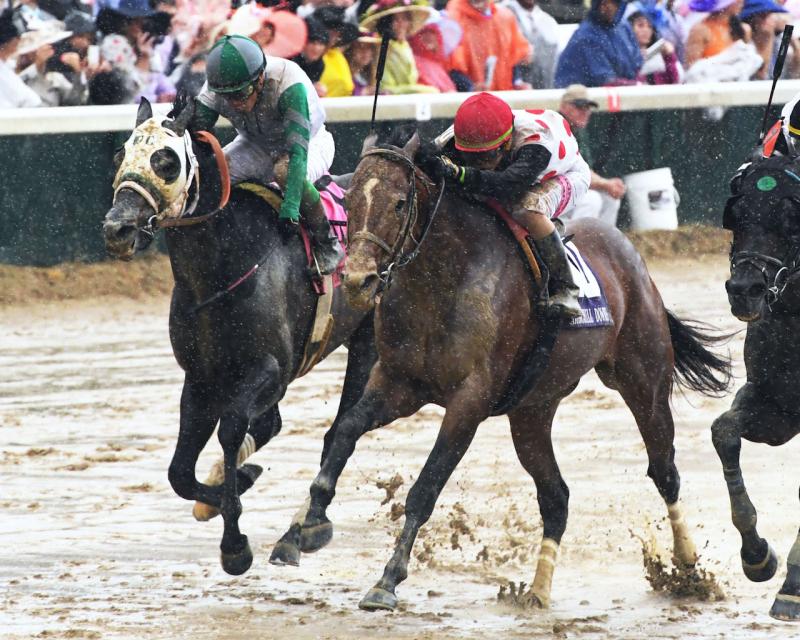 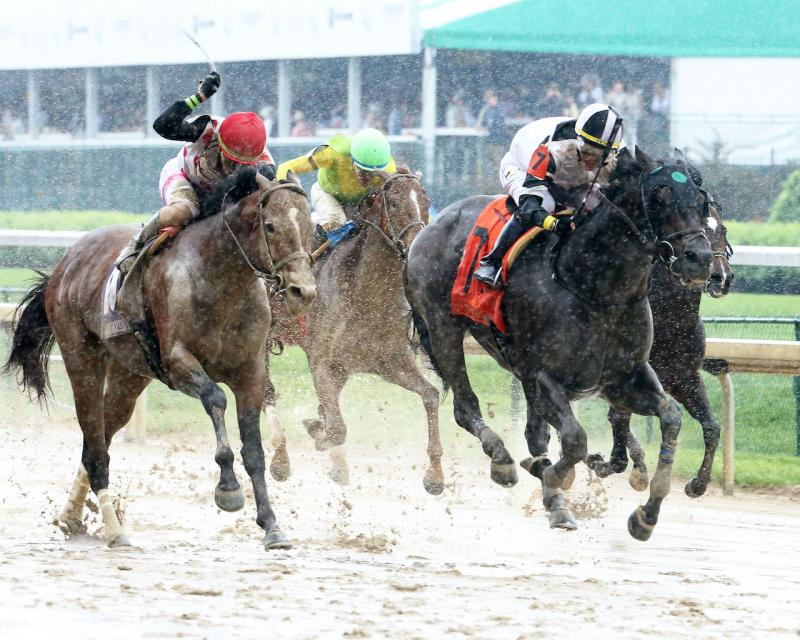 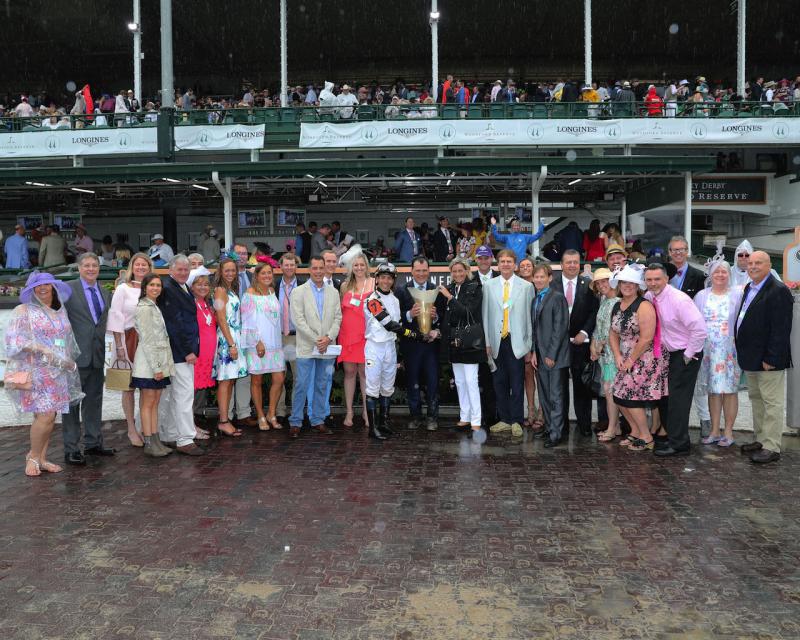 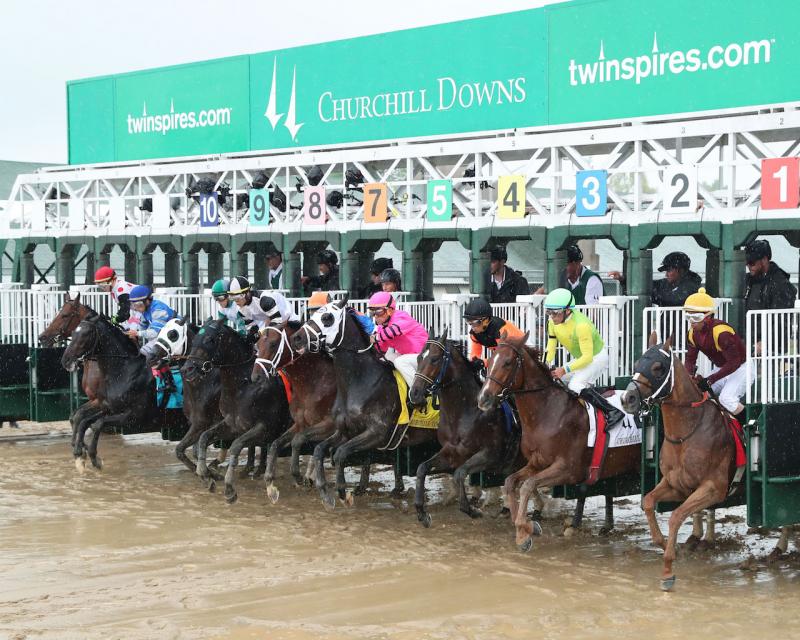 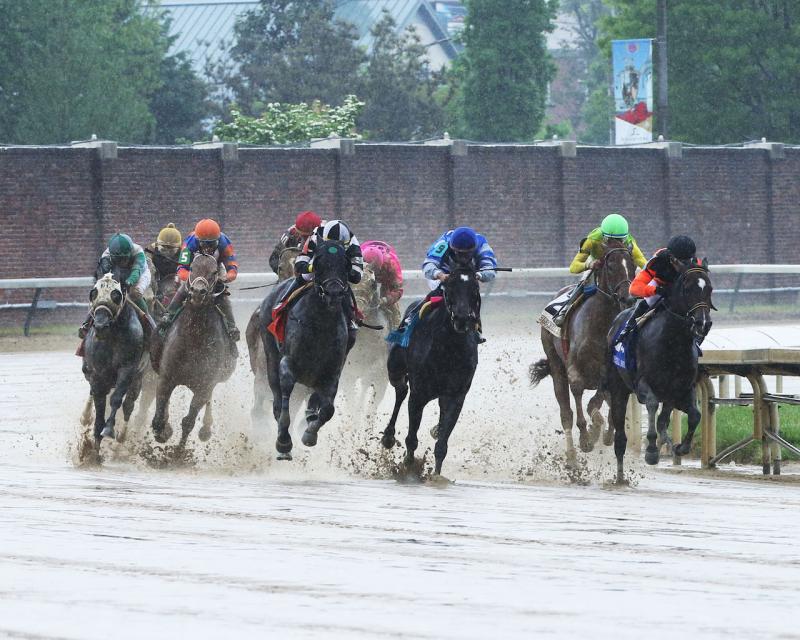 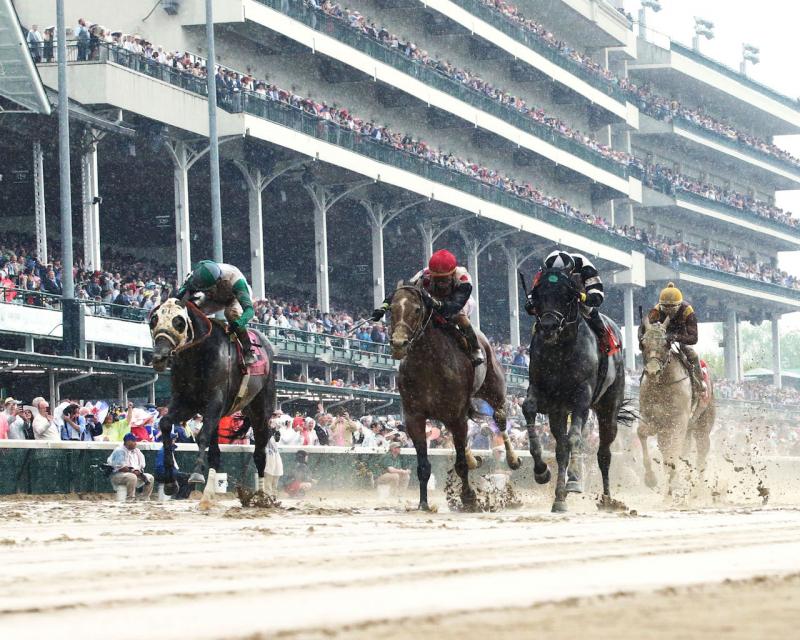 LOUISVILLE, Ky. (Saturday, May 5, 2018) – Katherine Ball’s homebred Limousine Liberal surged to the front in deep stretch to successfully defend his title by a head over Warrior’s Club in winning the 84th running of the $500,000 Churchill Downs Presented by TwinSpires.com (Grade I) for 4-year-olds and up.

Trained by Ben Colebrook and ridden by Jose Ortiz, Limousine Liberal covered the seven furlongs on a sealed and sloppy main track in 1:22.73. The same pairing was in the winner’s circle for this race last year.

Limousine Liberal became the fifth horse to win the Churchill Downs in consecutive years and the first since Sovereign’s Ace in 1986-87.

Favored Imperial Hint led the field of nine through fractions of :22.10 and :44.57 but as the field left the far turn for the stretch, Limousine Liberal and Awesome Slew mounted their challenges.

At mid-stretch, Awesome Slew held a brief advantage only to have Limousine Liberal surge back and then have enough left to hold off a fast-closing Warrior’s Club.

It was another three lengths back to Whitmore, who was followed in order by Chief Cicatriz, Imperial Hint, Outplay, Unbridled Outlaw and Conquest Windycity.

Jose Ortiz (rider of Limousine Liberal, winner) – “He broke good and I got into a good position. I just sat and at the three-eighths, I got him out. It took a lot of guts to win this race. They made him run. I hit him left handed and he kept fighting with that other horse (Warrior’s Club). By the 16th pole, I knew we had it. He’s very game. (Trainer) Ben’s (Colebrook) has done a great job with him. I’m very happy. We’ve won this race back to back.”

Ben Colebrook (trainer of Limousine Liberal, winner) – “Ecstatic, it’s awesome. Ideal conditions for him maybe, he loves the wet racetrack and he’s a fighter. He just wasn’t going to get beat today. He was a little closer (to the pace) I think than we probably had planned, but they didn’t go as fast as it kind of looked like. The first quarter was in :22, and I didn’t see the half, but I would have thought it would have been :21. And he was a little closer and I think that made the difference. He was able to kind of sneak away there a little bit and then he fought back after they passed him, and just a phenomenal ride by Jose and blessed, really to have a horse like this.

“The Aristides (GIII) and the True North (GII) would be the logical (targets for his next race). We’re going to try to work backwards from the Breeders’ Cup here. Obviously he’s got home court advantage, so they’re going to have to run to beat him. We’ll just enjoy this, and nothing committed for right now.”

Luis Contreras (rider of Warrior’s Club, runner-up) – “I wasn’t sure (who won), because he (Limousine Liberal) was way inside of me. I thought I was going to get a chance to win at the end. My horse gave me everything in the stretch. It’s too bad we didn’t make it in the end. We stayed outside out of trouble. I got a really great trip.”

Irad Ortiz Jr. (rider of Awesome Slew, third-place finisher) – “This is the first time I rode him and I wasn’t sure what was happening. He made the lead so easy, but once he did, he seemed to lose interest. If I ride him again, I’d take a hold and save something for late.” 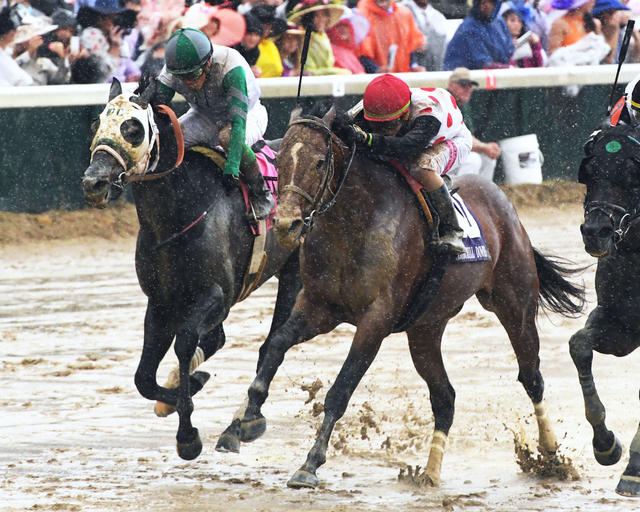