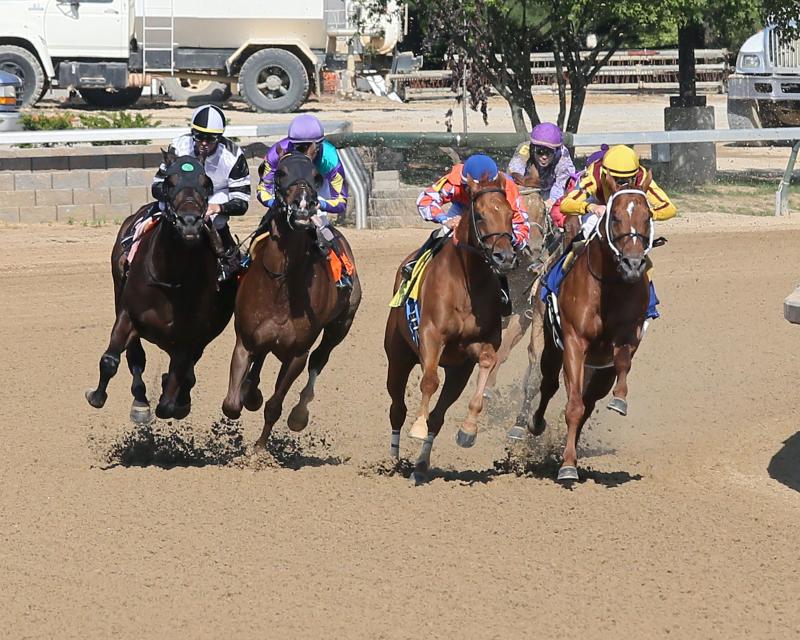 Limousine Liberal (at left in black and white silks) rallied wile and pulled away in the stretch to win the 29th running running of the $100,000 Aristides (GIII) for owner Katherine Ball and trainer Ben Colebrook. (Coady Photography, Churchill Downs) 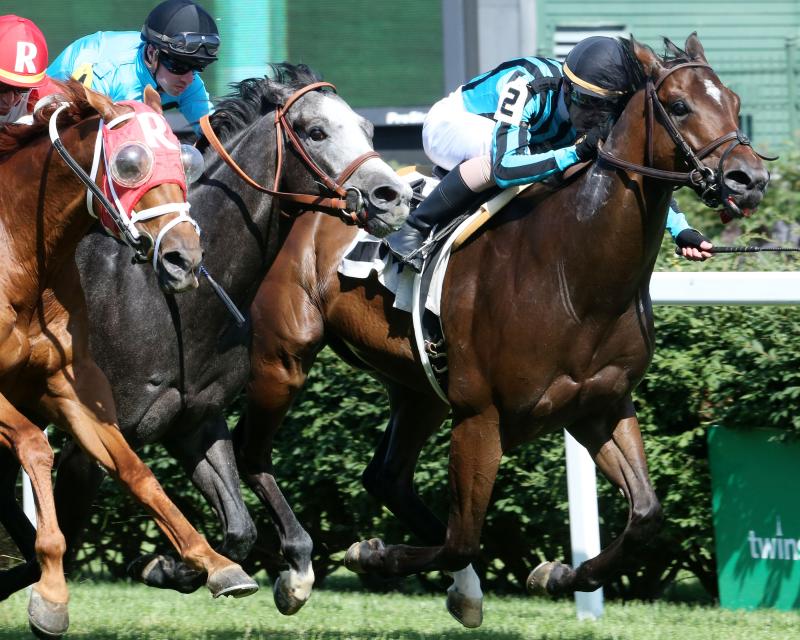 Katherine Ball’s 5-year-old homebred Limousine Liberal collected his second straight stakes win at Churchill Downs when he drew clear late to win Saturday’s 29th running of the $100,000 Aristides (Grade III) by 2 ½ lengths over Wilbo and a late-closing The Truth or Else.

Trained by Ben Colebrook, Limousine Liberal clocked six furlongs over a fast in 1:09.12 to give white-hot leading rider Corey Lanerie his fifth win of the day.

Sent off as the odds-on 3-5 favorite in the field of six older horses, Limousine Liberal was rated in fourth and in the clear from the outside just off pacesetter Union Jackson, who ran the first quarter mile in :21.83 and the half in :45.17. Wilbo put his nose in front of Union Jackson at the top of the stretch, but Limousine Liberal was a looming presence while racing three-wide. He drew even at the eighth pole and spurted clear inside the final sixteenth of a mile for the comfortable win.

Prior to the Aristides, Limousine Liberal scored a breakout win in the $500,000 Churchill Downs Stakes Presented by TwinSpires.com (GII) on the May 6 Kentucky Derby undercard.

Limousine Liberal, who avenged head defeat in last year’s Aristides by the now-retired millionaire Alsvid, is only the second horse to sweep Churchill Downs’ pair of premier Spring Meet sprint stakes for older horses. D.B. Davidson’s Beau Genius, ridden by Ricardo Lopez and trained by Gerald Bennett, won both the Churchill Downs and Aristides in 1990.

“Ben has done a great job getting him ready,” Lanerie said. “I think he relaxed more today and had a better kick in the stretch.”

Union Jackson faded to fourth and was followed by Schivarelli and Abbaa. Recount and Wabel were scratched.

For Limousine Liberal, it was his fifth victory in 15 starts and his earnings now stand at $832,500. He is a son of Successful Appeal out of the In Excess (IRE) mare Gift of Gab and was bred in Kentucky by Mike and Katherine Ball.

“We’ll look at the (July 8) Belmont Sprint Championship (GII) and races at Saratoga next,” Colebrook said.

Coming into the year, Limousine Liberal had typically run fast against top competition but often came up short. At age 3, Limousine Liberal was second to eventual 2015 champion sprinter Runhappy in the $500,000 King’s Bishop (GI) at Saratoga and then was beaten a neck in the $300,000 Gallant Bob (GIII) at Parx. Last year, the Kentucky-bred was second in a trio of graded stakes: the Aristides (GIII), $250,000 Smile Sprint (GII) at Gulfstream Park and $250,000 Phoenix (GIII) at Keeneland. He also has competed in the last two renewal of the Breeders’ Cup Sprint (GI), finishing 11th at Keeneland in 2015 and fourth at Santa Anita last year.

Earlier on the 11-race program, Patricia’s Hope LLC’s 4-year-old gelding Forgive broke alertly from the starting gate and held off fast-closing Partly Mocha and stablemate Platinum Prince to win the second running of the $55,040 Mighty Beau Overnight Stakes by a head. Trained by Mike Tomlinson, Forgive ran five furlongs over firm turf in :56.31 under Joe Rocco Jr. to collect his third straight win and fourth overall from eight starts. The New York-bred son of Sidney’s Candy paid $18.60 to win as the sixth betting choice in the field of eight 3-year-olds and up, and banked $32,476 to push his career earnings to $125,156. This was Forgive’s first stakes win. The speedy Latent Revenge, sent to post as the 2-1 favorite after winning the race a year ago, bobbled at the start and finished last.

Racing at Churchill Downs resumes Sunday with a nine-race program that begins at 12:45 p.m. (all times Eastern). There is a $36,073 carryover in the Single-6 Jackpot, which covers Races 4-9. Sunday doubles as Family Adventure Day Presented by Kroger. The day of racing is complimented by plenty of family activities in the Plaza area including pony rides, inflatables, a petting zoo, stick horse races, face painting and more. There also will be a special “meet and greet” with popular “Trolls,” Poppy and Branch. Admission gates open at 11:30 a.m.

COREY LANERIE, jockey of LIMOUSINE LIBERAL (winner): “Last year in the Aristides we came up just a bit short. It was nice to rebound this year. Ben (Colebrook) has done a great job getting him ready. I think he relaxed more today and had a better kick in the stretch.”

BEN COLEBROOK, trainer of LIMOUSINE LIBERAL (winner): “It was an easy decision to stay home and run again in the Aristides. He ran a tough race on Derby day and the race in New York (Grade II True North Handicap) was coming up tough. Corey (Lanerie) gave a great ride this afternoon. We’ll look at the (July 8) Belmont Sprint Championship (GII) and races at Saratoga next.”

CHRIS HARTMAN, trainer of WILBO (runner-up) – “I thought he run his eyeballs out – he run a hell of a race. I’m super-stoked about the way he ran.He just got outrun by a better horse.”

Q: Did you have some high hopes at the head of the stretch? “Let me tell you something, me and (owner) Chris Wilkins just said at the top of the lane said, “Maybe we’ve got this guy.” But he dashed him.He had to ride him to get past us and then, once he got by, he went ahead and stretched us out. We gave him a solid run, anyways, but at the top of the lane I thought we might have him. But (Ben) Colebrook had a better horse and that’s the way it is with horse racing. But it was fun and there’s nothing wrong with that. He ran a hell of race and ran as good as he could. He just ran second.

“This horse ran big. I’m super happy with the way he ran and he got beat by a horse that just won a big-money race. I’m a fan of that horse (Limousine Liberal), too. I’d like to take him down, but you don’t always get everything. But our horse ran good, and that’s all you can expect.”

ALBIN JIMENEZ, jockey on WILBO (runner-up) - “He ran well. I expected him to run from behind, but he broke good and I put him right there. The winner was just very strong. He ran good.”

CHANNING HILL, jockey on THE TRUTH OR ELSE (third) – “I’ll tell you what – at the top of the lane, I really did think he was going to win. Then they just didn’t come back. They’re obviously good horses and they don’t. I give a lot of credit to the winner (Limousine Liberal). He ran a fantastic race being six-wide the whole way. He just never really had great position, but he just drew away. I mean, when Corey (Lanerie) actually asked him from the eighth pole he just stepped away from us – and we were running, too. I give him a lot of credit.”

JOE ROCCO JR., jockey of FORGIVE (winner): “When Latent Revenge didn’t break well, that changed the whole landscape of the race. Forgive is a very game horse. Mike (Tomlinson) told me in the paddock how well this horse has been training in the morning and he really showed it this afternoon.”

MIKE TOMLINSON, trainer of FORGIVE (winner) and PLATINUM PRINCE (third): “I’m so proud of both of my horses. Platinum Prince has been off for such a long time so he just ran out of gas at the end. Forgive is such a game horse. I’m so happy for the owners with Patricia’s Hope (Vince Foglia). When we bought this horse we took our time with him and he’s really improving. We were a bit nervous it was too quick to bring him back from his last start but he was doing so well training that we gave it a shot.” 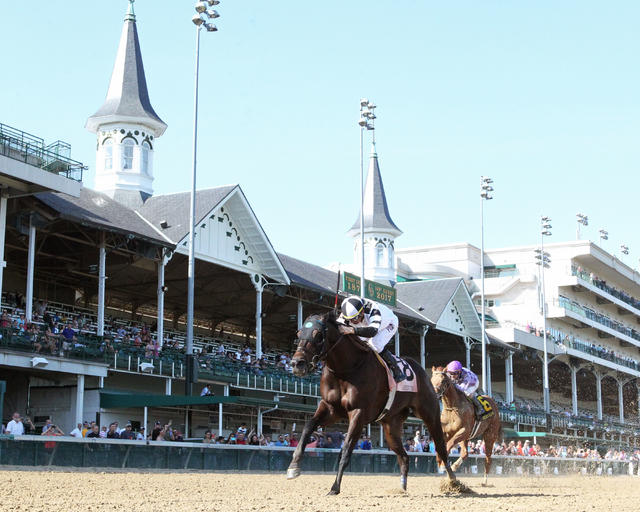