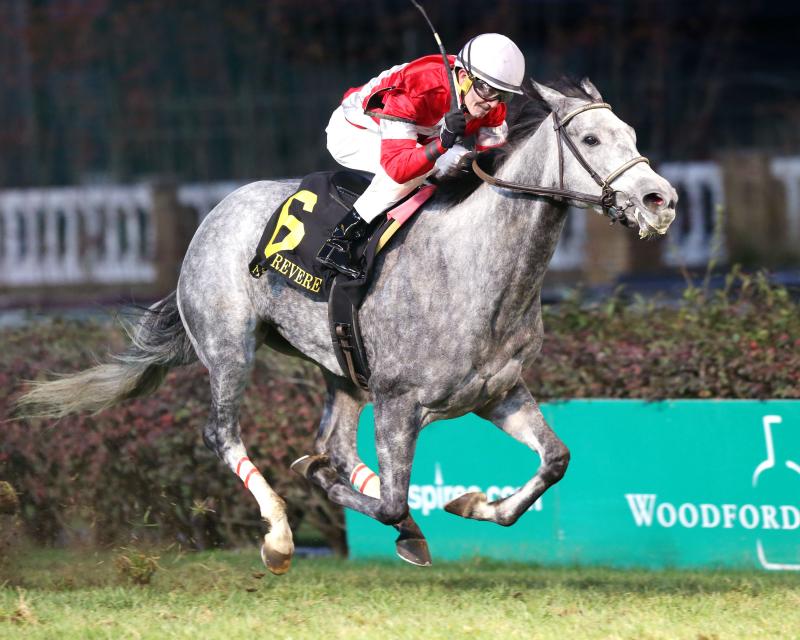 Janis R. Whitham’s homebred Linda turned back a challenge by Harmonize in the stretch and pulled away under Brian Hernandez Jr. to collect her first stakes victory in the $200,000 Mrs. Revere (GII) on the Matt Winn Turf Course. (Coady Photography, Churchill Downs) 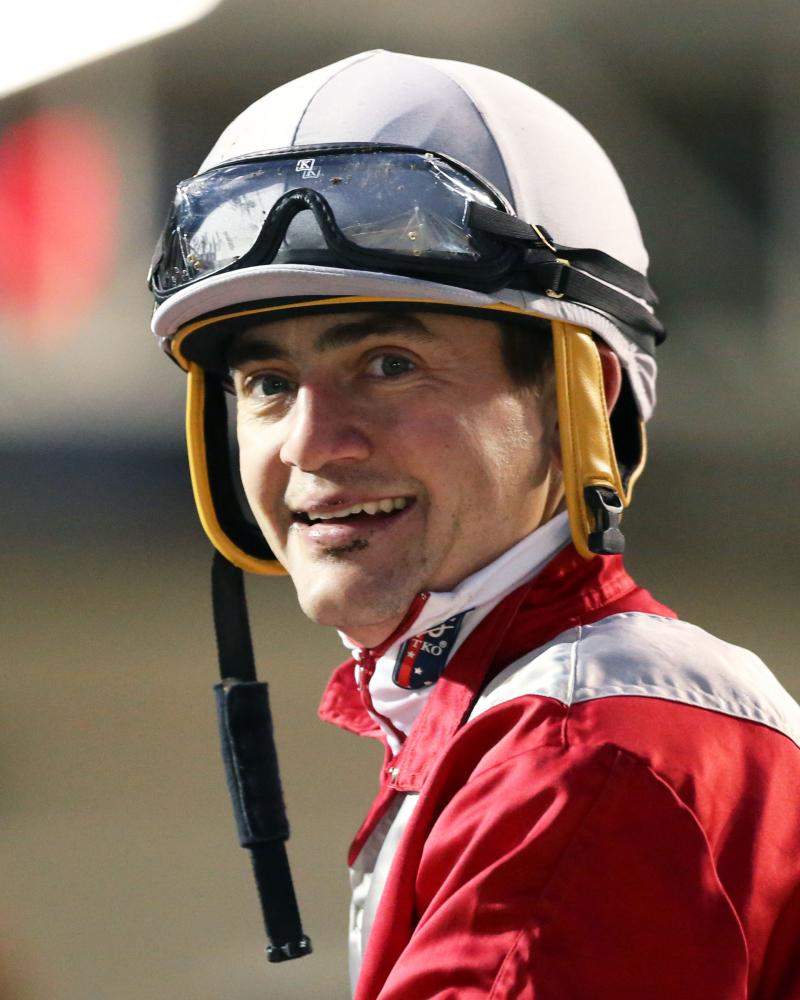 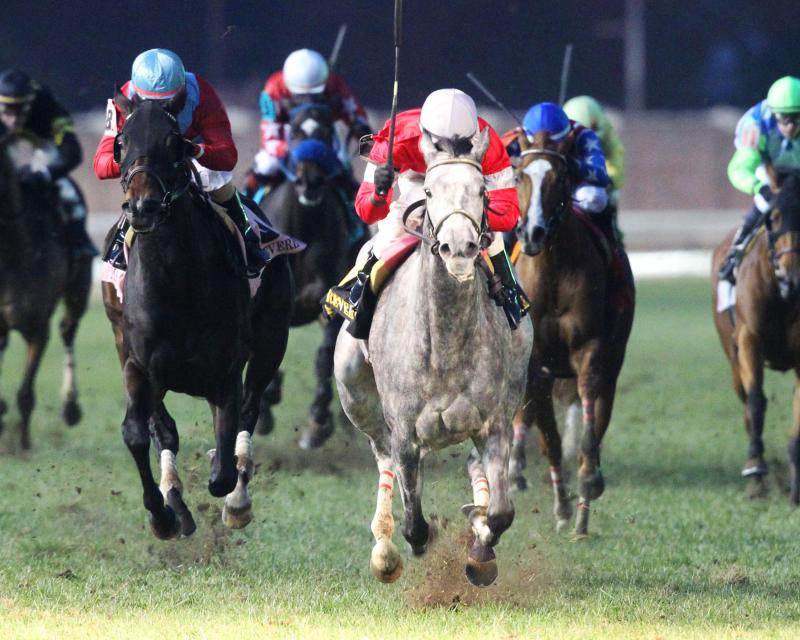 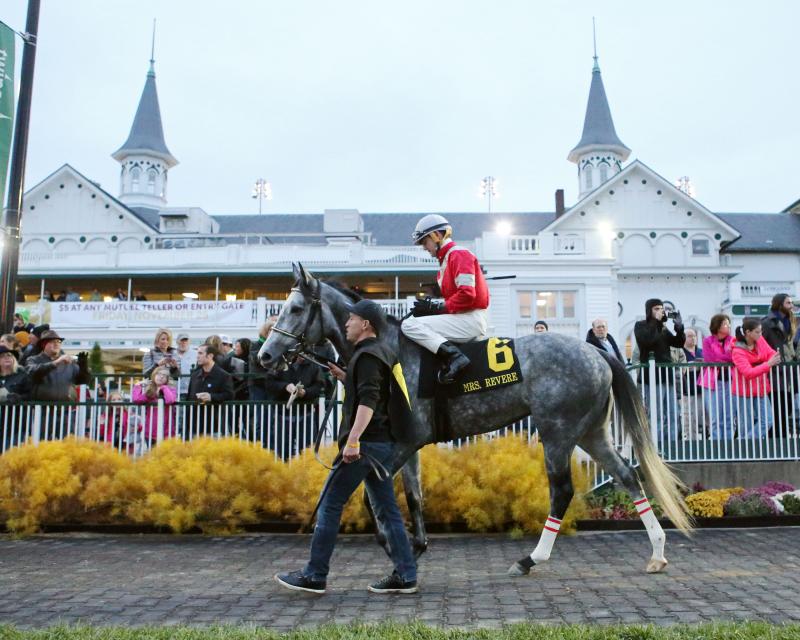 Janis R. Whitham’s homebred Linda rated nicely in the early stages, rallied wide on the turn for home and used a powerful closing kick to outrun Grade I Del Mar Oaks champ Harmonize down the stretch and win Friday’s 26th running of the $200,000 Mrs. Revere (Grade II) at Churchill Downs by 2 ½ lengths. The Mrs. Revere – the penultimate North American graded stakes race of the year for 3-year-old fillies on grass – was one of three stakes races on a 12-race “Black Friday” program at Churchill Downs. Earlier of the card, Finley’sluckycharm romped to win the 12th running of the $82,400 Dream Supreme Overnight Stakes. Later, 3-year-old Gun Runner won the 142nd running of the $500,000 Clark Handicap Presented by Norton Healthcare (GI).

Trained by red-hot duo of Ian Wilkes and ridden by Brian Hernandez Jr., Linda ran 1 1/16 miles in 1:44.63 over a Matt Winn Turf Course rated “firm” to collect the first graded stakes win of her career.

Wilkes has saddled five winners over the last two days, including stakes winners Linda and Thatcher Street, who prevailed in Thursday’s $100,000 River City Handicap (GIII). Also, Wilkes collected his 500th career winner on Thursday. Meanwhile, Hernandez has won a trio of stakes since Thursday. He was aboard Thatcher Street and Linda for Wilkes and rode Finley’sluckycharm to victory on Friday.

Whitham, Wilkes and Hernandez will team together again Saturday in the $200,000 Kentucky Jockey Club (GII) with promising 2-year-old colt McCraken, who is the 7-2 morning line favorite for the 1 1/16-mile race.

“That was a hell of a performance because that was a nice Grade I-winning horse (Harmonize) that she had held off,” Wilkes said. “Anytime you hold off a Grade I horse like that, and that’s our first stakes win with her, that’s a big performance. She was slow to develop as a baby and went through a few things but when she came to us she just blossomed and got better and better.”

Celestial Insight, Caren and Cross Country made the early running and led the field through fractions of :24.26, :48.61 and 1:13.57 as Linda had only three horses beaten as the group ran down the backstretch. As the field entered the turn for home, Linda commenced her winning move from eighth on the outside and quickly drew even with the leaders at the top of the lane. Harmonize drew even from the outside but Linda shook away from that rival in the final stages for the comfortable win.

“We had thought she would run that well but for her told hold off a challenge form Harmonize like she did,” Hernandez said. “That was real impressive.”

Linda, which means “beautiful” in Portuguese, is a gray daughter of Scat Daddy out of the Sunny’s Halo mare Beautiful Noise who was bred in Kentucky by her owner.

The Mrs. Revere is named in honor of Mrs. Revere, an accomplished Churchill Downs fan favorite in the mid-1980s. Mrs. Revere won 12 races in 28 starts, finished second seven times and earned $429,545 for Hall of Fame trainer Bill Mott. Her six wins in a dozen starts at Churchill Downs included stakes triumphs in the Regret, Dogwood and Edgewood in 1984 and the Kentucky Cardinal in 1985. She was owned by Drs. David Richardson and Hiram Polk, who have provided the winner’s trophy for the Mrs. Revere in each year of its existence.

IAN WILKES, trainer of LINDA (winner): “That was a hell of a performance because that was a nice Grade I-winning horse (Harmonize) that she had held off. Anytime you hold off a Grade I horse like that, and that’s our first stakes win with her, that’s a big performance. She was slow to develop as a baby and went through a few things but when she came to us she just blossomed and got better and better.”

Q: What made you decide to run her on the turf? “She wasn’t winning on the dirt. Horses in her family typically perform a lot better on the turf. Not sure what’s next. We’ll give her a little break, not a long one just a little break and I’ll talk to (owner) Mrs. (Janis) Whitham and make a plan for next win.”

BRIAN HERNANDEZ JR., jockey of LINDA (winner): “(Trainer) Ian (Wilkes) is having a great few days. The filly ran big for us today and everything’s going well. We had thought she would run that well but for her told hold off a challenge form Harmonize like she did. That was real impressive.”

KENNY McCARTHY, assistant to BILL MOTT, trainer of HARMONIZE (runner-up): “She made that big move around the turn and looked like she was going to get a big piece of it, but Ian’s (trainer Ian Wilkes) horse was just a little better than us today. She tries hard. I know he (Mott) was a little concerned about the cut in the ground – he said she really liked to hear her feet rattle. That was kind of what led us to take the wide path with her, just trying to find better ground. But I think she ran her race and Ian is just on fire this week.”

JUNIOR ALVARADO, jockey on HARMONIZE (runner-up): “I had a good trip. I was following that horse (Linda) and the (trainer Arnaud) Delacour horse (Hawksmoor). As it happened I was behind the 6 (Linda) the whole way around until a little before the five-sixteenths, and that’s when the 6 started picking it up. So I started moving forward at that point, too. I thought the only chance I had to beat her was to get the jump on her and get in front of her, and maybe she would get a little intimated. I did get in front of her, but she did not get intimidated at all and she came back and got me. Probably that having to move a little early cost me a little bit, too. But she ran her race. She always shows up. She’s a very nice filly.”

CHRIS LANDEROS, jockey on SWEET TAPPER (stablemate of Linda, third): “She was training well going up to the race and Ian thought our whole point was to get a little ‘black type’ under her for later down the road. She was training well going into the race and I just tried to be patient with her, get her a little confident and kick for home. She really ran a great race.” 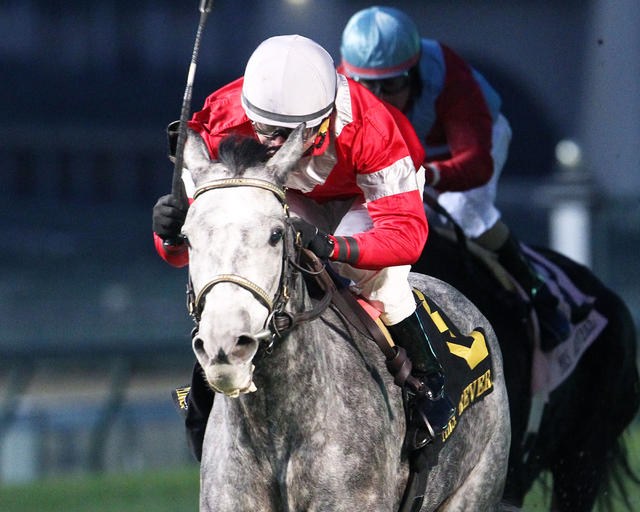