With just two weeks until the Breeders’ Cup World Championships returns to Churchill Downs for a record-equaling ninth nine, locally-based contenders Mind Your Biscuits, Seeking the Soul, Thunder Snow (IRE), Whitmore and Wonder Gadot logged their penultimate breezes for the Nov. 2-3 championship event on a chilly Friday morning beneath the historic Twin Spires.

Mind Your Biscuits, who has been based on the backstretch of Churchill Downs in Barn 18 since early September, worked six furlongs in 1:15 with jockey Tyler Gaffalione in the saddle and in company with possible Breeders’ Cup Dirt Mile (Grade I) contender Imperative (1:16.40) through splits of :13.40, :26.60, :39.40 and :51.80, before galloping out seven furlongs in 1:28 and one mile in 1:41.20, according to Churchill Downs clocker John Nichols.

“That was perfect ‘T,’” trainer Chad Summers said over the radio to Gaffalione. “Absolutely perfect.”

Mind Your Biscuits, the richest New York-bred in history with $4,279,566 in earnings, is targeting either the Breeders’ Cup Classic (GI), Dirt Mile or TwinSpires Sprint (GI), according to Summers.

“We’re just keeping our options open as we have been all year,” Summers said. “It was a really strong breeze and he’s doing great here at Churchill. The work itself may have started a bit too slow but I think visually it was good. The pre-entry deadline is Monday and we’ll go from there. We saw in the (1 1/8-mile) Lukas Classic he can stretch out and go long. We’ll just see what happens.”

Mind Your Biscuits, a 5-year-old chestnut-son of Posse, has eight victories through 24 starts including two victories in the Dubai Golden Shaheen (GI) and, most recently, a win in the Lukas Classic (GIII) at Churchill Downs.

“We’re very happy with the way he’s doing,” Godolphin’s travelling manager Tommy Burns said. “We gave him an extra blow today since he’s been pretty fresh. We’re very pleased with how it went.”

Trainer Saeed bin Suroor is expected to arrive to Louisville the week of the Breeders’ Cup, according to Burns.

“It was a really solid work,” trainer Dallas Stewart said. “I’m a big believer in following patterns. When I worked with Wayne (Lukas) through three of the Derby wins we had the same work pattern and it obviously worked out. I like breezing on Fridays to give us an extra day wiggle room in case of bad weather. That way if we have to push the work back, we’re not on top of the race if it’s on a Saturday, like the Classic is. We just hope we can get in the Classic.”

Just prior to Seeking the Soul’s work, Robert Lapenta, Southern Springs Stables and Head of Plains Partners’ top sprinter Whitmore breezed a half-mile in :47 inside of stablemate Petrov through splits of :11.60, :23 and :35 prior to galloping out five furlongs in 1:00.60, according to Nichols

“He’s a happy horse right now,” trainer Ron Moquett said. “It was a great breeze. He’s a naturally fast horse. Sometimes he can be tough to breeze because he can go that fast at the push of a button but when we try to get something easy into him it’s sometimes tough to hold him back.”

Rounding out the locally-based Breeders’ Cup contenders who breezed Friday morning was Gary Barber’s Longines Distaff (GI) contender Wonder Gadot, who worked five furlongs in 1:00 on the outside of stablemate Awesome Slew.

“It was a strong work,” trainer Mark Casse’s assistant Nick Tomlinson said. “Both horses breezed well together and (Wonder Gadot) galloped out strong. It was what we wanted to see two weeks prior to the race.”

Wonder Gadot, an Ontario-bred daughter of Medaglia d’Oro was most recently third in the Sept. 22 Cotillion (GI) at Parx behind Distaff competitors Midnight Bisou and Monomoy Girl.

Cox is scheduled to breeze three of his Breeders’ Cup contenders at 7:30 a.m. (all times Eastern), according to assistant trainer Jorje Abrego: Golden Mischief (Filly and Mare Sprint); Monomoy Girl (Longines Distaff) and Will Call (Turf Sprint). All three horses are stabled in Barn 22 at Churchill Downs.

Glyshaw, based in Barn 3 at Churchill Downs, is slated to breeze Turf Sprint contender Bucchero at 7:30 a.m. Saturday with jockey Fernando De La Cruz in the irons. Bucchero was the recent winner of the Woodford (GIII) at Keeneland.

Churchill Downs’ all-time leading trainer Romans is likely to breeze top 3-year-old sprinter Promises Fulfilled at 9 a.m. The recent winner of the Phoenix Stakes (GII) at Keeneland is scheduled to run in either the Breeders’ Cup Dirt Mile or TwinSpires Sprint, according to Romans.

Promises Fulfilled’s stablemate, Seven Trumpets, who finished third in the Gallant Bob (GIII) at Parx, is also expected to breeze Saturday at 9 a.m. and is targeting either the Dirt Mile or Sprint.

“He shipped in really well,” Thomas said. “Javier (Castellano) is scheduled to fly in Sunday to breeze him and we’re just happy to be here at Churchill. Anytime you can be here in early May for the Derby or in the fall when there’s a Breeders’ Cup it’s a good thing.”

Catholic Boy trained Thursday for the first time at Churchill Downs and will be based in Barn 41 through the Breeders’ Cup.

BREEDERS’ CUP PRE-ENTRY ANNOUNCEMENT ON WEDNESDAY – Pre-entered fields for the 2018 Breeders’ Cup World Championships will be announced via a live stream on the Breeders’ Cup website, Official Mobile App and Facebook page on Wednesday, Oct. 24 at 11:30 a.m. ET.

ARRIVALS/BARN LIST – All Breeders’ Cup contenders must be on the grounds 72 hours prior to their race. Many of the contenders will begin arriving between 7-10 days from the event, according to Churchill Downs’ Director of the Stable Area Steve Hargrave. Stay tuned for updates regarding arrivals following the pre-entry announcement on Wednesday, Oct. 24. 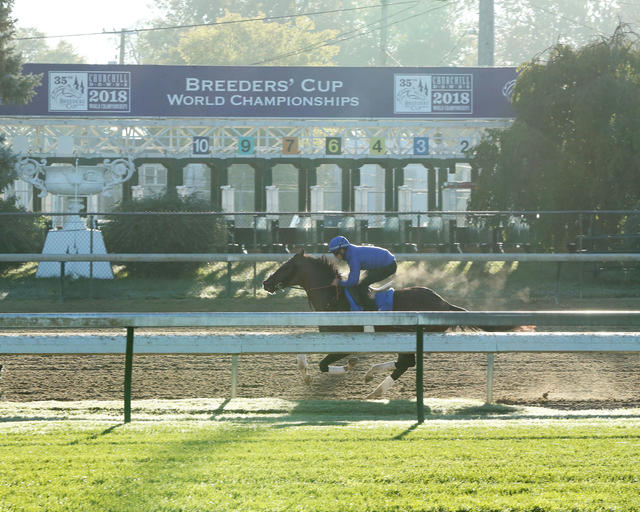