A little more than 16 months ago, then-retired Hall of Fame jockey Calvin Borel was living on trainer William “Buff” Bradley’s Indian Ridge Farm in Frankfort, Ky. On Friday, the 50-year-old rider will get a leg up to ride The Player as one of the favorites in Friday’s marquee race of Churchill Downs’ Fall Meet – the Grade I, $500,000 Clark Handicap Presented by Norton Healthcare.

“Buff has done so much for my career,” Borel said. “We’ve been through the lowest of lows and the highest of highs together. That’s what friends are for. We’ve been through it all. It’s very special to be able to ride this horse in such a big race for Buff.”

Bradley and Borel have been friends since the early 1990s. Borel has ridden some of Bradley’s top horses including $2 million earner Brass Hat and multiple Eclipse Award-winning mare Groupie Doll.

The Clark would be only the third time Borel would ride The Player for Bradley and co-owner Carl Hurst, as they most recently teamed to win Keeneland’s Oct. 28 Fayette (GII) by three lengths.

“Calvin rode a great race that day,” Bradley said. “The race was really emotional for me because I was thinking about my (late) dad (Fred) who bred The Player with us. He’d be really proud to know where we are at now with him.”

Borel has worked The Player in each of his most recent published workouts but a five-furlong bullet breeze on Nov. 17 installed some extra confidence in Bradley and Borel.

“I couldn’t get Calvin to stop smiling after he got back from the work,” Bradley said. “Calvin kept patting him and couldn’t say enough about how he went. He told me after the breeze ‘Buff, you have him in the perfect spot for this race. He couldn’t be doing things any better.’ I just hope that is the case.”

“I couldn’t imagine this horse coming into the race any better than he is,” Borel said. “He ran so well in his last start but has shown in the mornings no regression at all. Our fingers are crossed.”

The 1 1/8-mile Clark heads a trio of stakes races on Friday’s 12-race card that is traditionally the most popular racing day Churchill Downs’ Fall Meet. The main event is scheduled as the 11th race on the Friday program that also features the 27th running of the $200,000 Mrs. Revere (GII) for 3-year-old fillies on turf and the 13th running of the $80,000-added Dream Supreme Overnight Stakes for fillies and mares. Post time for Friday’s first race is 1 p.m. (EST).

Borel has one previous win in the Clark with Littlebitlively in 1999 for trainer Bobby Barnett. 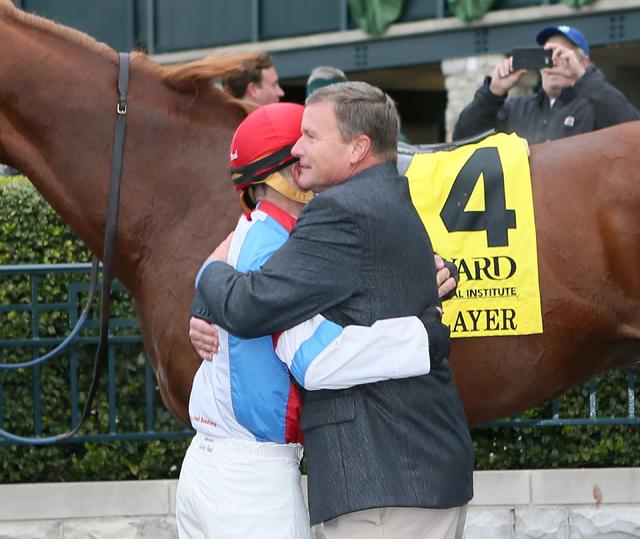