Calumet Farm’s multiple graded stakes-placed Bravazo has danced in all of the major dances of 2018 including all three legs of the Triple Crown, the Haskell Invitational (Grade I), Travers Stakes (GI) and the Breeders’ Cup Dirt Mile (GI). But Hall of Fame trainer D. Wayne Lukas believes the 3-year-old colt could be improving at the right time ahead of Saturday’s $500,000 Clark Handicap Presented by Norton Healthcare (GI) at Churchill Downs.

“Believe it or not, I think this horse is actually getting better with each start,” Lukas said. “I don’t think the one-mile distance was his best in the Breeders’ Cup but I thought the (Dirt Mile) was the better option instead of the Classic. I think the extra distance in the Clark will suit him great.

“We plan on running him next year as a 4-year-old. Let’s get this one under our belt and move on to next year. Maybe this is his turn. He shows up every single time we run him.”

The 3-year-old colt by Awesome Again will attempt to give Lukas a record-tying third win in the race after previously winning with Will Take Charge (2013) and Surfside (2000). Both of Lukas’ previous winners were 3-year-olds that cemented year-end divisional championship honors.

Bravazo finished third in the Nov. 3 Dirt Mile, 2 ½ lengths behind runner-up Seeking the Soul, who is listed as the 8-5 morning line favorite in the Clark. The Calumet homebred’s campaign was highlighted by runner-up finishes in the Preakness (GI) and Haskell and a third-place effort in the Travers.

The three-time winner will have the riding services of Joel Rosario in the Clark Handicap, who was assigned 118 pounds and is 9-2 on Mike Battaglia’s morning line odds.

One race prior to the Clark, Pebbles Stakes winner Stella di Camelot (IRE) was made the 2-1 morning line favorite for the 28th running of the $200,000 Mrs. Revere (GII).

Stella di Camelot previously ran in France with Gianluca Bietolini prior to her being transferred to trainer Chad Brown’s care in the spring.

All jockeys are assigned 118 pounds.

Knicks Go, a speedy son of Paynter, led wire-to-wire in the Oct. 6 Breeders’ Futurity (GI) at Keeneland at odds of 70-1. The Maryland-bred, owned by KRA Stud Farm and trained by Ben Colebrook, finished 2 ¼ lengths behind the Bob Baffert-trained Game Winner in the Breeders’ Cup Juvenile at odds of 40-1.

One of Colebrook’s targets for Knicks Go was the Dec. 4 Marylander at Laurel Park but the 40-year-old conditioner opted to enter the colt in Saturday’s race. Jockey Albin Jimenez has the return call and will break from post position 13.

“We decided to just keep him home for this race and this could be his final start before the (Feb. 9) Sam F. Davis (GIII),” Colebrook said.

Chief among Knicks Go’s competitors in the Jockey Club is Breeders’ Cup Juvenile third-place finisher Signalman, who is the 5-2 second choice on the morning line for owners Tommie Lewis, David Bernsen and Magdalena Racing and trainer Kenny McPeek. Signalman finished one length behind Knicks Go in the Juvenile after breaking from post 14 and rallying from 10 lengths off the early pace.

All riders are assigned 122 pounds.

Restless Rider, a grey daughter of Distorted Humor, finished 5 ½ lengths behind wire to wire winner Jaywalk in the Juvenile Fillies. Trained by Kenny McPeek, Restless Rider scored an ultra-impressive 11 ¼ length win in the Debutante Stakes in late June at Churchill Downs and a 2 ½-length score in the Alcibiades (GI) at Keeneland in October.

FIRST DERBY FUTURE WAGER OF YEAR OPENS THURSDAY; BAFFERT HAS SEVEN PROSPECTS – Seven horses conditioned by Hall of Fame trainer and five-time Kentucky Derby winner Bob Baffert, are among the 24 betting interests in Pool 1 of the 2019 Kentucky Derby Future Wager, which kicks off a four-day run at Churchill Downs on Thanksgiving Day.

Unbeaten Sentient Jet Breeders’ Cup Juvenile (Grade I) winner Game Winner heads the Baffert arsenal and is the 8-1 individual favorite on veteran odds maker Mike Battaglia’s morning line. The pari-mutuel field of “All Other 3-Year-Old Colts and Geldings” is expected to be the overall first-pool favorite for the 21st consecutive year and Battaglia projects it to close as the 7-5 choice.

New to Pool 1 this year is an option for bettors to wager on “All 3-Year-Old Fillies,” which is projected by Battaglia to close at odds of 30-1.

DOWN THE STRETCH – There was a $188,386 carryover in the 20-cent Single 6 Jackpot to begin Thursday’s card. The Single 6 sequence began in Race 7 at 2:24 p.m. … Trainer Dale Romans began Thursday four wins away from 2,000 career victories and had 15 entries Thursday-Saturday. ... Friday there will be a special merchadise sale on the backstretch of Churchill Downs that will feature Triple Crown jackets, hats, tee shirts and more from 70-80 percent off retail value. The sale will occur from 8 a.m. - noon on the basketball court near the Recreation Hall. 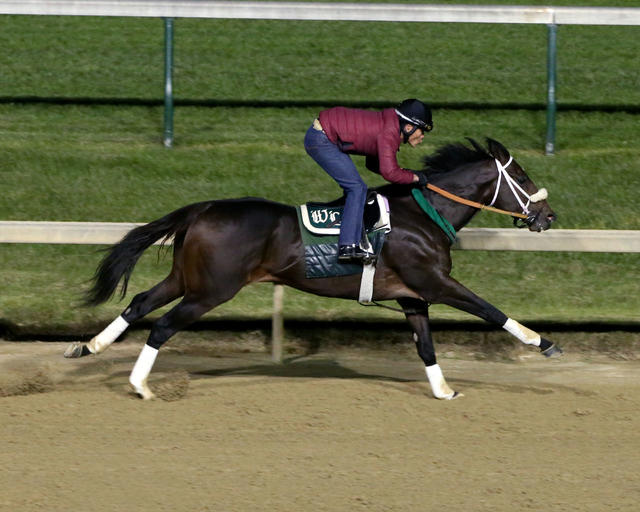