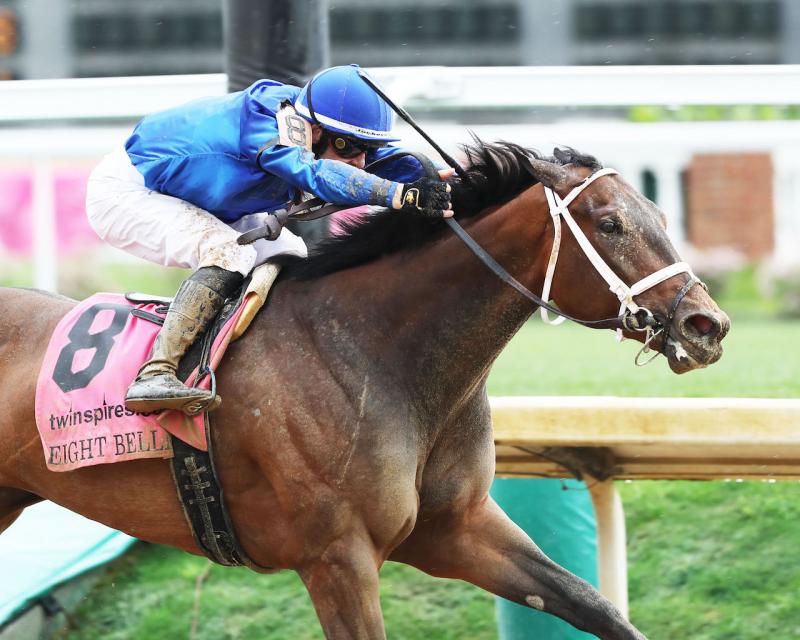 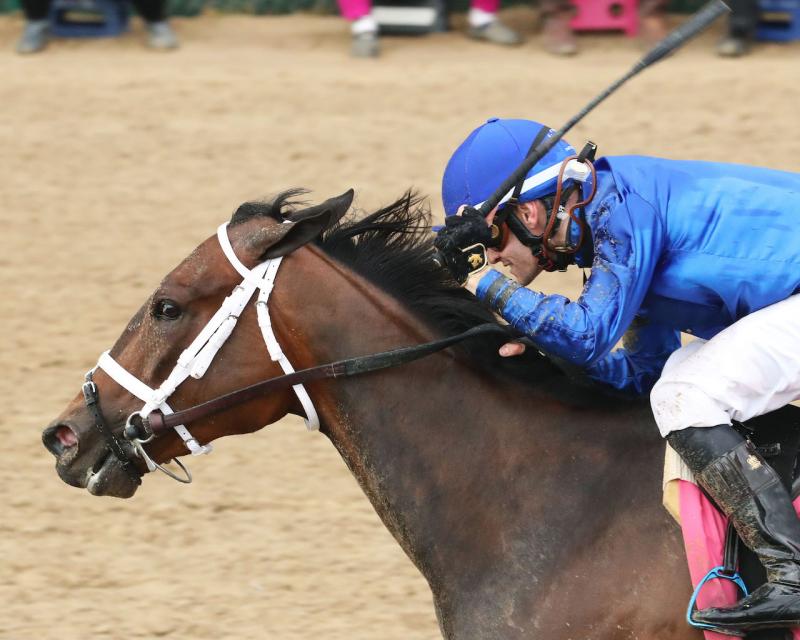 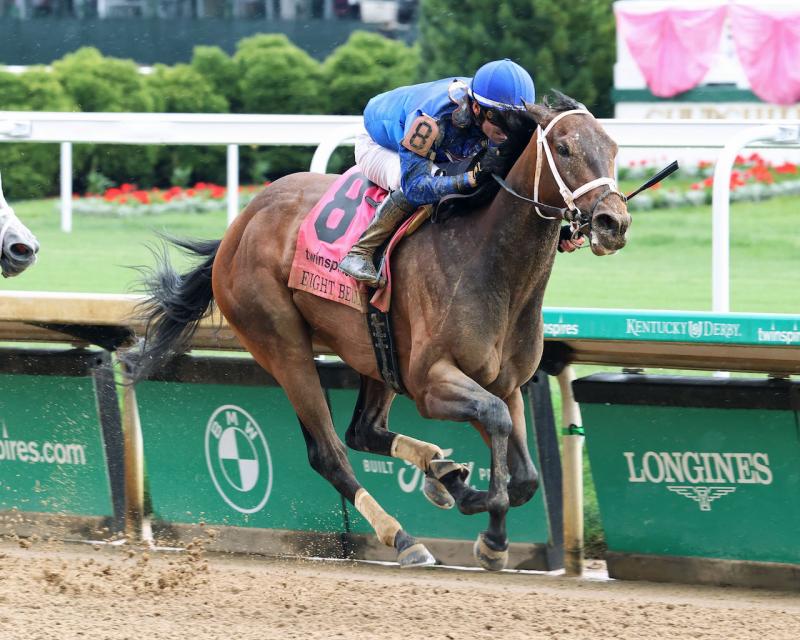 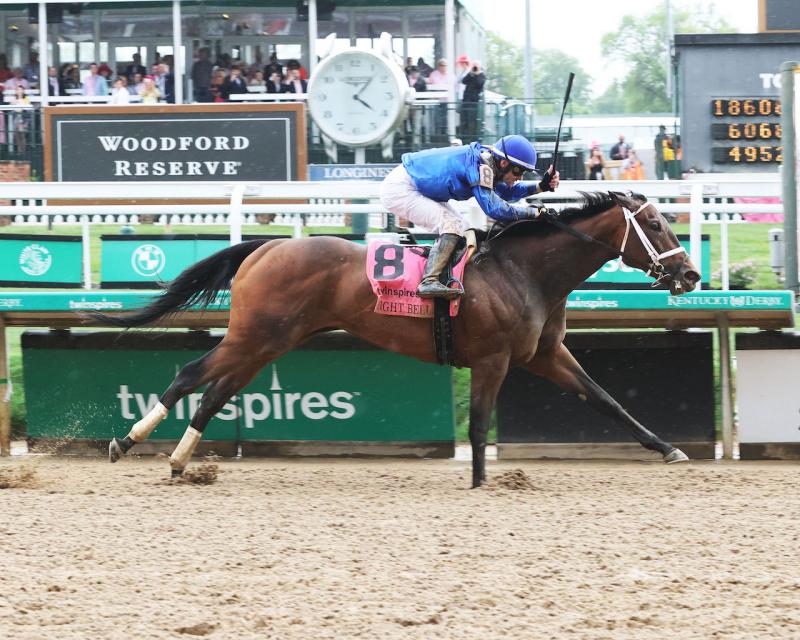 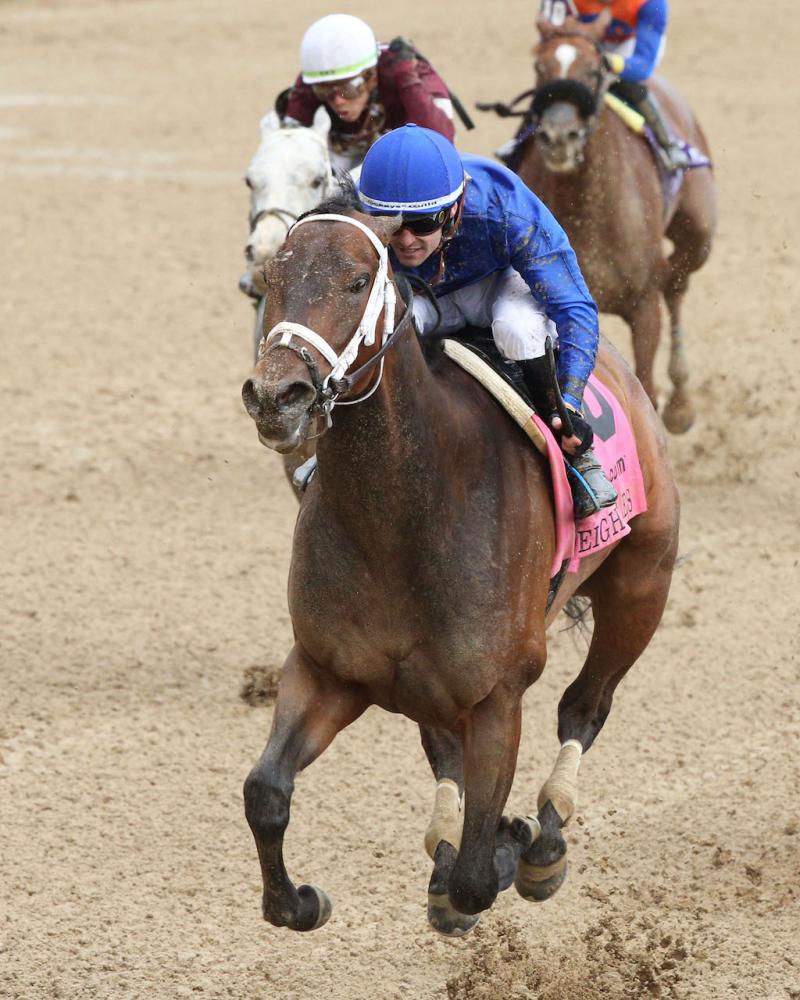 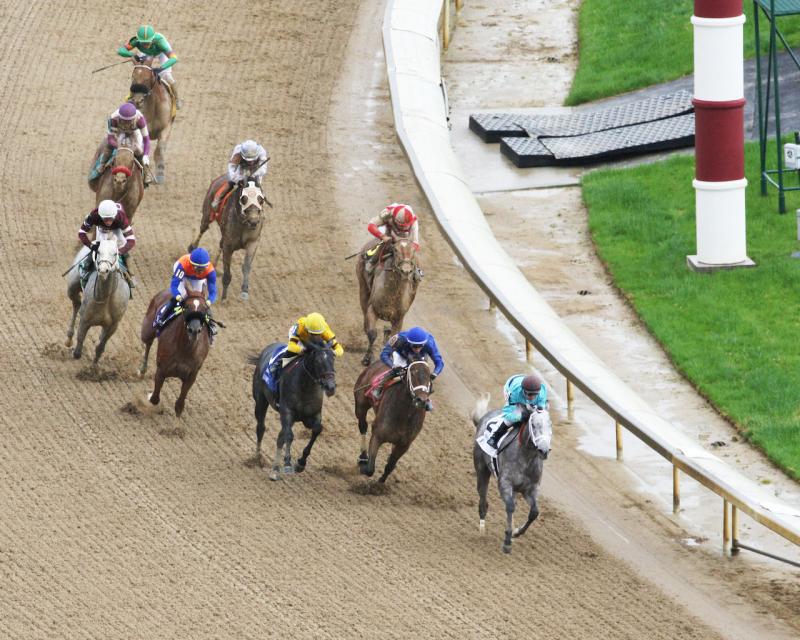 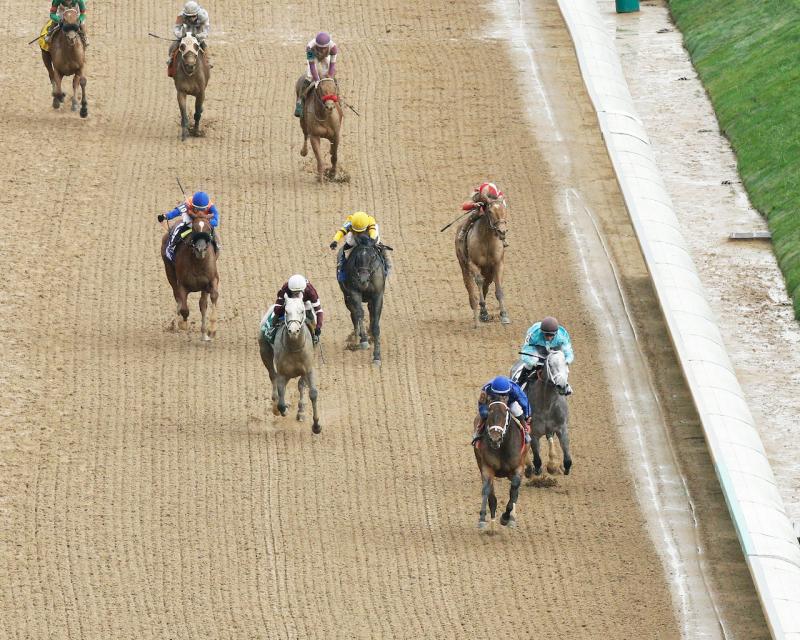 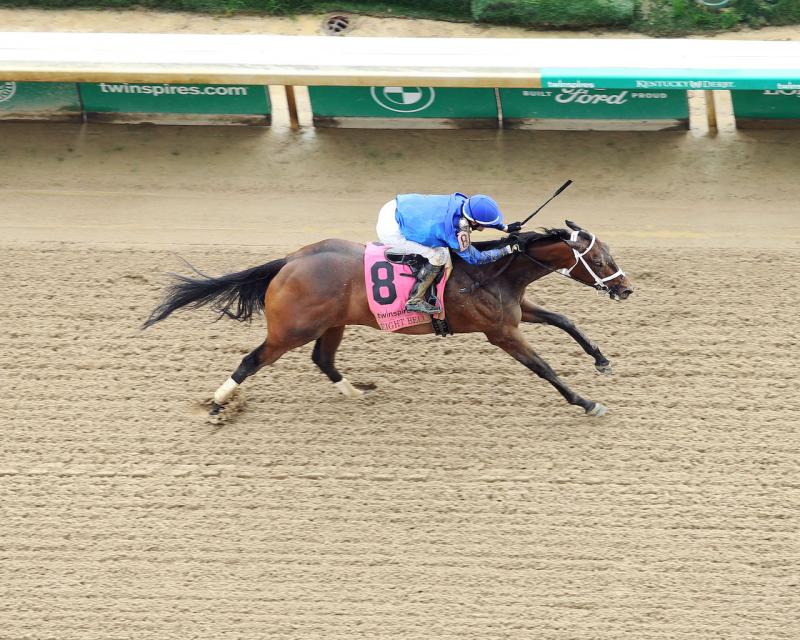 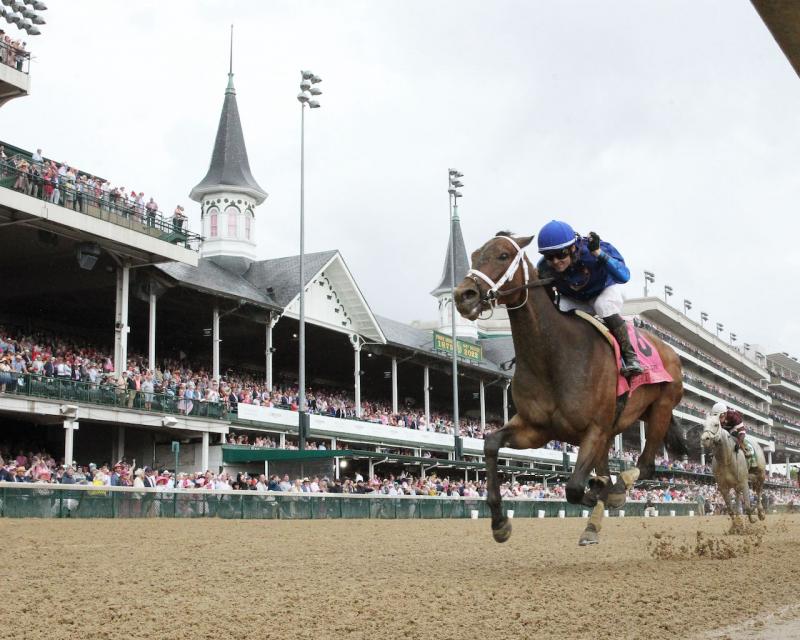 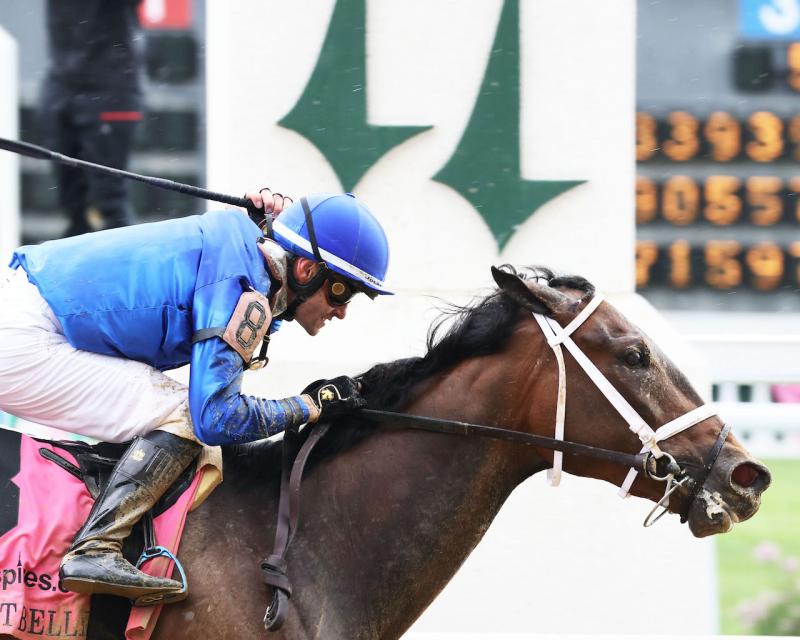 Godolphin’s homebred Matareya roared past pacesetting Pretty Birdie at the eighth pole and cruised to a 2 1/4-length victory in the 67th running of the $500,000 Eight Belles (GII) presented by TwinSpires for 3-year-old fillies Friday afternoon at Churchill Downs.

Trained by Brad Cox and ridden by Flavien Prat, Matareya completed the seven furlongs on a fast track in 1:21.86.

Pretty Birdie shot to the front out of the gate and quickly opened a daylight advantage through fractions of :22.27 and :44.72 as Prat moved Matareya to the inside after breaking from post eight.

On the far turn, Prat angled Matareya off the inside and pulled abreast of Pretty Birdie, racing on even terms to the eighth pole when Matareya began to draw away.

Matareya is a Kentucky-bred daughter of Pioneerof the Nile out of the Bernardini mare Innovative Idea. Now a two-time stakes winner, Matareya has compiled a 7-4-2-0 record and earned $671,867 that includes Friday’s $297,600 check.

Flavien Prat (Jockey, Matareya, winner) – “She broke well but I just got outrun in the first part. Then I took a chance going to the inside where there were good horses to follow. Then we had a fair pace, was traveling well and when I tipped her out, she was there for me. I thought it was a really good run for her.”

Brad Cox (Trainer, Matareya, winner) – “She stepped up and ran a huge race. I’m very proud of her. It was heads-up riding by Flavien (to quickly get to the inside). They kind of started to get away from her the first eighth of a mile, three-sixteenths of a mile. We thought she might be a little closer to the pace. But he didn’t panic, he let her kind of find her stride, save some ground in the turn, tipped out, and defeated a very good filly (Pretty Birdie). He put himself in a good position down the backside, so she didn’t have to do too much work heading for home.”

Cox also won with Juju’s Map, his other top filly, in an allowance optional claiming.

“The Acorn’s going to be interesting five weeks from now. Both are good fillies. This filly is probably going to do her best going around one turn. Juju’s Map definitely can handle two turns. At some point, they’re going to sort themselves out, and if they meet up in the Acorn, I don’t know. I was running her back in three weeks and five days, so she had to be doing extremely well for me to do that. She ran a big number last time, she did respond well, and she showed us in the mornings that she was ready to run..”

Norm Casse (Trainer, Pretty Birdie, second) – “She’s very very quick, very very talented. I can’t say anything wrong. I’m happy. That’s the trip I expected. We got beat by a really nice horse today but there’s definitely more in the tank for Pretty Birdie, and we’re gonna figure it out.”

“No I feel like we got beat today because we haven’t had a seven-eighths race and the filly that beat us did. Now, we got that under our belt, she knows to navigate that trip a little bit differently next time. It might make the difference.” 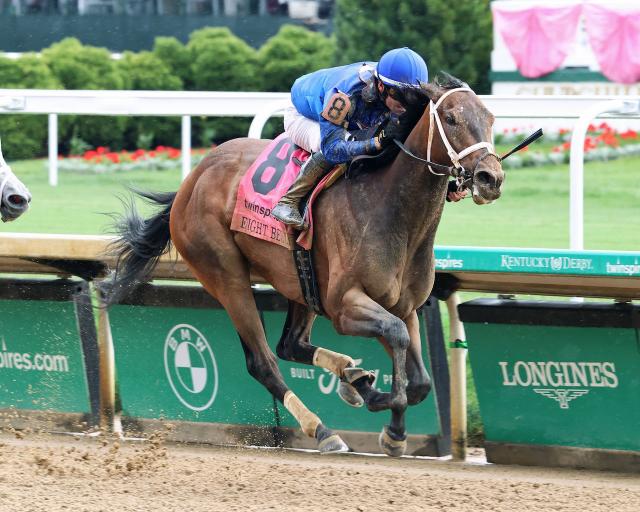