Nov 17, 2021
Darren Rogers, Churchill Downs Communications
LOUISVILLE, Ky. (Sunday, Nov. 14, 2021) – Nominations to the Grade I, $750,000 Clark presented by Norton Healthcare closed Saturday. The full list of nominees will be released in the upcoming days but here is a look at some of the known likely runners for the 147th renewal of the 1 1/8-mile race, according to Churchill Downs assistant racing secretary and stakes coordinator Dan Bork.

• Code of Honor (19-7-5-2—$2,951,320) – Will Farish’s homebred Code of Honor dominated the $1.25 million Travers (GI) in 2020 for his first Grade I victory. The 5-year-old son of Noble Mission (GB) trained by Shug McGaughey recently finished second behind fellow Clark probable Independence Hall in the Fayette (GII) at Keeneland. Code of Honor finished second in last year’s Clark to Bodexpress.

• King Fury (11-4-1-1—$599,449) – Three-time stakes winner King Fury finished third in the Fayette last out for trainer Kenny McPeek. Owned by Fern Circle Stables and Three Chimneys Farms, the chestnut son of Curlin will attempt to become the first 3-year-old to win the Clark since Gun Runner in 2016.

• Maxfield (10-7-2-1—$1,550,902) – Owned by Godolphin and trained by Brendan Walsh, the multiple graded stakes winner will attempt to notch an elusive Grade I victory as an older horse to his résumé. The talented 4-year-old son of Street Sense is a perfect four-for-four at Churchill Downs including a convincing 3 ¼-length victory in the $600,000 Stephen Foster (GII). Horses have won both the Stephen Foster and Clark seven times but it has not been accomplished in the same year.

• Midnight Bourbon (12-2-5-3—$1,094,920) – Winchell Thoroughbreds’ Midnight Bourbon was prominent in this year’s Triple Crown campaign. The 3-year-old son of Tiznow trained by Steve Asmussen finished sixth in the $3 million Kentucky Derby presented by Woodford Reserve (GI) and second in the $1 million Preakness (GI). Following an eventful run in the $1 million Haskell (GI) where he clipped heels and did not finish, Midnight Bourbon sports back-to-back runner-up efforts in the $1.25 million Travers (GI) and $1 million Pennsylvania Derby (GI). This will be his first race against elders.

• Militarist (8-2-0-2—$91,630) – J. and J. Stable and Priscilla Vaccarezza’s two-time winner Militarist finished fifth in the Fayette at odds of 39-1 for trainer Carlo Vaccarezza. The longshot hope cruised to an impressive 1 ¾-length win over the turf at Ellis Park three months ago.Entries to the Nov. 26 Clark will close Sunday, Nov. 21. The Clark is one of six stakes events on closing week of the 132nd Fall Meet. One day prior to the Clark, on Thanksgiving, Juddmonte’s multiple graded stakes winner Bonny South is slated to battle with defending champion Envoutante in the $500,000 Falls City (GII). On Saturday, Nov. 27, the $400,000 Kentucky Jockey Club (GII) and $400,000 Golden Rod (GII) will award points to the Top 4 finishers on a 10-4-2-1 scale for the Road to the Kentucky Derby and Road to the Kentucky Oaks. The “Stars of Tomorrow II” program will also feature the inaugural runnings of the $200,000 Lively Shively and $200,000 Fern Creek. 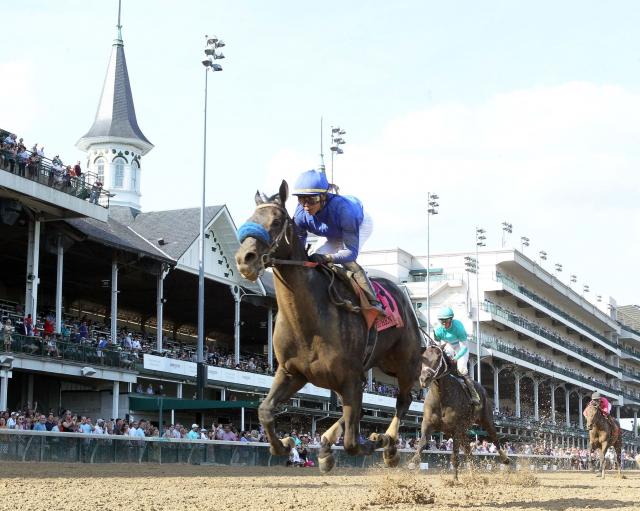