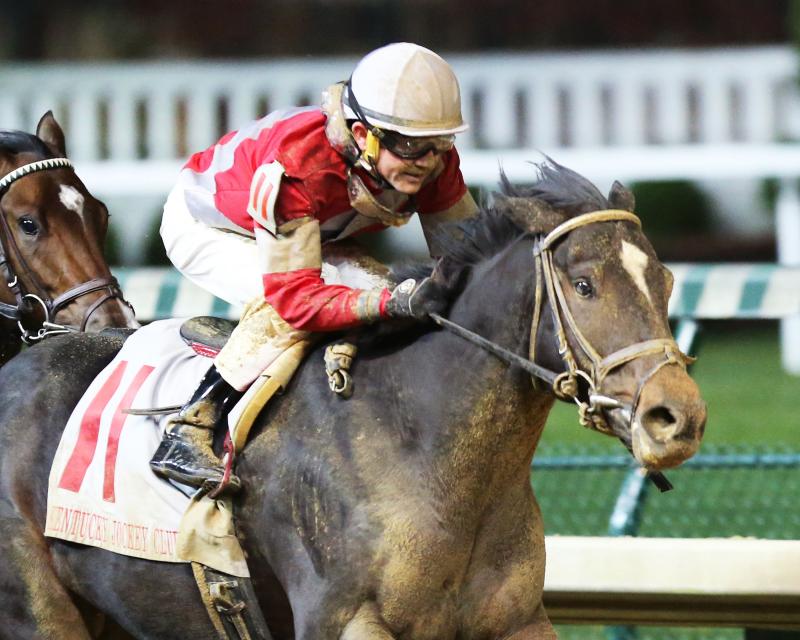 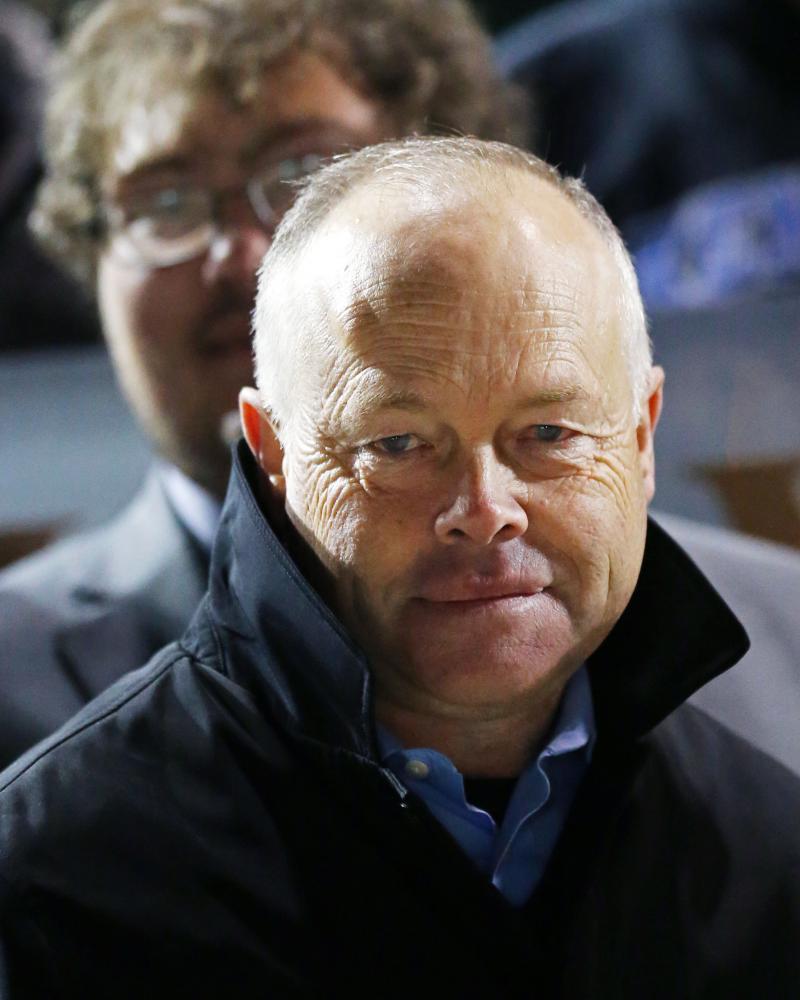 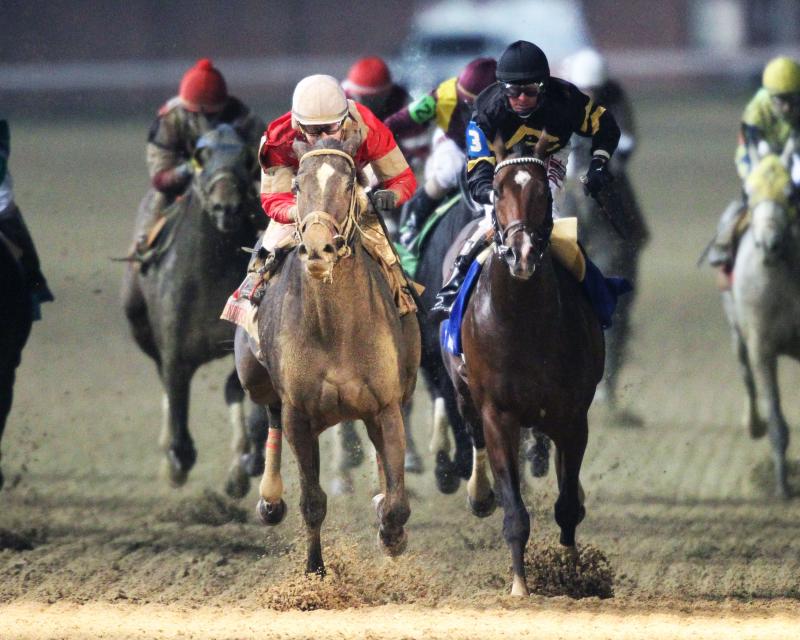 McCraken, who broke from post 11, was ahead of only one horse at the start of the Kentucky Jockey Club Stakes (GII) at Churchill Downs. He rallied to win by 1 1/4 lengths to remain unbeaten in three career races. (Coady Photography, Churchill Downs)

Whitham Thoroughbreds LLC’s unbeaten odds-on favorite McCraken unleashed a powerful run on the far turn under Brian Hernandez Jr. as he rallied from next-to-last in a field of 12 to catch Wild Shot in the final sixteenth of a mile and pulled away to 1 ¼-length victory in Saturday’s 90th running of the $200,000, Grade II Kentucky Jockey Club Stakes for 2-year-olds at 1 1/16 miles at Churchill Downs.

McCraken broke from post 11 in the field of 12, but overcame his outside start to continue a memorable Thanksgiving weekend for his trainer and jockey. It was the third graded stakes victory in as many days for the duo, who joined forces to win the $100,000 River City Handicap (GIII) on Thanksgiving Day with Thatcher Street and Friday’s $200,000 Mrs. Revere (GIII) on turf with Whitham Thoroughbreds’ 3-year-old filly Linda.

The 4-5 favorite in the Kentucky Jockey Club, McCraken paid $3.60, $2.40 and $2.40. Runner-up Wild Shot, the 4-1 second wageing choice trained by Rusty Arnold and ridden by Corey Lanerie, finished 3 ¾ lengths clear of the third-place finisher and returned $4.40 and $3.60. The Churchill Downs Racing Club’s Warrior’s Club, trained by Hall of Famer D. Wayne Lukas and ridden by Robby Albarado, edged Uncontested by a head for third and returned $3.60 to show.

McCraken, who is named after a town in Kansas, completed the 1 1/16-mile Kentucky Jockey Club distance over a fast track in 1:44.15.

“He is as good as I thought he was and he handled it well,” Wilkes said. “They didn’t hand it to him. It wasn’t easy. He came through for us.”

“I believe we are getting (Kentucky) Derby fever,” said Clay Whitham, co-owner of McCraken. “Winning this race definitely gives us expectations that he’s a good horse. We’ll see how it goes. Obviously you don’t want to get too far ahead in this business, but he’s a very nice horse.”

In extending his unbeaten string that also includes a victory in Churchill Downs’ $80,000 Street Sense to three races, McCraken collected a first-place prize of $115,320 to boost his career earnings to $190,848.

Uncontested, who started in the outside post, was hustled to the early lead by jockey Channing Hill and was pursued by Wild Shot, longshot Romeo O Romeo and Warrior’s Club through fractions of :23.46 for a quarter mile, :47.38 for a half-mile and six furlongs in 1:12.01. McCraken beat only one horse out of the starting gate and bided his time in ninth through the opening six furlongs before he started picking up rivals with a six-wide rally on the far turn. Wild Shot moved to challenge the pace-setting Uncontested on the far turn, wore down that rival and gained a small lead before he was tackled to his outside by the surging McCraken. The winner surged past Wild Shot in the final yards and edged clear to his final margin under a hand ride by Hernandez.

Silent Decree, who was far back in 11th-place through much of the opening six furlongs, rallied to finish fifth, and was followed past the finish by Shareholder Value, Just Move On, Perro Rojo, Jocker Justice, Han Sense, Total Tap and Romeo O Romeo.

The Kentucky Jockey Club was the co-featured event on Churchill Downs’ “Stars of Tomorrow II” Day that also included the $200,000 Golden Rod Stakes (GII) for 2-year-old fillies, which was won by Coffeepot Stables’ Farrell. The 12-race program was devoted entirely to races for 2-year-olds.

Churchill Downs will wrap-up its 21-day Fall Meet on Sunday with a 12-race program. There’s a $173,889 carryover in the Single 6 Jackpot and that pool has a mandatory payout because it’s closing day. The sequence covers Races 7-12. Post time for the first race of the day is 1 p.m. (all times Eastern) and the Single 6 begins at 3:57 p.m.

CLAY WHITHAM, co-owner of McCRAKEN (winner): “He’s named after a small town in Kansas. We just drive through there a lot. It’s super exciting to have a good 2-year-old, it’s very exciting. We’ve raced a lot of nice horses but we’ve never had one that we had considered a Derby prospect since Mud Route and that was a long time ago. I believe we are getting Derby fever. Winning this race definitely gives us expectations that he’s a good horse. We’ll see how it goes. Obviously you don’t want to get too far ahead in this business, but he’s a very nice horse.”

IAN WILKES, trainer of McCRAKEN (winner): “He is as good as I thought he was and he handled it well. He needed that race tonight, he needed a little test. He had to really run tonight, they didn’t hand it to him. It wasn’t easy. He came through for us. He had to really belly down and run so that was good. He’s got a tremendous turn of foot. He was in a great spot and I thought that (jockey) Brian (Hernandez Jr.) rode him well and I was very pleased with his performance tonight. He’s got a great mind, a great turn of foot and he has the ability. I’m going to enjoy tonight, the hype around him has been unbelievable all week. The hype has been tremendous but I just want to enjoy this for one and map out a plan with (owner) Mrs. (Janis) Whitham and just not get ahead ourselves.”

BRIAN HERNANDEZ JR., jockey of McCRAKEN (winner): “Anytime you get a good 2-year-old like this you start thinking Derby, but we’ll just sit down with Ian (Sunday) morning and we’ll map out a plan from here. He’s a boy but he’s growing up and he’s getting it all together. He was a lot more settled today and in his last race he hadn’t run in a while but today he did everything the right way.”

RUSTY ARNOLD, trainer of WILD SHOT (second): “I thought we had a chance to hold him off for a minute but we didn’t. (McCraken) was a little better than him tonight.”

COREY LANERIE, jockey of WILD SHOT (second): “My horse pulled but still ran a great race. I take nothing away from the winner who is a nice horse. My horse fought right to the wire.”

D. WAYNE LUKAS, trainer of WARRIOR’S REWARD (third): “He’s a solid little horse that really tries every time. He’s dependable, you can count on him. He’s definitely overachieving in a lot of ways. The top two finishers are nice and he beat a good one in the 12-horse (Uncontested). He sure is getting valuable!”

ROBBY ALBARADO, jockey of WARRIOR’S CLUB (third): “If this horse makes it to the Derby, that’ll be a story of a lifetime. I’ll tell you what, this Racing Club is so good for racing. If we can get 10 percent of these owners to branch off on their own every year, that’ll be great for the game.

“The blinkers have really helped. It just got him into the race a little more. A lot of that also comes with maturity. He could develop into a good horse. He got have conceded today when that other horse passed him, but he stayed, which is really, really encouraging. That’s good.”

CHANNING HILL, jockey of UNCONTESTED (fourth): “We had a good trip. He’s got so much class and he’s so quick. He jumped into the turn nice and settled perfectly. He’s just a little on the unseasoned side. He ran a really good race. You talk about the winner? Those are good horses.”

WAYNE CATALANO, trainer of UNCONTESTED (fourth): “He was a little green and not seasoned enough. It wasn’t the best post in the world. We’re happy with his race.” 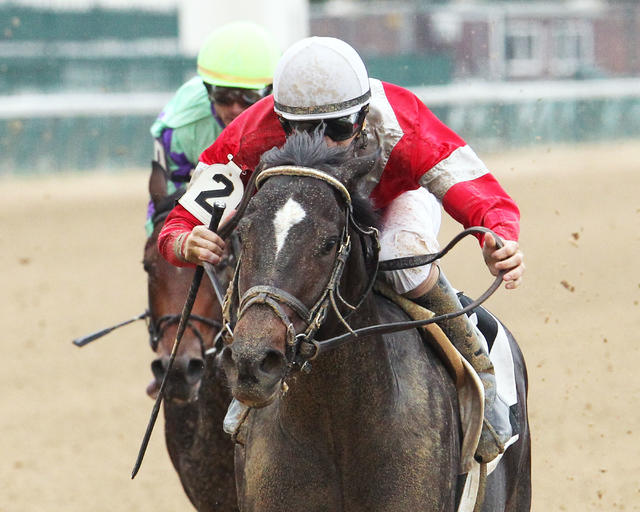