Jeff Hiles, a former U.S. Marine and longtime assistant to trainer Kenny McPeek, is set to start the next chapter in his life by stepping out on his own and becoming a trainer.

“This has been something I’ve thought about for a long time,” said Hiles, a native of Frankfort, Ky., “I talked with Kenny about a month ago that I was ready to make the move and he’s been supportive of everything. I am going to finish out the meet and help ship his horses to Florida. I’ll stick around at Churchill after they are gone, and hopefully by that time claim three or four more, and be ready for Oaklawn this winter.”

Hiles, 38, has experienced many facets of life including serving five years in the Marines and eventually earning his way to becoming McPeek’s assistant after working his way up from a groom and hot walker.

“I always wanted to get into horse racing; it’s in my blood,” said Hiles, the son of veteran trainer Rick Hiles, who has trained horses at Churchill Downs for more than 40 years. “I worked off and on prior to the Marines with horses but stepped away completely in 2001 to serve our country. Once I finished my service I worked in construction and auto sales but always had the end goal to be in horse racing as my career. I took out my trainer’s license to claim a couple of horses on my own and start things from scratch. But, just like the Marines, I thought I needed to work my way through the ranks. I worked my tail off to begin my career with Kenny. I sort of did anything we needed around the barn – clean stalls, groom, push feed carts and hot walk. I was based at Keeneland for a while and when the opportunity at Churchill came about Kenny trusted me to step up.”

Hiles has experienced the true tragedies this sport can be faced with after he was one of the first people on scene when his exercise rider, Odanis Acuna, passed away Saturday.

“It’s been a really tough few days,” Hiles said. “There were times over the last couple of days when I thought to myself if I really wanted to do this anymore. Then, after a couple of failed attempts at claiming a horse, my owner (Mickey Bailew) finally got one on Sunday (Say It Softly in Race 10) and I felt reenergized. I still had that thought on Monday morning when I woke up but when I got back to the barn and saw her in the stall, I knew this is what I wanted to do.

“Horse racing is a lot of work but well worth it in the long run. I love this sport and my country. I’m glad I was able to serve in the Marines; then return to the industry I love.”

THIS WEEK AT CHURCHILL DOWNS – Only two weeks or 10 days remain in the 21-day Fall Meet at Churchill Downs and racing continued Wednesday for a five-day week beneath the historic Twin Spires with a first post of 1 p.m. (all times Eastern).

Entries were taken Wednesday for Saturday’s featured race, the $100,000 River City Handicap (Grade III) for 3-year-olds and up at 1 1/8 miles on turf that was expected to feature multiple graded stakes winner Mr. Misunderstood for trainer Brad Cox.

Multiple graded stakes winner Streamline was installed as the 5-2 second choice on Mike Battaglia’s morning line odds as she faces five rivals in a conditioned allowance race on the turf Thursday. Jockey Chris Landeros, who won three races on Sunday’s program, has the call.

G. Watts Humphrey Jr.’s homebred Net is set to make her debut in Race 7 on Thursday for trainer Rusty Arnold II. The 2-year-old filly by Curlin is out of Humphrey’s four-time winning stakes mare Let, who most notably won the Churchill Downs Distaff Handicap (GII) (now known as the Humana Distaff) in 1999. Net is the half-sister to former Mrs. Revere Stakes (GII) winner Centre Court, who also was trained by Arnold.

The final episode of the 2018 season of “Inside Churchill Downs” is set to air Friday at 6 p.m. on ESPN 680/105.7. The one-hour horse racing radio show features prominent trainers, jockeys and insider handicappers. Listen live at www.espnlouisville.com.

MILESTONE WATCH – Trainer Dale Romans was five wins away from 2,000 career victories. The South Louisville native began the week with 1,995 victories and had two entries Wednesday and one Thursday. 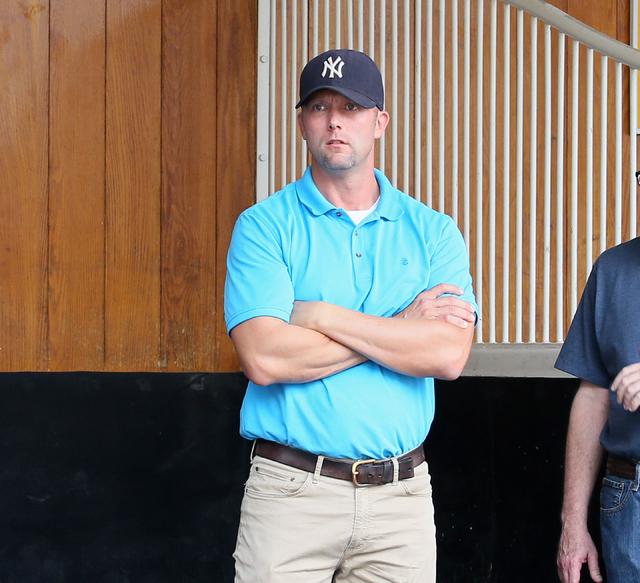