McPeek Looks Ahead to Stars of Tomorrow with Signalman, Restless Rider

It arguably has been one of the most difficult meets of veteran trainer Kenny McPeek’s 34-year career with the passing of exercise rider Odanis Acuna last Saturday. But the lifelong horseman hopes to move forward into next weekend’s Stars of Tomorrow II program with talented juveniles Signalman and Restless Rider in the $200,000 Kentucky Jockey Club (Grade II) and $200,000 Golden Rod (GII), respectively.

“Moving forward we still need to remember and cherish the life of Odanis,” McPeek said. “It’s been such a tragic week for our entire operation. The racing community really stepped up and donated more than $100,000 to the Go Fund Me page that will help his wife and children for the future.”

“We’re really excited about both of these horses in their own rights,” McPeek said. “Signalman, which was a very inexpensive purchase ($32,000 at the 2017 Fasig Tipton October Sale), is a really big, strong colt. When he drew the outside post in the Juvenile, I told Brian (Hernandez Jr.) to just take back to find a spot at the rail. I thought he ran a very credible race with the way the track was playing and can only improve from that in the Jockey Club.

“Restless Rider ran great in the Juvenile Fillies behind Jaywalk, who won wire to wire. She definitely has the potential to make the Kentucky Oaks in the future. She reminds me a lot of Take Charge Lady and should only get better into next year.”

Signalman, who stands more than 17 hands tall according to McPeek, finished second behind Knicks Go in the Oct. 6 Breeders’ Futurity (GI) at Keeneland prior to his third-place effort at 60-1 in the Breeders’ Cup Juvenile.

“Distance should definitely not be a problem for him,” McPeek continued. “He’ll get a break after the Kentucky Jockey Club and point to starts as a 3-year-old in the Derby prep races.”

Restless Rider trounced the competition by 11 ¼ lengths in the Debutante Stakes in late June at Churchill Downs after getting stopped entering the far turn. The Distorted Humor filly then finished second in the Spinaway (GI) at Saratoga before winning the Alcibiades (GI) by 2 ½ lengths at Keeneland.

“Just like Signalman, Restless Rider will also get a little bit of a break after this race,” McPeek said. “We’re on our home court so we decided to take a chance to run right back here in the Golden Rod.”

The 12-race Stars of Tomorrow II program has launched the careers of many Grade I winners and champions including 2017 Horse of the Year Gun Runner, 2010 Kentucky Derby winner Super Saver and 2012 Clark Handicap hero Shackleford.

Entries for Saturday’s program will be taken on Wednesday.

CHEF DANIELSON AND TEAM READY FOR THANKSGIVING TRADITION AT CHURCHILL DOWNS – With more than 3,000 pounds of turkey ready to be carved, alongside all of the fixings, Thanksgiving Day at Churchill Downs has been a Louisville, Ky. tradition for nearly a half-century.

“It’s probably our busiest day of the year outside of Derby Week and the Breeders’ Cup,” said Levy Restaurants’ David Danielson, the Executive Chef at Churchill Downs. “We start preparing the meal months in advance to ensure we have enough food to serve everyone attending. Since we have to order so much food, especially turkeys, we have to start planning our shipments months ahead of time.”

Trained by New York-based Danny Gargan, Divine Miss Grey (22-11-5-1—$807,672) rallied from just off the early pace in the Chilukki to defeat four rivals as the 4-5 favorite. The Kentucky-bred filly previously finished second by 3 ¼ lengths in Belmont Park’s $400,000 Beldame Invitational (GI) on Oct. 6 after winning the $182,000 Dr. James Penny Memorial Stakes at Parx by 7 ¾ lengths in September.

“I’m likely going to send 30 horses to Lexington next spring,” Gargan said. “So, hopefully we’ll be (at Churchill Downs) a lot more next year with horses like this one.”

Thanksgiving’s renewal of the Falls City is scheduled as the 11th event on a 12-race program that begins with a special first race post time of 11:30 a.m. (all times EST). The Falls City shares the holiday racing spotlight with the 45th running of the $100,000 Cardinal Handicap (GIII) for fillies and mares 3-year-olds and up at 1 1/8 miles on the Matt Winn Turf Course. The Falls City has a scheduled post time of 4:22 p.m., while the Cardinal Handicap is set for 3:24 p.m.

THANKSGIVING WEEKEND STAKES TAKING SHAPE – Six graded stakes races cumulatively worth $1.4 million highlight closing week of the 21-day Fall Meet at Churchill Downs. Below are the probable entrants to Saturday’s Stars of Tomorrow II program which will be drawn Wednesday, according to Assistant Racing Secretary and Stakes Coordinator Dan Bork:

DOWN THE STRETCH – Racing continued Sunday with a first post of 1 p.m. (all times Eastern). There is a massive $173,820 carryover in the 20-cent Single 6 Jackpot which gets underway in Race 5 at 3:03 p.m. … Trainer Brad Cox is one win away from 1,000-career victories. Cox had three horses entered at Churchill Downs and two at Fair Grounds on Sunday. … The first of four Kentucky Derby Future Wagers will get underway Thursday-Sunday along with the Kentucky Derby Sire Future Wager. The fields will be announced Monday. For more information, visit: https://bit.ly/2j6m0qy. 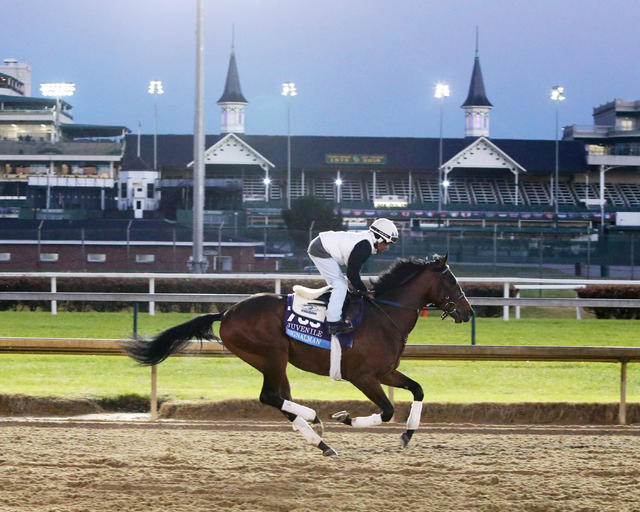