Memorable on-track performances by racing’s current and future stars and a strong and attractive schedule of special events combined for a successful September Meet at Churchill Downs Racetrack as the racing and entertainment session completed its 11-day run on Sunday, Oct. 2.

Equine exploits during the meet included victories by Albaugh Family Stable’s Not This Time in the $150,000 Iroquois Presented by TwinSpires.com (Grade III) and Normandy Farm’s Daddys Lil Darlin in the $200,000 Pocahontas Presented by TwinSpires.com (GII), races that kicked off the respective Road to the Kentucky Derby and Road to the Kentucky Oaks points systems that will determine the fields for the 2017 renewals of the Kentucky Derby Presented by Yum! Brands (GI) and Longines Kentucky Oaks (GI). Both races also were part of the roster of Breeders’ Cup “Win & You’re In” events and Not This Time earned a spot in the starting gate for the $2 million Sentient Jet Breeders’ Cup Juvenile (GI) at Santa Anita on Saturday, Nov. 5, while Daddys Lil Darlin secured a start in the $2 million 14 Hands Winery Breeders’ Cup Juvenile Fillies (GI) on the same day.

Other outstanding performances include a triumph by John C. Oxley’s Noble Bird in a battle of winners of Churchill Downs’ Grade I Stephen Foster Handicap in the fourth running of the $150,000 Lukas Classic. Noble Bird, winner of the 2015 Foster, turned back a group of rivals that included 2016 Foster winner Bradester, who finished third. GMB Racing’s Tom’s Ready upset reigning Eclipse Award sprint champion and 2015 Breeders’ Cup Sprint (GI) winner Runhappy in a stirring renewal of the $100,000 Ack Ack Presented by TwinSpires.com (GIII), earning the winner a likely bid for the $1 million Las Vegas Breeders’ Cup Dirt Mile (GI).

Human stars during the fast-moving September racing session included leading jockey Robby Albarado, who has the third-highest victory total in Churchill Downs history but earned only the second riding crown of his career beneath the Twin Spires, and Louisville native Dale Romans, who collected a 14th “leading trainer” crown at his hometown track, and Nicholasville, Ky.’s Ken and Sarah Ramsey, who led all owners in September to extend their record for total “leading owner” titles to 27.

Despite soggy weather conditions on the Matt Winn Turf Course that prompted all seven scheduled turf races to be moved to the main track during the meet’s final four days, 928 horses competed in 109 races during the September Meet for an average of 8.5 starters-per-race – the highest average in the meet’s four-year history. Starters during the 11-day meet in 2015 totaled 868, also in 109 races, for an average of 8.0 horses-per-race.

September Meet special events remained strong, led by the “Downs After Dark Presented by Stella Artois and Woodford Reserve” night racing on Saturday, Sept. 24 that attracted a record September Meet crowd of 16,768 fans. The evening carried a “Bourbon, Bets & Bow Ties” theme and included musical performances by Louisville-based Linkin’ Bridge, stars of season 11 of NBC’s “America’s Got Talent,” and Kentucky-born cellist and composer Ben Sollee. The previous record attendance for a September “Downs After Dark” celebration was the 15,487 recorded on Sept. 28, 2013.

“Our fourth September Meet was gratifying on every level and we thank the support of fans in our region and throughout the country for its outstanding racing program and to the on-track fans who enjoyed the entertainment events in mostly-favorable weather during this special month,” said Kevin Flanery, president of Churchill Downs Racetrack. “September racing was a completely new product for us when the meet was introduced in 2013 and we continue to learn and adjust, but we are pleased with the results and by the reaction from fans who are now making Churchill Downs racing a regular part of their plans for a busy time of the year.

“We appreciate the support of horsemen in Kentucky and throughout the region for September racing. This meet was created in response to requests by horsemen for help in filling a gap in the Kentucky racing schedule and the record number of horses-per-race during the meet, the ongoing strengthening of our September stakes schedule and the growth of all aspects of the still-new product are clear evidence that the concept is working for all parties and all of Kentucky racing.”

The second Churchill Downs riding crown by Albarado was his first at the Louisville track since the 2008 Spring Meet. The 43-year-old Louisiana native rode 15 winners during the 11-day meet – a total that included a dominant victory aboard the exciting 2-year-old Not This Time in the Iroquois and a win aboard One Mean Man in the $100,000 Jefferson Cup. Albarado’s crown came at the expense of fellow Louisianans Corey Lanerie and Brian Hernandez Jr., who tied for the runner-up spot with 12 wins apiece. James Graham, Channing Hill and Miguel Mena finished in a tie for fourth with seven wins, and nine-time riding leader Julien Leparoux rode six winners. While he did not challenge for the riding crown, Hall of Fame jockey and three-time Kentucky Derby winner Calvin Borel returned to the saddle following a brief retirement and piloted four winners during the meet.

The Iroquois victory by Not This Time also was a highlight for Romans, whose six September Meet wins were just enough to hold off recently-inducted Hall of Famer Steve Asmussen and his five wins for the title. Romans now has 677 career victories at Churchill Downs – second in track history – and continues to gain on all-time leader Bill Mott, who has 694 career wins at the track. Chris Hartman, Buff Bradley and Kenny McPeek each saddled four winners during the meet.

The Ramseys earned their latest title with a victory by Task Force Glory in the 108th of 109 September races. That win was the third of the meet by a horse carrying the familiar red-and-white Ramsey silks and it enabled the couple to break free of logjam that included eight other owners who had earned a pair of victories during the meet.

Other impressive equine winners during the meet included Paul Lichtefeld and Jack Stewart’s Engaginglee, who earned her first stakes triumph with a upset win in the $100,000 Locust Grove Presented by TwinSpires.com (Grade III) for fillies and mares ages three and up; Mines and Magic, who remained unbeaten in three races at Churchill Downs for owner G. Watts Humphrey Jr., the chairman of the board of Churchill Downs Incorporated, with a victory over 3-year-old fillies in the $100,000 Dogwood Presented by GE Appliances (Listed); L.T.B. Inc. and Hillerich Racing’s One Mean Man, who took the off-the-turf Jefferson Cup (Listed) for trainer Bernie Flint; and Fioretti, who surprised in the $100,000 Open Mind for jockey Sophie Doyle and owners Two Hearts Farm LLC and Don Janes.

In another notable contest, Quarter Moon Ranch LLC’s reigning Arabian Horse of the Year Paddy’s Day romped to an easy 8 ¼-length win the $100,000 President of the United Arab Emirates Cup Sponsored by the Abu Dhabi Sports Council (GI). Borel was in the saddle aboard the winner of the race for purebred Arabians 3-year-olds and up.

There was considerable traffic at the Churchill Downs claims box during the just-concluded September Meet. Fifty-three horses were claimed for a total of $1,018,000. The claims generated $61,080 in sales tax for the Commonwealth of Kentucky.

Racing at Churchill Downs resumes after a brief break with the Fall Meet, which opens its 21-day run on Sunday, Oct. 30 and continues through Sunday, Nov. 27. The 2016 Fall Meet schedule features 13 stakes events with total purses of $2.08 million. That schedule consists of nine graded stakes races and four overnight stakes contests. Each of the latter will offer a purse of $70,000-added. 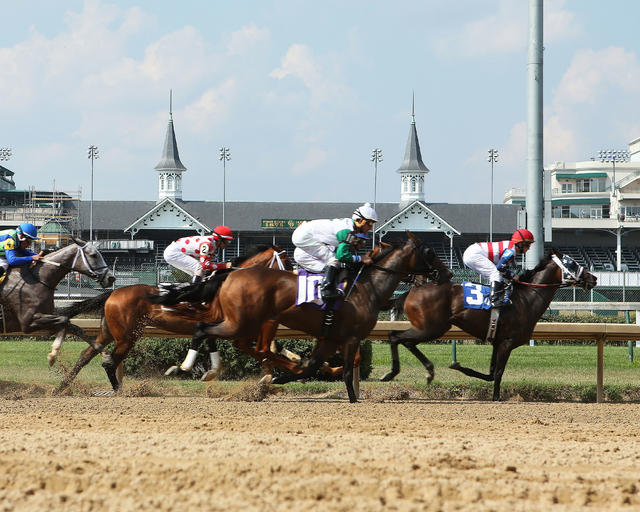