Meru worth watching after encouraging comeback

May 29, 2020
Kellie Reilly/TwinSpires.com
Meru returned in the 8th race on Memorial Day

Several 3-year-olds have raised their profiles with wins during the Churchill Downs Spring Meet, but one deserves mention for a fine comeback effort in defeat – Meru.

Meru was last seen finishing best of the rest in Independence Hall’s record-setting Nashua (G3) at Aqueduct on Nov. 3. The son of Sky Mesa had won his first two starts sprinting at Monmouth Park. After a romp in his debut, Meru withstood intense pace pressure and forged clear in the Sept. 21 Smoke Glacken. The runner-up that day, As Seen on TV, took a Florida-bred stakes next time out, lost a duel in the Mucho Macho Man, and placed a distant third in the Fountain of Youth (G2).

Although Independence Hall and As Seen on TV have since fallen off the Kentucky Derby (G1) trail, Meru struck me as a very promising type, and likely a one-turn specialist. His performance on Memorial Day renewed that impression.

The 3-1 odds second choice drawn on the outside of the 8-horse field, Meru broke outward but soon flashed speed to range alongside the contested pace. Jockey Jose Ortiz opted to ease back rather than get hung out four-wide in a speed duel, and Meru kindly rated a couple of lengths off the leaders in fourth.

Meanwhile, front-running Echo Town rattled off fast fractions of :21.61 and :44.99 and shook free of his early pressers entering the stretch. Digital then loomed a threat, circling out wide and outmoving Meru, but ultimately stalled as Echo Town dug in.

Whether through inexperience or ring-rustiness, Meru was still on his left lead trying to launch a rally when Digital pounced. Just when Meru appeared on the verge of getting traction, he found himself tightened up between Digital and a tiring Johnny Ritt.

But once Ortiz got him organized and into the clear, Meru picked up strongly, and he gained ground fast in the final sixteenth. From two lengths adrift at the eighth-pole, he crossed the wire just a half-length and a neck off Echo Town and Digital, respectively.

Meru has a right to improve for this tightener. Echo Town posted a snappy time of 1:09.05, and Meru’s 94 Brisnet Speed and 95 Late Pace ratings aren’t far off his career-best Speed (100) and Late Pace (97) figures earned in the Smoke Glacken. If he makes a similar degree of progress second time out this season, Meru would be sitting on a big effort next.

Bred by Godolphin and purchased by his current connections for $300,000 as an OBS April juvenile, Meru comes from a good family. His dam, the Elusive Quality mare Lady Lavery, is a half-sister to multiple Grade 2 victress Skylighter (by Sky Mesa and thus a three-quarter sister to Meru).

Lady Lavery is also a half to English stakes scorer Speckled, dam of stakes winner Pixelate, who just finished second in the May 23 War Chant at Churchill. Meru’s second dam, the Broad Brush mare Painted Lady, is a full sister to multiple Japanese stakes warrior Nobo True. Meru’s third dam is multiple Grade 1 heroine and noted producer Nastique, whose other descendants include Michita, winner of the 2008 Ribblesdale (G2) at Royal Ascot. 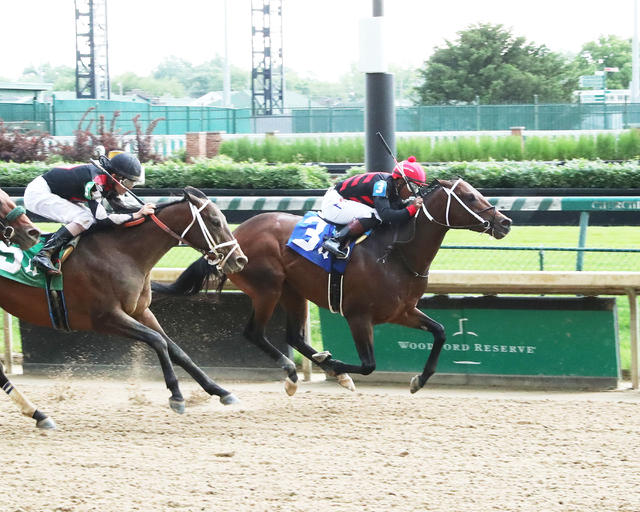