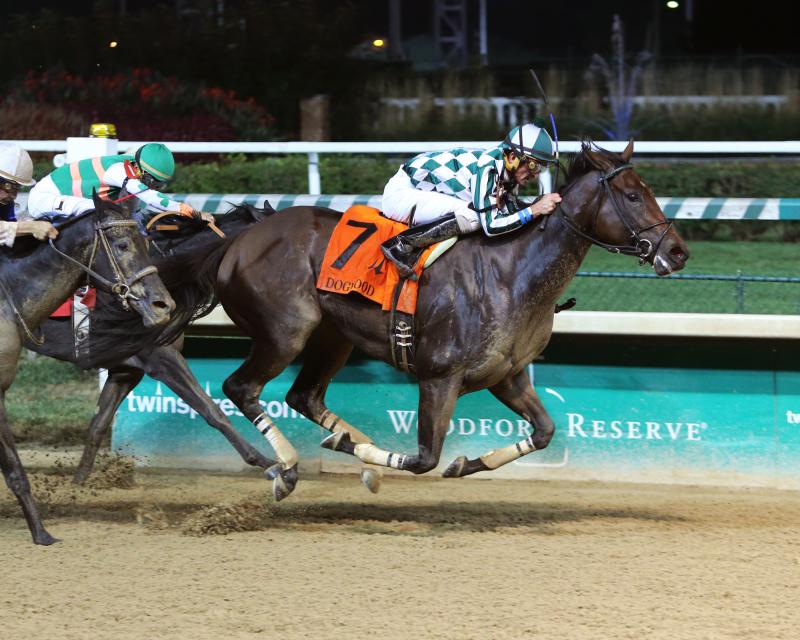 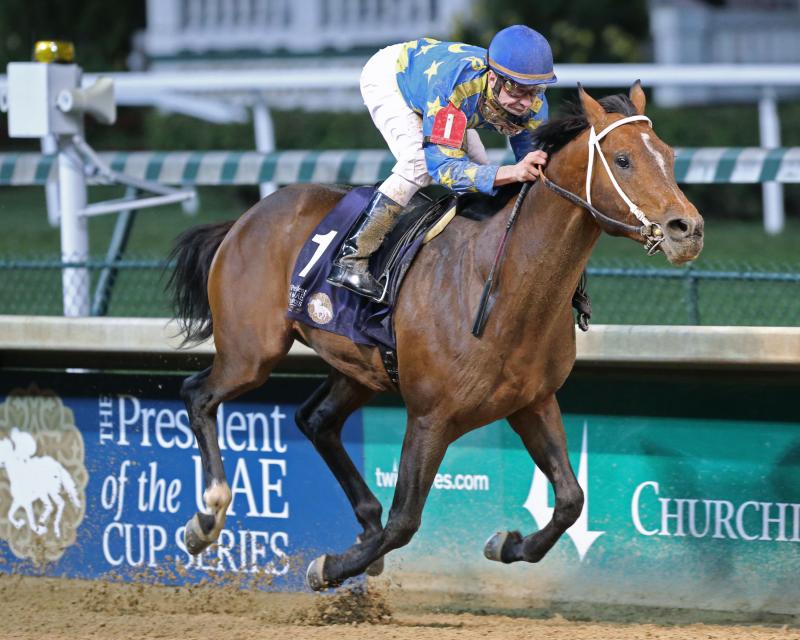 Favored Paddys Day and jockey Calvin Borel cruised to an easy victory in the $100,000 President of the United Arab Emirates Cup Sponsored by the Abu Dhabi Sports Council (Grade I) for purebred Arabians 3-years-old and up. (Coady Photography, Churchilll Downs) 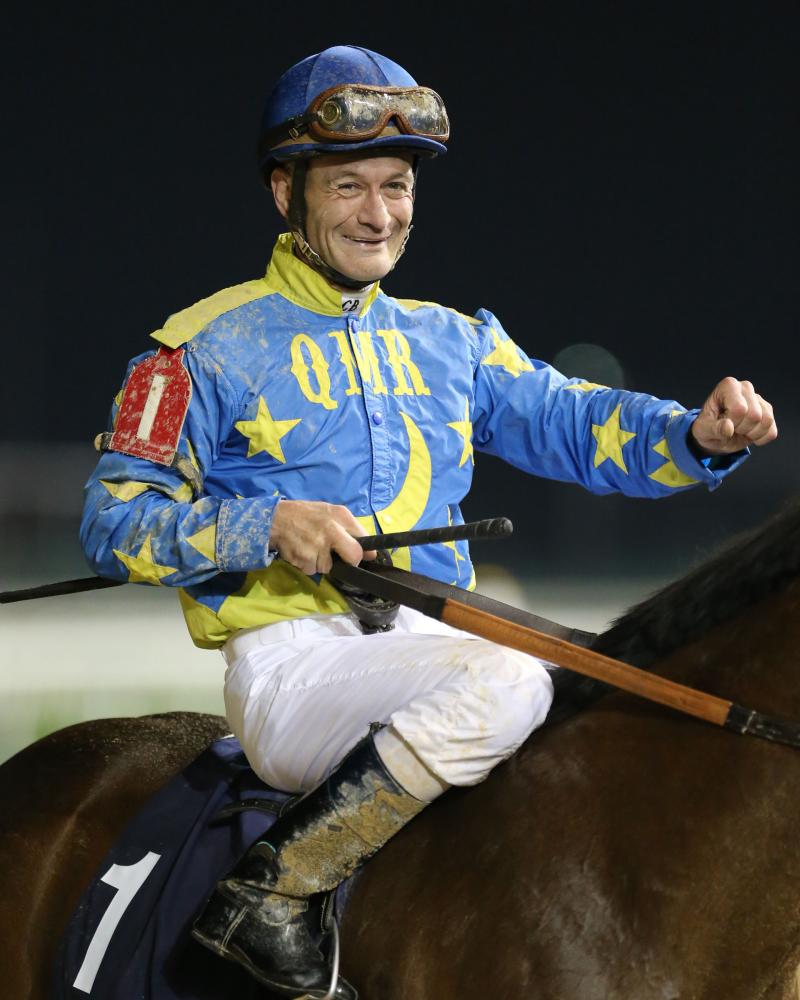 G. Watts Humphrey Jr.’s homebred Mines and Magic muscled her way through an opening at the top of the stretch to grab the lead with three-sixteenths of a mile to run and held off a late charge by Wonderment to win Saturday night’s 41st running of the $100,000 Dogwood Stakes Presented by GE Appliances (listed) at Churchill Downs by three-quarters of a length.

Mines and Magic, the 9-5 favorite in the field of eight 3-year-old fillies, relaxed nicely in fifth under jockey Robby Albarado about two lengths back of pacesetter Marquee Miss, who set fractions of :22.60 and :46.03 before relinquishing the lead to Luna Azteca, who poked her head in front leaving the turn for home. With the field closely bunched, Mines and Magic split rivals inside the three-sixteenths pole and opened a clear advantage, but Wonderment was closing ground steadily to just miss.

Mines and Magic ran seven furlongs over a fast track in 1:23.29 for trainer Vicki Oliver, who is Humphrey’s daughter.

Humphrey, the Chairman of the Board for Churchill Downs Incorporated, is the historic track’s sixth winningest owner with 139 victories since records were kept starting in 1976.

Mines and Magic, a daughter of 2003 Horse of the Year Mineshaft, has won three of her seven starts. In her prior start, Mines and Magic tried the $301,725 Del Mar Oaks (GI) on Aug. 20 and finished seventh, beaten 3 ¼ lengths, in her turf debut. Before that, she rallied for third in the $203,200 Indiana Oaks (GII) over 1 1/16 miles at Indiana Grand on July 16 after being bottled up behind the leaders until the top of the stretch. She shook loose late that day and closed to finish 3 ¼ lengths back of runner-up Emmzy, who was beaten three lengths by winner Family Tree.

“We’ve always though the world of the filly,” Oliver said. “We took a shot going out to California and running her in the (Del Mar Oaks and she had a lot of turf pedigree so we figured maybe try her and we didn’t get in the race at Kentucky Downs so this worked out very well for us.”

Bred in Kentucky, Mines and Magic is out of the Smart Strike mare Magical Theater.

The Dogwood was the feature race on an 11-race “Downs After Dark Presented Stella Artois and Woodford Reserve” nighttime racing program that attracted 16,768 fans.

Immediately following the Dogwood, Quarter Moon Ranch LLC’s reigning Arabian Horse of the Year Paddys Day won the $100,000 President of the United Arab Emirates Cup Sponsored by the Abu Dhabi Sports Council (Grade I) for purebred Arabian 3-years-old and up.

He paid $3.20, $2.80 and $2.10 as the odds-on 3-5 betting choice in the field of nine, and could be on his way to a repeat Horse of the Year title. This was his third Grade I win of the year after successful runs earlier this season in the $48,000 HH Sheikh Zayed Bin Sultan Al Nahyan Cup Stakes (GI) at Sam Houston in March and a five-length win in the $51,000 Delaware Park Arabian Classic Handicap (GI) two weeks ago on Sept. 10. He’s won five of eight starts this year.

This was the fourth time since 2011 a race for purebred Arabian horses – the world’s most ancient breed of equines – was staged at the world-famous Churchill Downs.

VICKI OLIVER, trainer of MINES AND MAGIC (winner): “We’ve always though the world of the filly. We took a shot going out to California and running her in the (Aug. 20) Del Mar Oaks and she had a lot of turf pedigree so we figured maybe try her and we didn’t get in the race at Kentucky Downs so this worked out very well for us.”

ROBBY ALBARADO, jockey of MINES AND MAGIC (winner): “I had a great trip. She broke extremely well which is always great in these kind of races. (Emmzy) got left to the outside and rushed up there and took a little bit out of that one, I guess. When she started losing ground, I found a spot and took it over.”

CALVIN BOREL, jockey of WONDERMENT (runner-up): “She ran a big race. He (trainer Kenny McPeek) just wanted me to get her to settle and get the trip that she did. We got lucky today, she settled for me and finished up. She ran a bang up good race. The winner was clearly the best, but 100 more yards and my filly gets there.”

SCOTT POWELL, trainer of PADDYS DAY (winner): “This doesn’t even compare to what it would be like to win the Derby. For us its small potatoes in comparison but that’s not what we’re in it for. We know what were about, we’re doing our best and the bottom line is someday maybe we can move up but we’re thrilled and thankful and we have great people. Our horse is great and we take care of our horses. We’re going to Abu Dhabi in November for their big race (Sheikh Zayed bin Sultan Al Nahyan Jewel on Nov. 6) and (jockey) Calvin (Borel) is coming. You know what? We’re going to do some damage. It’s a different game but we’re going to do some damage and we’re going to do our best. We’re pretty tough.”

CALVIN BOREL, jockey of PADDYS DAY (winner): “He’s like a little Thoroughbred. Every time I asked him, he put me in a spot. He’s very athletic and does everything like a Thoroughbred does. He ran a good race. He didn’t break as sharp as I thought he would. Once I found a hole I just picked my spot and he took off. I’m just happy to be back. I’ve won a few races this week so it’s back to rolling so everything’s going good.”

LYNN ASHBY, trainer of THESS IS AWESOME A (runner-up): “I was hoping that we could pull off what we did at Santa Anita last November. The track here is quick like Santa Anita and I was just hoping we could pull that off again but (Paddys Day) didn’t give us the shot this time. They had Borel on the inside and he is just unbelievable. You can see how good that horse was.” 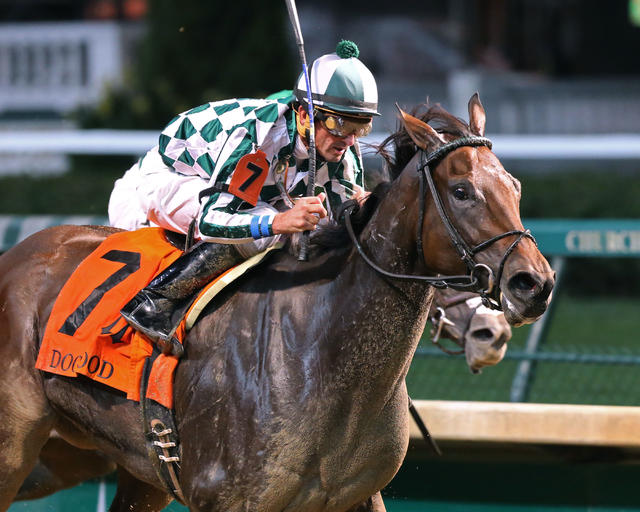