Carl Moore and Brad Grady’s 6-year-old mare Mom’s On Strike grabbed the lead with a sixteenth of a mile to run and held off late runs from Smart Shot and Limari to win Saturday’s 43rd running of the $125,000 Old Forester Mint Julep Stakes (GIII) at Churchill Downs by a neck.

Coco Channel set the early pace and led the field of eight fillies and mares through dawdling quarter-mile fractions of :24.79, :50.94 and 1:16.59. Vagabond Princess chased from her outside in second as Mom’s On Strike was tucked down on the inside in fourth. At the top of the stretch, Vagabond Princess confronted Coco Channel and took over as Mom’s On Strike swung out to commence her late run. Mom’s On Strike grabbed the lead at the sixteenth pole and turned back challenges from Smart Shot, who sliced her way into the mix between horses, and Limari, who rallied from last.

Mom’s On Strike, who made her first start in 217 days since finishing eighth in the $2 million Breeders’ Cup Filly & Mare Turf (GI) at Churchill Downs last November, banked the $75,175 first prize for her fourth career stakes victory. Previously, she won a trio of 2018 stakes: the $75,000 Marie G. Krantz Memorial and $75,000 Albert M. Stall Memorial at Fair Grounds and the $150,000 Bewitch (GIII) at Keeneland.

Mom’s On Strike is a daughter of First Dude out of the War Chant mare Mom’s Deputy and was bred in Florida by Courtney and Chad Meagher.

Racing at Churchill Downs resumes Sunday with a 10-race program that begins at 12:45 p.m. EDT.

Adam Beschizza, jockey of MOM’S ON STRIKE (winner): “It’s never really ideal to have an inside post with a deep closer. She was a bit more energetic today and a bit fresh off the layoff. Being so fresh it allowed her to get into the race earlier, which helped her chances.”

Joe Sharp, trainer of MOM’S ON STRIKE (winner): “All the credit goes to owners Carl Moore and Brad Grady. They allowed us to be patient with this mare and give her the time off that she needed. After the layoff she came back as a stronger mare and is going to set her up for a really fun campaign.”

Edgar Morales, jockey of SMART SHOT (runner-up): “She ran a huge race. I tried to find some room late and she was pretty gutsy today. I’m very proud of her effort.”

Florent Geroux, jockey of LIMARI (third as the 4-5 favorite): “She ran a giant race but missed the break. Being that far back isn’t really her best game.” 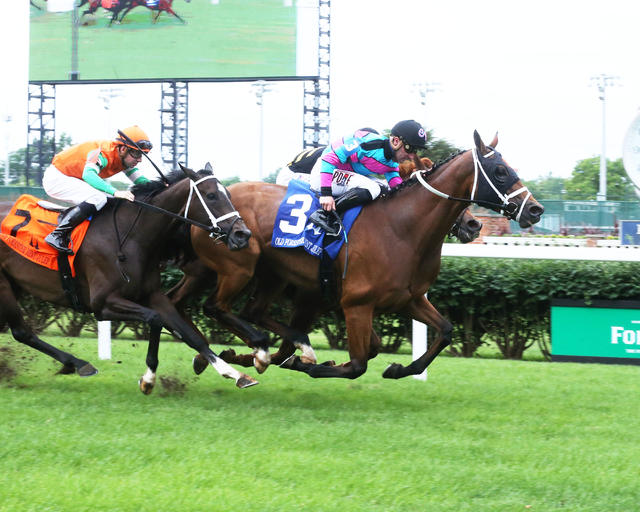