Michael Dubb, Monomoy Stables, The Elkstone Group and Bethlehem Stables’ Longines Kentucky Oaks (GI) winner Monomoy Girl breezed a swift five furlongs in 1:00.20 with regular rider Florent Geroux aboard on the outside of stablemate Dazzling Gem (five furlongs, 1:01.40). She rattled off eighth-mile splits of :12.80, :24.60, :36.40 and :48.60 before finishing her breeze by galloping out six furlongs in 1:13.40, according to Churchill Downs clocker John Nichols.

“It was a fantastic breeze,” trainer Brad Cox said. “We got a little bit of rain overnight so the track was a little slow but she worked fantastic over it. She started a few lengths behind the work mate and finished up strong in front of him and galloped out well. We’ll probably come back next week to work a half-mile prior to the Distaff.”

Monomoy Girl, one of the likely favorites for the Distaff, was most recently placed second in a controversial running of the $1 million Cotillion (GI) at Parx after the stewards deemed she caused interference with Midnight Bisou in the stretch.

Following the track’s second renovation break at 9 a.m. (all times Eastern), trainer Dale Romans breezed the speedy Promises Fulfilled a half-mile in :48 with opening splits of :11.60 and :35.60 before galloping out five furlongs in 1:00.60, according to Nichols.

“It was a great work after his last start (in the Phoenix Stakes at Keeneland),” Romans said. “We’re going to pre-enter both the Sprint and Dirt Mile but I’d lean to run him in the Sprint. We still have a shot to be Sprint Champion with this horse and, even if we won the Dirt Mile, we may not be champion.”

Owner Bob Baron flew to Louisville from his home in upstate New York with his wife of 44 years, Debbie, to watch the breeze alongside Romans.

Promises Fulfilled was not originally nominated to the Breeders’ Cup but Baron stated he will pay a supplemental fee to be eligible for the race.

Also on the Churchill Downs work tab Saturday was Ironhorse Racing Stable’s Woodford Stakes (GIII) winner Bucchero, who worked a half-mile in :48.60 under jockey Fernando De La Cruz through splits of :12.20, :24.40 and :36.60 before galloping out five furlongs in 1:02, according to Nichols.

“I was very pleased with how he worked this morning,” trainer Tim Glyshaw said. “It’ll be exciting running him out of his own backyard on Breeders’ Cup Day. We may gallop him over the turf once or twice when it opens Breeders’ Cup week but he trains well over the dirt so it doesn’t really have too much of an impact one way or another.”

Glyshaw, a former school teacher from Indiana, will be celebrating his 50th birthday on Breeders’ Cup Saturday.

Bucchero, the richest Indiana-bred in history with 11 victories and $937,936 in purse earnings, will be retired and stand stud at Pleasant Acres Stallions in Florida in 2019.

Earlier in the morning, Cox breezed Thoroughbred Club of America (GII) winner Golden Mischief a half-mile in :50.60 and Woodford (GIII) runner-up Will Call four furlongs in :49.80.

“It was just easy works for them since they just ran,” Cox said. “Golden Mischief is still targeting the Filly and Mare Sprint and Will Call could be pretty tough in the Turf Sprint (GI). I didn’t want to do too much with them this morning so they went easy but looked good doing so.”

For the latest Breeders’ Cup arrivals and work out news from at Churchill Downs, follow @DerbyMedia on Twitter.

“We’ll breeze him early Sunday to try and get the best track condition,” said Thomas, who arrived at Churchill Downs Thursday. “Javier also has to ride that afternoon at Belmont so he’ll have to make a flight right after the breeze. We’ll probably go during the Breeders’ Cup training window (7:30-7:45 a.m. beginning Saturday, Oct. 27) for his work next week.”

BREEDERS’ CUP PRE-ENTRY ANNOUNCEMENT ON WEDNESDAY – Pre-entered fields for the 2018 Breeders’ Cup World Championships will be announced via a live stream on the Breeders’ Cup website, Official Mobile App and Facebook page on Wednesday at 11:30 a.m. ET.

Breeders’ Cup Pre-Entry is the first stage of a two-stage entry payment process for all owners intending to start a horse in a Breeders’ Cup World Championships race. The first payment is due by 12 p.m. ET on Monday. The second payment is due on Monday, Oct. 29 when entries are taken for all 14 Breeders’ Cup races, and post positions will be drawn later that day. 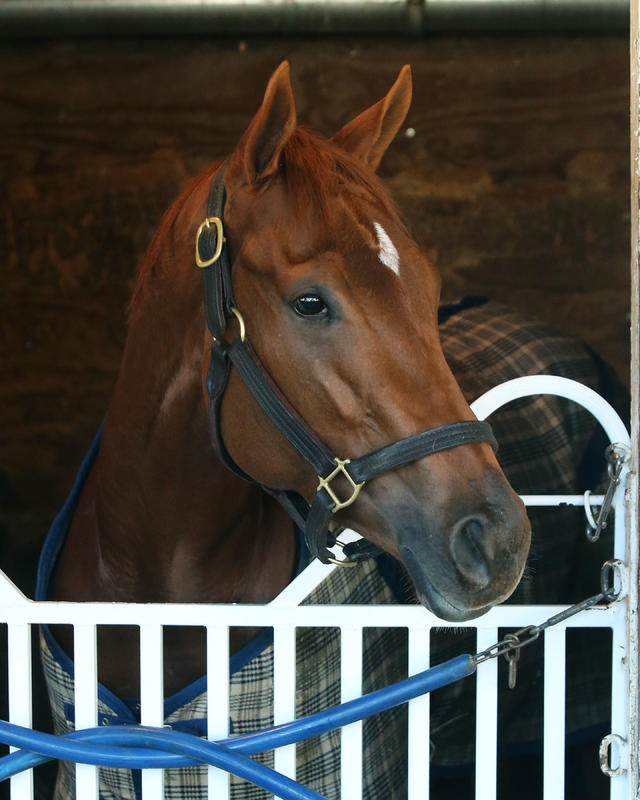