Mr Dumas collared pacesetter Ritzy A.P. with a furlong to run and drew away in the final stages to win Thursday’s $84,595 feature race at Churchill Downs by a half-length. Casa Creed and 6-5 favorite Front Run the Fed, finished third and fourth, respectively, in the field of 10 older horses.

Trained by Mike Maker and ridden by Martin Garcia, 4-year-old Mr Dumas raced in the clear just behind pacesetter Ritzy A.P., who dictated a leisurely early pace of :24.69, :49.19 and 1:13.46 with Casa Creed and Front Run the Fed just a couple of lengths behind. Mr Dumas, the winner of the $175,000 Commonwealth Turf (GIII) at Churchill Downs last November, improved to a perfect 3-for-3 over the Matt Winn Turf Course when he ran past the leader in deep stretch and covered one mile on firm turf in 1:37.09.

“It looked like he wanted to run around there again,” Maker said. “He certainly loves this turf course.”

Added Garcia: “He was pretty keen but we got into a good spot and he did it easily.”

Racing at Churchill Downs will continue Friday at 1 p.m. (all times Eastern) with a 10-race program highlighted by a third-level allowance worth $85,000. Saratoga allowance winner Malakeh (GB) is the 5-2 morning line favorite in the overflow field of 10 fillies and mares at one mile on turf.

Additionally, a dozen 2-year-olds will sprint 4 ½ furlongs in the first race of the day, led by early 3-1 favorite Spicy Marg, a Wesley Ward-trained filly by Into Mischief who will tackle males in her career bow. 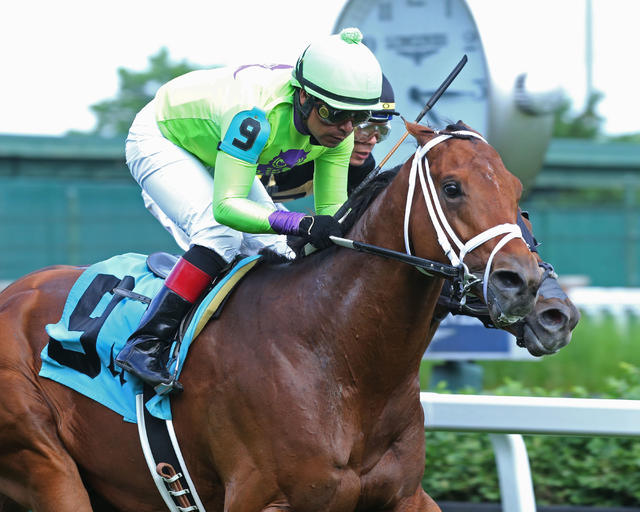