May 4, 2019
| Churchill Downs Communications
LOUISVILLE, KY (Saturday, May 4, 2019) – Allied Racing Stable’s Mr. Money split horses on the far turn to surge to the front and then drew off to a 5 ¼-length victory in the 95th running of the $400,000 Pat Day Mile (GIII) Presented by LG&E and KU for 3-year-olds.
Trained by Bret Calhoun and ridden by Gabriel Saez, Mr. Money ran the mile on the fast main track in 1:35.21.
Mr Money Bags, Dunph and Manny Wah were in a three-way tussle for the lead through fractions of :22.21 and :45.42 with Saez lurking just behind the trio. Going into the far turn, Saez moved at the leaders, split Dunph and Manny Wah and emerged with the lead at the top of the stretch and never was threatened in the run to the wire.
The victory was worth $228,160 and increased Mr. Money’s bankroll to $402,560 with a record of 7-2-2-0.
Mr. Money is a Kentucky-bred son of Goldencents out of the Tiznow mare Plenty O’Toole.
Mr. Money returned $17, $8 and $5.40. Hog Creek Hustle, ridden by Corey Lanerie, returned $14.20 and $8.60 and finished 2 ½ lengths in front of Dream Maker who rallied for third under Julien Leparoux to pay $9.60 to show.
It was another 1 ¾ lengths back to Captain Von Trapp who was followed in order by Everfast, Frolic More, Dunph, favored Instagrand, Last Judgment, Durkin’s Call, Tobacco Road, Manny Wah and Mr Money Bags.
PAT DAY MILE QUOTES
GABRIEL SAEZ (rider of Mr. Money, winner) – “It was a good race for him. He was finally able to get it back together again. I couldn’t have a better trip than that. Saving ground for later, I split horses turning for home and, man, the minute he was free, he explodes. He finished really well, and handled the track, and got the job done. He’s been doing fabulous, day by day, week by week. He’s been coming along, and I was just really happy with him today, and thought he would run a big race, and he did, he did.”
BRET CALHOUN (trainer of Mr. Money, winner) – “He was a little bit more forward than By My Standards over the winter. We thought we had a great plan for him during the winter. We freshened him after the Breeders’ Cup and he was doing really good coming into the Lecomte at Fair Grounds. He got a temperature the night before and missed that race. We thought we got him back on track quickly and it seemed like he was going into the next race really good. Two days before that race he trained phenomenally well. The day before he wasn’t quite the same and he got cast in his stall the night before. Nothing major, just a scratch on his hip and it didn’t appear like there was anything wrong. But something wasn’t quite right that day.
“In the Louisiana Derby, he ran a good race, didn’t have a perfect trip. But he got up here and he’s trained phenomenally well. We thought the Pat Day Mile would suit him. I don’t know how far he wants to go but based on the way he ran today, I don’t think going a l 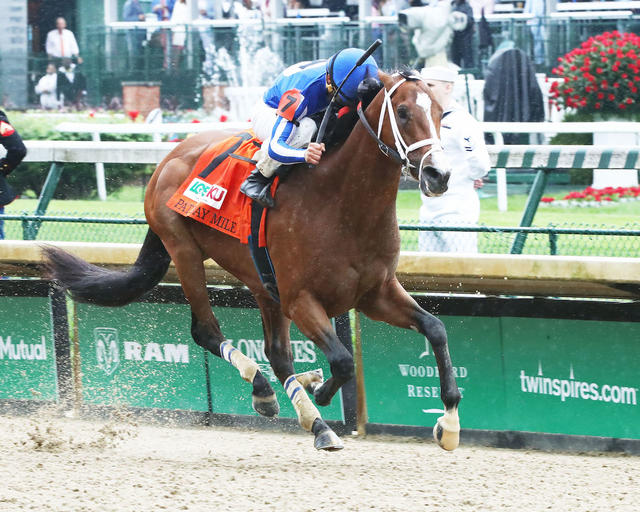