Allied Racing Stable LLC and Spendthrift Farm LLC’s Mr. Money rated just off a hot early pace, slipped through an opening along the rail leaving the turn and spurted clear inside the eighth pole to hold off late runs by Bourbon Calling and Thirstforlife and win Saturday’s 28th running of the $100,000 Ack Ack (Grade III) at Churchill Downs by 1 ¼ lengths.

Ridden by Gabriel Saez and trained by Bret Calhoun, Mr. Money, the 4-year-old son of Goldencents, clocked the one-turn mile in 1:34.85 to collect his fifth career Grade III stakes win.

Warrior’s Charge, the heavy 6-5 favorite, broke fastest of all from the inside and led the field of 12 older horses through record Ack Ack early fractions – an opening quarter-mile in :22.61 and the half in :44.85 – with American Anthem pressing from the outside and Mr. Money tracking along the inside.

Pioneer Spirit, who was fourth early on, made an early move around the turn to pressure Warrior’s Charge. Off the turn in a swift 1:09.11, Pioneer Spirit poked his head in front of Warrior’s Charge, who drifted out and opened a hole for Mr. Money to slip through along the inside. Mr. Money grabbed the lead at the eighth pole and grinded his way to victory as the fast pace benefitted closers Bourbon Calling and Thirstforlife, who were separated by a meagre nose for the placing.

“We sat a perfect trip,” Saez said. “This horse hasn’t had things go his way this year and showed us the real Mr. Money today.”

Previously, Mr. Money hadn’t hit the board in four starts this year, including a last-place finish in the $600,000 Charles Town Classic (GII) on Aug. 28.

It was his fourth win in six starts at Churchill Downs. “He loves this track and got to run out of his own stall,” Calhoun said.

“Fingers crossed that will take us to the Breeders’ Cup,” said co-owner Chester Thomas of Allied Racing Stable LLC. “We are so thrilled for this horse, Bret, his entire team and Gabe.”

Mr. Money, out of the Tiznow mare Plenty O’Toole, was bred in Kentucky by Spruce Lane Farm.

Gabriel Saez (winning rider, Mr. Money) – “We sat a perfect trip. This horse hasn’t had things go his way this year and showed us the real Mr. Money today.”

Bret Calhoun (winning trainer, Mr. Money) – “Gabe worked out a perfect trip on him. I thought his last few tries weren’t a fair assessment of who this horse is. He showed us who he was today. He loves this track and got to run out of his own stall.”

Chester Thomas (co-winning owner, Mr. Money) – “Fingers crossed that will take us to the Breeders’ Cup. We are so thrilled for this horse, Bret, his entire team and Gabe.”

Florent Geroux (jockey of 6-5 beaten favorite Warrior’s Charge, eighth) – “We broke really sharp and there was a lot of pressure to my outside and he just got tired late.” 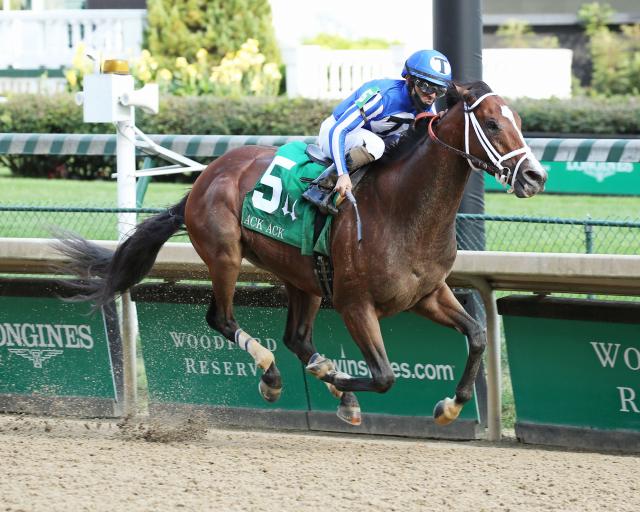