The Fleur de Lis is a Breeders’ Cup “Win and You’re In” race for the $4 million Longines Distaff (GI) on Nov. 6 at Del Mar. The winner will receive an all entry fees paid berth to the season ending championship event.

Trained by Fausto Gutierrez, Letruska scored a front-running victory in the $500,000 Ogden Phipps (GI) earlier this month on the Belmont Stakes undercard. The 5-year-old Super Saver mare has 14 wins from 18 lifetime starts including a victory in the $1 million Apple Blossom (GI) in April where she re-rallied against multiple champion Monomoy Girl.

“She’s in a good condition to run,” Gutierrez said. “This is a very important race. We’re going step by step for now and this is next race we had in mind. I know it’s just 21 days from the (Ogden Phipps). When a horse wants to run and they’re ready to run, we have to let them run. She’s at Keeneland training and we’re looking forward to getting her to Churchill.”

Gutierrez, who was a top trainer in his home country of Mexico, has been primarily training in the U.S. in 2021. Letruska’s only blemish in her 5-year-old campaign was a runner-up effort to Shedaresthedevil in the $350,000 Azeri (GII).

Jose Ortiz has the mount in the Fleur de Lis from post position No. 6.

Among Letruska’s challengers in the Fleur de Lis is Walking L Thoroughbreds and Three Chimneys Farm’s Grade II winner Envoutante. Trained by Kenny McPeek, Envoutante cruised to a 4 ¼-length victory in last month’s $150,000 Shawnee Stakes, the local prep for the Fleur de Lis on May 29.

Envoutante, a 4-year-old filly by Uncle Mo, finished 2 ¼ lengths behind Letruska in the Azeri. Arguably the biggest win in Envoutante’s career was a six-length win in last year’s $200,000 Falls City (GII) at Churchill Downs.

Her regular pilot Brian Hernandez Jr. will be in the saddle from post 4.

Another top filly that entered the Fleur de Lis is Robert and Lawana Low’s $150,000 Allaire DuPont Distaff Match Series (GIII) winner Spice Is Nice. The Curlin filly is a four-time winner for trainer Todd Pletcher. The regally-bred Spice Is Nice is out of Pletcher’s former Grade I-winning mare Dame Dorothy. Hall of Fame jockey John Velazquez has the mount from post 5. 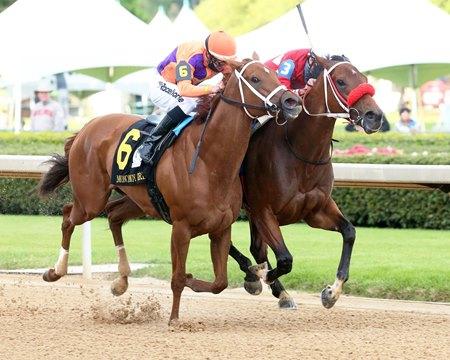