Finite, a 3-year-old filly by Munnings, was the narrow runner-up finisher behind Venetian Harbor in last month’s $200,000 Raven Run (GII) at Keeneland. Previously, the Steve Asmussen-trained Finite was on the Kentucky Oaks (GI) trail after victories in the $120,000 Rags to Riches, $300,000 Golden Rod (GII), $150,000 Silverbulletday and $300,000 Rachel Alexandra (GII). Following her fourth-place effort in the $400,000 Fair Grounds Oaks (GII), Finite underwent minor ankle surgery but returned to Asmussen’s stable a few months later.

Jockey Ricardo Santana Jr. has the call on Finite who will break from post position No. 2.

Among Finite’s rivals entered in the Chilukki is Speedway Stable’s Raven Run third-place finisher Grand Cru Classe. Trained by Bill Mott, Grand Cru Classe finished a half-length behind Finite in the seven-furlong Raven Run at odds of 20-1. The daughter of Bernardini has recorded three victories in just four starts including a narrow win in the $100,000 Weber City Miss Stakes at Laurel.

Tyler Gaffalione has the call on Grand Crue Classe and will break from post 3.

Also entered in the Chilukki is Fox Hill Farms’ stakes winner Whoa Nellie. Trained by Larry Jones, Whoa Nellie is scheduled make her first start in more than nine months following a runner-up finish in the $200,000 Bayakoa (GIII). The speedy daughter of Orb was in top form over the winter recording an impressive 2 ¾-length allowance score in December at Turfway and a dominating 4 ½-length victory in the $100,000 Pippin Stakes at Oaklawn in January.

Joe Rocco Jr. has the call on Whoa Nellie who drew post 4.

The Chilukki is named after the three-time Churchill Downs stakes-winning filly. Trained by Bob Baffert, Chilukki set two track records beneath the Twin Spires – her 1999 4 ¼ furlong debut performance in :51 and a scorching one-mile clocking in 1:33.57, breaking the 31-year track record in this event in 2000.

THIS WEEK AT CHURCHILL DOWNS – Racing beneath the Twin Spires continued for a five-day race week on Wednesday with a daily first post of 1 p.m.

Sunday’s entries will be drawn Thursday.

MEET LEADERS – Jockeys Florent Geroux and Ricardo Santana Jr. entered Wednesday’s card tied for the top of the standings with 19 wins. Tyler Gaffalione held third with 17 wins. … Trainers Steve Asmussen and Mike Maker shared the lead with 11 wins. Brad Cox was in third with seven wins. … Ken and Sarah Ramsey’s four wins moved them to the top of the owner’s standings. They held a one-win cushion over Calumet Farm, Jim and Susan Hill and Three Diamonds Farm.

CHURCHILL DOWNS TO PARTNER WITH NYRA FOR CROSS COUNTRY PICK 5 ON FRIDAY – Churchill Downs has once again partnered with the New York Racing Association for a Cross Country Pick 5 that included three races from Churchill and two from Aqueduct.

The Race order and approximate post times (all times eastern):

The 50-cent minimum wager has a 15% takeout and can be placed at simulcast centers and ADWs including TwinSpires.com

DOWN THE STRETCH – There was a $136,661 carryover in the 20-cent Single 6 Jackpot for racing on Wednesday. First post was 1 p.m. and the Single 6 spanned Races 4-9. … Pool 1 of the Kentucky Derby Future Wager and Sire Future Wager will run Thursday, Nov. 26 to Sunday, Nov. 29. More information can be found on www.kentuckyderby.com/futurewager. … The season finale of “Inside Churchill Downs” will air Friday at 6 p.m. on ESPN 680/105.7. The show is streamed live on www.espnlouisville.com. … For more information about the Churchill Downs Fall Meet, visit www.churchilldowns.com. 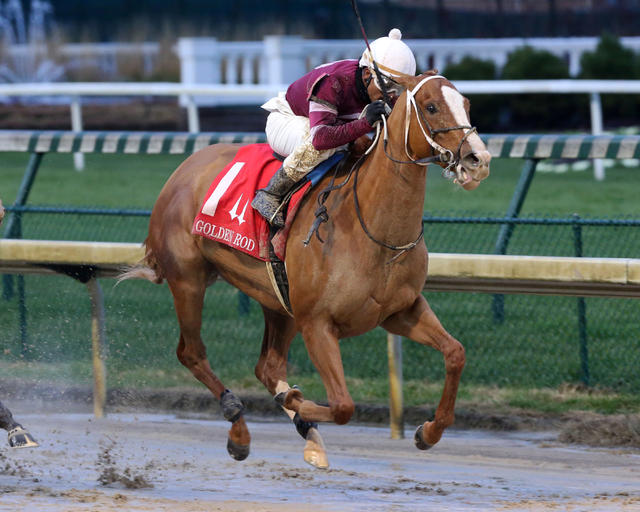