Lloyd Madison Farm’s top filly and mare sprinter Sconsin is poised to return for her 5-year-old campaign and defend her championship in the $200,000 Winning Colors (Grade III) on Memorial Day at Churchill Downs.

Sconsin, trained by Greg Foley, has been away from the races since winning the $300,000 Open Mind (Listed) in September. The homebred daughter of Include returned to Foley’s barn this winter at Fair Grounds and has been regularly training at Churchill Downs for her seasonal bow.

“We had success in this race last year and thought it would be a good spot for her return,” Foley said. “We gave her the winter off and she just wasn’t quite ready to return to Grade I competition last month. So, we decide to target this race as her return. She’s been doing great back at Churchill. She was one of the first horses we sent home from Fair Grounds because we know how much she likes it in Kentucky. We’re excited to get her campaign kicked off at home.”

Sconsin has been nothing short of brilliant beneath the Twin Spires. Four of her five lifetime victories were at Churchill Downs, including a Grade II win in the 2020 Eight Belles.

Foley has worked Sconsin about every 10 days since early April, including a swift five-eighths move in :59.40 on May 12.

In last year’s Winning Colors, Sconsin scorched six furlongs in 1:08.80, only .73 seconds off the stakes record set by Dubai Majesty in 2010.

The Winning Colors will return to being run on Memorial Day (Monday, May 30) for the first time since 2015. The six-furlong dash is named in honor of the brilliant Winning Colors, who became the third filly to win the Kentucky Derby in 1988. Winning Colors is one of five Derby victors, and only the second filly winner, to have a Churchill Downs stakes race named in her honor. She joins Alysheba, Aristides, Regret, the first filly winner, and Street Sense to have Churchill events named in their honor.

Entries for the Winning Colors will be drawn Thursday.

Set Piece arrived in North America in early 2020 and has won four races at Churchill Downs, including last year’s Wise Dan by a half-length over Somelikeithotbrown.

The gutsy son of Dansil (GB) has been ridden by Florent Geroux in 10 of 14 starts in the U.S.

“This horse is a closer so sometimes things don’t go his way,” Geroux said after his victory in Saturday’s Dinner Party. “It happens with a closer on the turf – you hope there is a good pace. In my opinion, he can win a Grade I. I’m not saying he’s going to win the Breeders’ Cup Mile but I can see him winning a race like the Woodbine Mile or Fourstardave.”

Nominations to the Wise Dan will close Saturday, June 18.

ARNOLD ON FIRE – Trainer Rusty Arnold II continued his hot streak Saturday at Churchill Downs when Cellist scored a narrow victory in the $150,000 Louisville Stakes (Grade III), giving the barn their fifth win of the week.

For his five victories this week, Arnold’s winners have earned a combined $331,695.

CHURCHILL DOWNS RACING TO AIR ON FOX SPORTS 2 – Churchill Downs racing will air on Fox Sports family of networks as part of “America’s Day at the Races” produced by the New York Racing Association. Here is the TV schedule for the next six racing days:

DOWN THE STRETCH – The Derby City 6, that spanned races 4-9 Sunday, had a carryover of $28,997. First post was 12:45 p.m. … With continued overnight rain, racing was taken off the turf Sunday. The track was rated “sloppy” for training. … Turf racing will be conducted in Lane 4, 36 ft. from the inside rail, next week. With the rail setting in the furthest lane on the 85 ft. wide Matt Winn Turf Course, the field sizes will be limited to 10 starters. … Entries for Saturday’s eighth running of the $160,000 Keertana Overnight Stakes for fillies and mares at 1 ½ miles on turf will be taken Wednesday. … Churchill Downs will run a five-day race week next week starting Thursday for Twilight Thursday. First post Thursday is 5 p.m. with $2 domestic canned beer and Blue Moon, live music from Dusty Bo and local food trucks Sweet N Savory, Crave a Go Go, Copper Kitchen, 502 Kitchen and Flavorville. Monday is a special Memorial Day program and also Military Appreciation Day. Active and retired military members, with a valid I.D., will receive free general admission or a discounted ticket ($29) to Millionaires Row. First post Friday-Monday is 12:45 p.m. … For more information about the Spring Meet, visit www.churchilldowns.com. 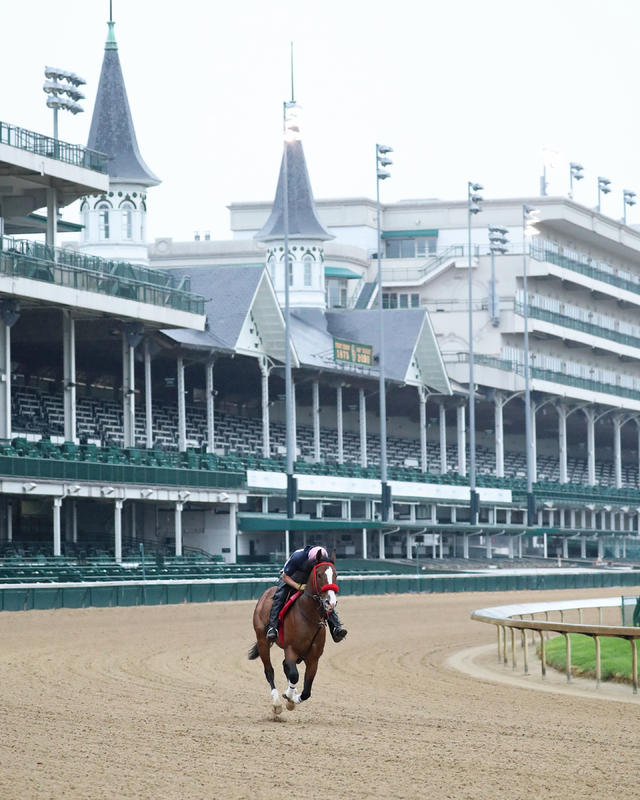