Nay Lady Nay (IRE) sliced her way between rivals Dalika (GER) and The Mackem Bullet (IRE) in deep stretch to win Saturday’s 29th running of the $300,000 Mrs. Revere (Grade II) at Churchill Downs by a half-length.

Hard Legacy, winner of the Regret (GIII) in June, carved out fractions of :24.54, :50.25 and 1:16.42 as Nay Lady Nay (IRE) relaxed in mid-pack along the inside hedge down the backstretch. Off the far turn, The Mackem Bullet (IRE) challenged Hard Legacy for the lead with Dalika (GER) soon to take over from the outside with a furlong to run. But Nay Lady Lady (IRE), who was finding her best stride after swinging out to the four-path, split between Dalika (GER) and The Mackem Bullet (IRE) inside the sixteenth pole and edged clear in the final stages.

Nay Lady Nay (IRE) is a dark bay or brown daughter of No Nay Never out of the English Channel mare Lady Ederle who was bred in Ireland by Stephen Sullivan.

The Mrs. Revere is named in honor of Mrs. Revere, an accomplished Churchill Downs fan favorite in the mid-1980s. Mrs. Revere won 12 races in 28 starts, finished second seven times and earned $429,545 for Hall of Fame trainer Bill Mott. Her six wins in a dozen starts at Churchill Downs included stakes triumphs in the Regret, Dogwood and Edgewood in 1984 and the Kentucky Cardinal in 1985. She was owned by Drs. David Richardson and Hiram Polk, who have provided the winner’s trophy for the Mrs. Revere in each year of its existence. 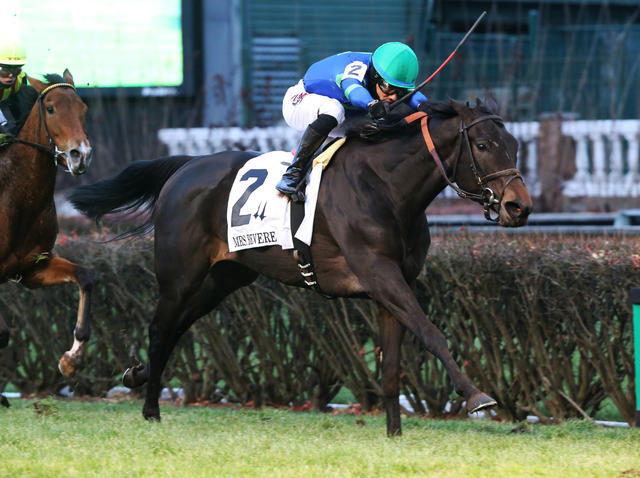