Horse racing on the Kentucky circuit shifts to Churchill Downs on Friday (Sept. 14) with a 10-race program at 12:45 p.m. (all times Eastern) as the famed Louisville racetrack opens its sixth September Meet for an action-packed 11-date run through Sunday, Sept. 30.

This year’s three-week, boutique race meeting, presented by Commonwealth Technology, will feature record purse levels. Horsemen can compete for $5.275 million in prize money offered in Director of Racing Ben Huffman’s 109-race September Meet condition book, which averages to $479,545 per day. Last year, an unprecedented $4.692 million was paid to horsemen for a daily average of $427,000, which was up 12% from the prior year.

Inaugurated in 2013 by request from Kentucky horsemen, the three-week September Meet provides area horse owners, trainers and jockeys a viable racing option to compete for ample prize money mainly on dirt during an important time on the racing calendar in advance of the popular Keeneland and Churchill Downs fall meets.

A total of 97 horses and four also-eligible entries were drawn Tuesday for Friday’s opener for a lofty average of 9.7 horses per race. The average field size during last year’s meeting was a September record 8.9 horses.

“Stanley Hough has been breaking the young horses for Sagamore Farm in Ocala, Fla. the past couple years,” Huffman said. “I just remember 20 years ago when he was training stakes winners all over the east coast and Florida. He’s a really good trainer and he’s going to train privately for the Sagamore Farm of Kevin Plank. He called me the other day and he will be here for all of September and Fall. He even mentioned he may be looking to buy a home in Louisville.

“Our trainer colony is really strong here. We try and bring in new faces every year but it’s going to be fun the next few years when we have guys like Stan Hough coming back and perhaps some of these other guys that have been in New York and Florida for a long time that are wanting to try Kentucky.”

With the Breeders’ Cup World Championships set to return to Churchill Downs during the 21-day Fall Meet on Nov. 2-3, several new trainers will have horses stabled at the Louisville track for the first time in many years, including Keith Desormeaux, two-time Kentucky Derby winner Nick Zito and newcomer Chad Summers.

“A big part of the Breeders’ Cup being here at Churchill Downs is that we are going to have a lot of people that are trying to get a run over this track,” Huffman said. “When Breeders’ Cup is here, that always helps your stakes races.

“Nominations haven’t even closed for the (Grade III, $200,000) Lukas Classic (for 3-year-olds and up at 1 1/8 miles on Sept. 29) but I can already tell you (three-time Grade I-winning sprinter and Whitney runner-up) Mind Your Biscuits’ next start will be in the Lukas Classic. Also, Toast of New York is coming from Europe to get a trip over the track prior to the Breeders’ Cup. Things like that helps our other stakes races.

“Keith Desormeaux is going to send five or six horses. He says he’s going to stay even after the Breeders’ Cup. Chad Summers is coming with one or two horses. He, too, has mentioned running in the Breeders’ Cup and sticking around for the Clark Handicap (GI). We were able to squeeze Nick Zito in for the September and Fall Meet with a small division of 12. He normally doesn’t race with us September or the fall. Things like that are indication that things may be changing with guys like that stabling here this year.”

A major focus for many horsemen during the second of the year is the development of 2-year-olds. Friday’s eighth race, a $56,000 maiden special weight at one mile, attached 13 two-year-old fillies, and it’s the first of 16 maiden, allowance or stakes races for juveniles during the September Meet.

“Being in the horse capital of the world, we are inundated with 2-year-olds,” Huffman said. “During this time of the year, from September to the end of November, I’m very happy to have all of these 2-year-olds. They’re good betting races and full fields. We try to split as many of them as we can and it’s because we have an abundance of 2-year-olds. They’ve been training all spring and summer and the majority of them are ready to run.”

The September Meet’s nine-race stakes schedule cumulatively worth $1.125 million kicks off Saturday with a stakes quartet, including two important 1 1/16-mile fixtures for juveniles that could produce starters in next spring’s Kentucky Derby Presented by Woodford Reserve (Grade I) and the Longines Kentucky Oaks (GI). The $150,000 Iroquois (GIII) kicks off the “Road to the Kentucky Derby” series (Top 4 Points: 10-4-2-1), while the $200,000 Pocahontas (GII) starts the “Road to the Kentucky Oaks” (Top 4 Points: 10-4-2-1). Also, both races are Breeders’ Cup “Win and You’re In” Challenge events, which means the winners will receive automatic berths in the starting gate for their respective Breeders’ Cup races on Nov. 2 at Churchill Downs with full entry fees and travel expenses paid.

Entries for Saturday’s 11-race card will be taken Wednesday morning.

The $200,000 Lukas Classic (Grade III), along with the $100,000 Ack Ack for milers (GIII), $100,000 Jefferson Cup (Listed) for 3-year-olds at 1 1/8 miles on turf and $100,000 President of the UAE Cup (GI) for Arabians 4-years-old and up at 1 1/16 miles, will be the featured events on Saturday, Sept. 29 – the lone Downs After Dark Presented by Budweiser night racing event of the September Meet and last one of the year. The event theme that evening will be Bourbon & Beats and guests are encouraged to wear shades of purple and stay on trend with autumn fashion as they celebrate a pairing of Kentucky sounds and spirits.

Opening weekend weather in Louisville will be ideal, according to the National Weather Service, with a forecast of sunny skies and temperatures in the mid-to-upper 80s.

Family Adventure Day Presented by Kroger is scheduled for Sunday, Sept. 23. Families are encouraged to bring the kids to Churchill Downs for a day of racing and family activities including pony rides, inflatables, petting zoo, stick horse races on the turf course, face painting and more. The theme is “Be Creative!” and special happenings include science activities from The Kentucky Science Center; arts and crafts with Side by Side Studio; a mobile recording studio with AMPED: The Academy of Music Production, Education and Development; practice printmaking basics with KMAC; and interaction with the Kentucky Department of Agriculture.

Tickets for adults and children age 3 and up are just $8 when purchased online in advance at ChurchillDowns.com, and include unlimited access to all kid-friendly activities through 5 p.m. Churchill Downs is also offering a Family Four Pack that includes four Family Adventure Day tickets, four family meals in the Family Adventure Day area and two racing programs for only $44 (a $59 package includes reserved box seats).

The leading owners during last September were Ken and Sarah Ramsey of Nicholasville, Ky., who won five races. The couple was victorious in nine races during the Spring Meet to collect their 31st crown as Churchill Downs’ top owners. Overall, they’ve won 487 races beneath the Twin Spires to easily be the track’s all-time leading owners.

The lone Senior Day of the September Meet at Churchill Downs is scheduled for Friday, Sept. 28. Guests 60 and up can enjoy lunch and a day at the races in Millionaires Row for only $24.

On Sundays, Churchill Downs is offering a special “Stakes and Eggs” brunch special in the Stakes Room. The $45 package for adults and $22 package for children includes a seat in the Stakes Room on the fourth floor of the Clubhouse and all-you-can-eat access to the brunch menu that includes an omelet station, scrambled eggs, biscuits and country gravy, French toast, hot brown, carved country ham, crispy bacon, sausage patties, hash brown potatoes with peppers and onions, fresh fruit, garden vegetables, breakfast breads and a chef’s dessert display. 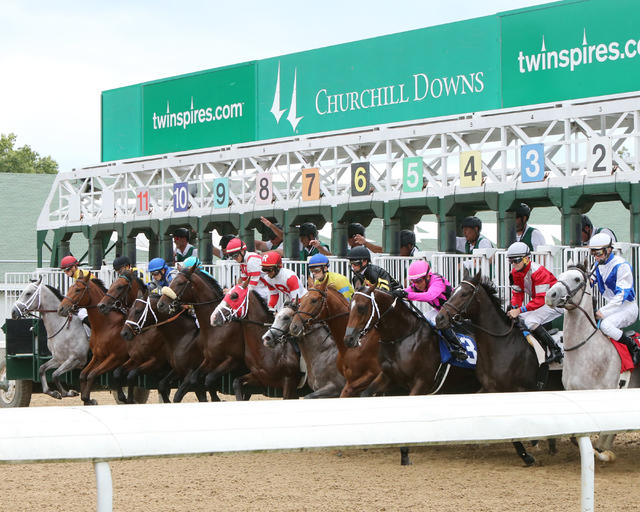