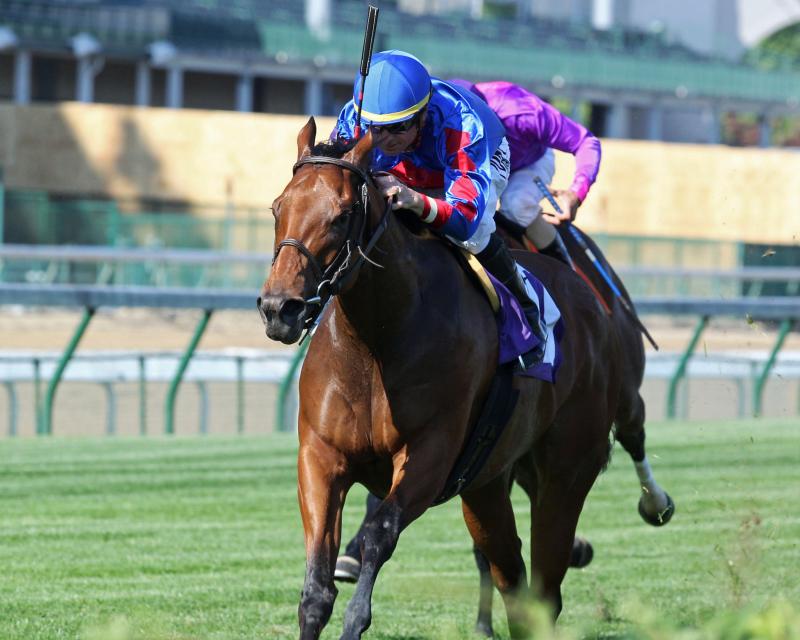 Robert J. Lothenbach’s homebred Nobody’s Fault surged late inside the final sixteenth of a mile to collar Triple Chelsea by one length and win Saturday’s seventh running of the $64,600 Unbridled Sidney for fillies and mares at Churchill Downs.

Trained by Neil Pessin and piloted by leading rider Corey Lanerie, Nobody’s Fault covered the five furlongs on a firm Matt Winn Turf Course in :56.65 to give the 4-year-old filly a coveted stakes triumph.

Melaleuca led the field of 10 fillies and mares through the first quarter mile in :22.11 and the half in :45 with Nobody’s Fault tracking in fifth and in the clear down the backstretch. As Lanerie fanned Nobody’s Fault five-wide on the turn, Triple Chelsea took over and inched clear in the stretch only to be run down in the final stages by the eventual winner, who displayed a powerful late kick.

“I had a perfect trip,” Lanerie said. “We broke well and I got her to the rail right behind the speed. Once we turned for home she started to run on strong. It took me a long time to get the lead – at first I didn't think we would get there – but my horse kept responding.”

Nobody’s Fault is a Kentucky-bred daughter of Blame out of the Valid Appeal mare Appealing Storm.

It was another head back to 2-1 favorite Miss Gossip (Ire) in fourth with Boom Bam Bing, Her Love for Pappy, Melaleuca, Frosty Friday, Super Saks and Sweet Angel Roan completing the order of finish. Clairenation was scratched by trainer Greg Foley, who anticipates his 5-year-old mare to return against allowance company in the next couple of weeks.

The stakes event is named for Unbridled Sidney, who won four of her seven starts at five furlongs over Churchill Downs’ Matt Winn Turf Course in 2005-07 for owners Douglas and Norrine Devenport and trainer Ronny Werner. She won the 2005 Zenobia Empress Handicap by 6 ¾ lengths in a course record :55.54 (since broken). In 2006, she won the Mamzelle on Kentucky Oaks Day and defeated males in the Cherokee Run Handicap on the day before the Breeders’ Cup World Championships. The daughter of Unbridled’s Song was retired in the summer of 2007 with eight wins and $680,380 in 23 starts.

In other news, jockey Giovanni Franco was displaced from his mount, Marine Pilot, on the backstretch of the eighth race, a 1 1/8-mile turf race. Franco, who was conscious and had movement of all extremities, was transported by ambulance to Norton Audubon Hospital for further examination after complaining of soreness in his neck and back. Franco also had a laceration on the left side of his forehead. Marine Pilot, who ran without his rider through the latter stages of the race, was retrieved by an outrider and appeared okay.

COREY LANERIE, jockey of NOBODY’S FAULT (winner) – “I had a perfect trip. We broke well and I got her to the rail right behind the speed. Once we turned for home she started to run on strong. It took me a long time to get the lead – at first I didn't think we would get there – but my horse kept responding.”

NEIL PESSIN, trainer of NOBODY’S FAULT (winner) – “I had her down at Fair Grounds over the winter and she ran bad going a mile, so we tried her going short in an allowance race and she responded well. We eventually gave her a try in the Giant’s Causeway at Keeneland and she ran a really good second. It looks like we’ll have to keep looking at sprint races for her future.”