Craig D. Upham's Patrona Margarita, dismissed by fans as a 23-1 longshot, romped to a 3 3/4-length victory under jockey Brian Hernandez Jr. in the $200,000 Pocahontas (GII) at Churchill Downs - the first race on the 2018 "Road to the Kentucky Oaks (GI)." (Coady Photography, Churchill Downs) 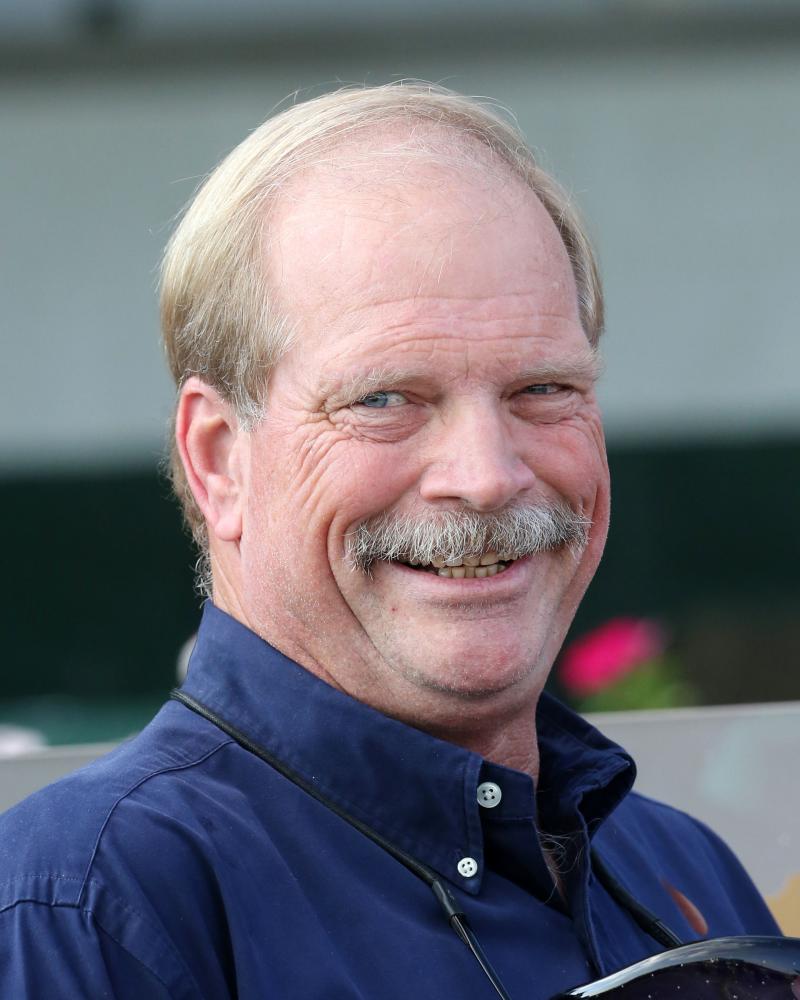 Owner Craig D. Upham beamed in the winner's circle after his homebred Patrona Margarita rolled to a 23-1 upset victory in Churchill Downs' $200,000 Pocahontas (GII) - the launching point for the 2018 "Road to the Kentucky Oaks (GI)." (Coady Photography, Churchill Downs) 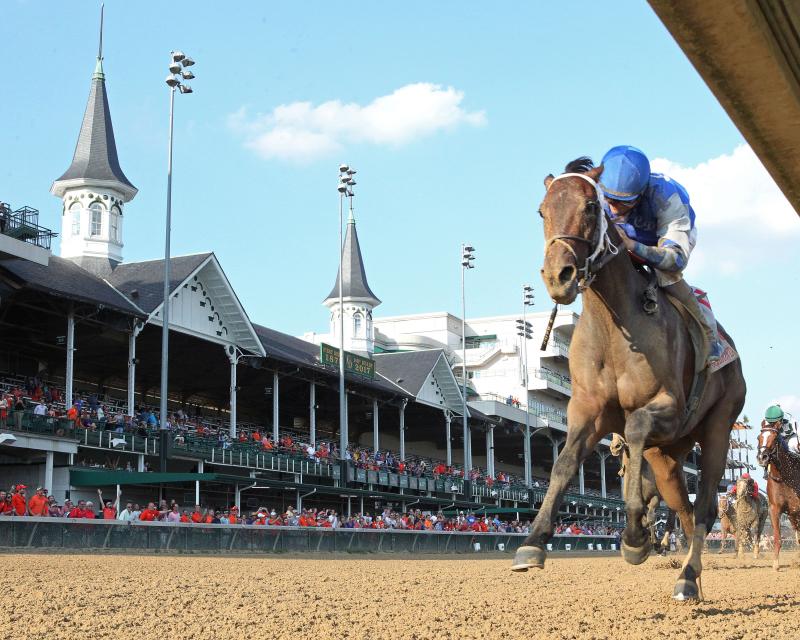 The Texas-bred Patrona Margarita flashed past Churchill Downs' historic Twin Spires on her way to an easy victory at odds of 23-1 for trainer Bret Calhoun in the $200,000 Pocahontas (GII). (Coady Photography, Churchill Downs)

Craig D. Upham’s Texas homebred Patrona Margarita shook things up in Saturday’s 49th running of the $200,000 Pocahontas (Grade II) for 2-year-old fillies as she scored a 23-1 upset win by 3 ¾ lengths over Kelly’s Humor at Churchill Downs.

Primo Extremo led the field through early fractions of :23.68, :48.83 and 1:14.45 as Patrona Margarita raced in midpack in the clear on the outside. The winner pulled herself within striking reach of the leaders around the far run and took command at the eighth pole to comfortably draw away for the victory.

Patrona Margarita also is the early points-leader on the Road to the Kentucky Oaks after collecting 10 points. The Pocahontas was the first of 30 qualifying races to the $1 million Longines Kentucky Oaks (GI) to be run next May, and points were awarded to the Top 4 finishers on a 10-4-2-1 scale.

BRIAN HERNANDEZ JR., jockey of PATRONA MARGARITA (winner): “Her works have been really impressive over this racetrack. She really stepped up today and showed us what she’s made of. We tracked the speed just behind horses. With 2-year-olds you never know how they will respond passing horses and you have to feel good the way she was able to win this race today.”

BRET CALHOUN, trainer of PATRONA MARGARITA (winner): “What a rollercoaster-day. It’s a tough when you think back on what could have been winning two stakes (Calhoun-trained Mayla was disqualified from first to sixth in the Open Mind for interference in the stretch-run) but we are happy to win the Pocahontas. She’s not Breeders’ Cup eligible so we’ll probably point towards the (Oct. 6) Alcibiades at Keeneland. After breaking her maiden over this track we tried her in the Debutante and she got stopped badly. She’s a Texas-bred so we sent her to Lone Star for the Texas Futurity and she ran a solid third. She’s not a sprinter so we knew she’d improve as the distances got longer. She’s trained phenomenally over this racetrack recently and I’m happy to see everything come together.”

CRAIG UPHAM, owner/breeder of PATRONA MARGARITA (winner): “I’m so happy for her effort this afternoon. I bred her which makes things even more special. Bret (Calhoun) and his entire team do such a phenomenal job. With her breeding we always thought she’d do well going around two turns. It’s special to be on the ‘Road to the Kentucky Oaks’ trail. Our horse will tell us where to send her next. I just hope she comes out of the race happy and healthy.”

BRAD COX, trainer of KELLY’S HUMOR (runner-up): “Given our (outside) post and a wide trip – and they didn’t go as fast up front as I thought they would – it was overall a solid effort. I’m real pleased and hopefully it’s something we can build on. I don’t know where we’ll go next, but it’ll be a graded stakes somewhere.”

Q: She was a little antsy behind the starting gate before she loaded. Were you surprised by that? “Yeah, I was probably surprised that she was that antsy, but she’s a young horse and still figuring things out. I think we can improve off this.”

SHAUN BRIDGMOHAN, jockey on KELLY’S HUMOR (runner-up): “I thought she ran good. She ran hard. She’s a really nice filly and I think we haven’t seen the best of her yet.”

Q: It was a little eventful behind the starting gate before he race … “She’s still in the learning process and hasn’t quite figure out her job, but she keeps getting better and better so, hopefully, we have a lot to build on.”

KENNY McPEEK trainer of SUNNY SKIES (third): “It was a good solid race and she’s a good solid filly. We were talking about options on the way back with Robby and maybe we’ll try her on the grass over at Keeneland. We’ve been kind of planning towards fall with her, but she ran well and it was a good solid race. She puts out every time and it’s no disgrace.”

ROBBY ALBARADO, jockey on SUNNY SKIES (third): “I thought she ran well. Turning for home I was in the proper position, the proper spot, but I have to congratulate the winner, who ran by me with authority. We didn’t offer a much of a fight when she (Patrona Margarita) ran by me. She’s a nice little filly. But my filly ran well. She’s consistent. She’s nice. We may try to go in a different direction with her. Turf might be an option.” 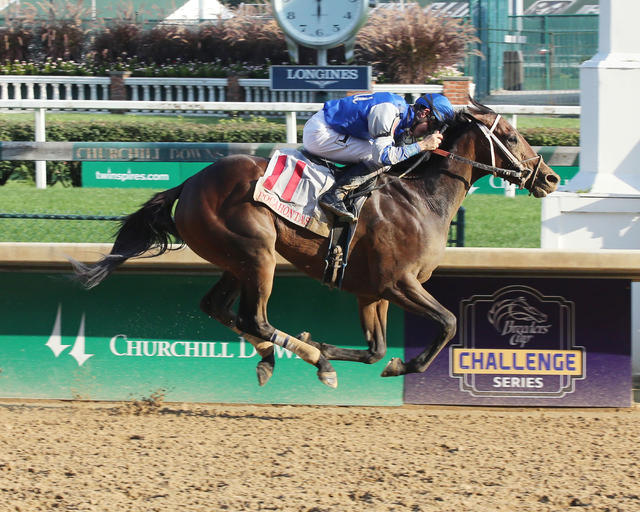