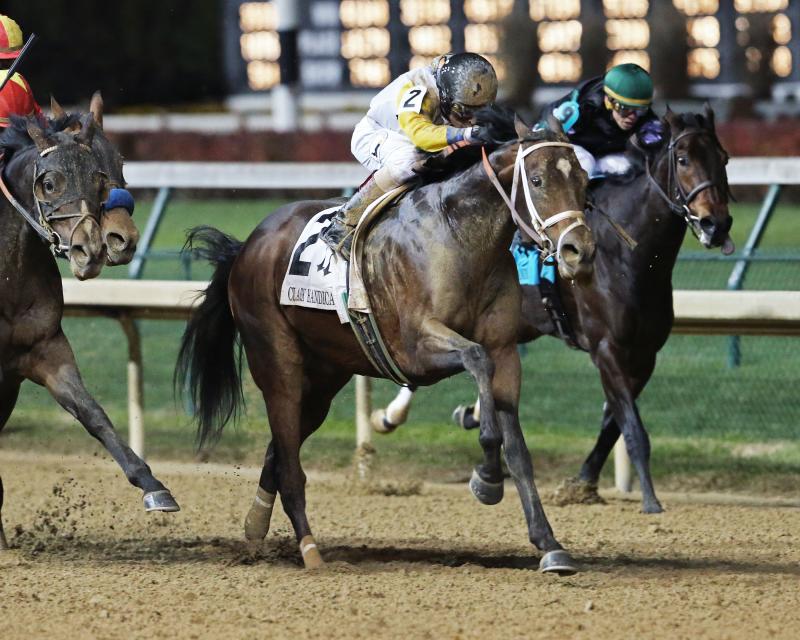 Charles Fipke's homebred Seeking the Soul won the 143rd running of the $500,000 Clark Handicap Presented by Norton Healthcare (Grade I) for trainer Dallas Stewart and jockey John Velazquez. It was the first stakes win in the 17-race career of the 3-year-old son of Perfect Soul (IRE). (Coady Photography, Churchill Downs) 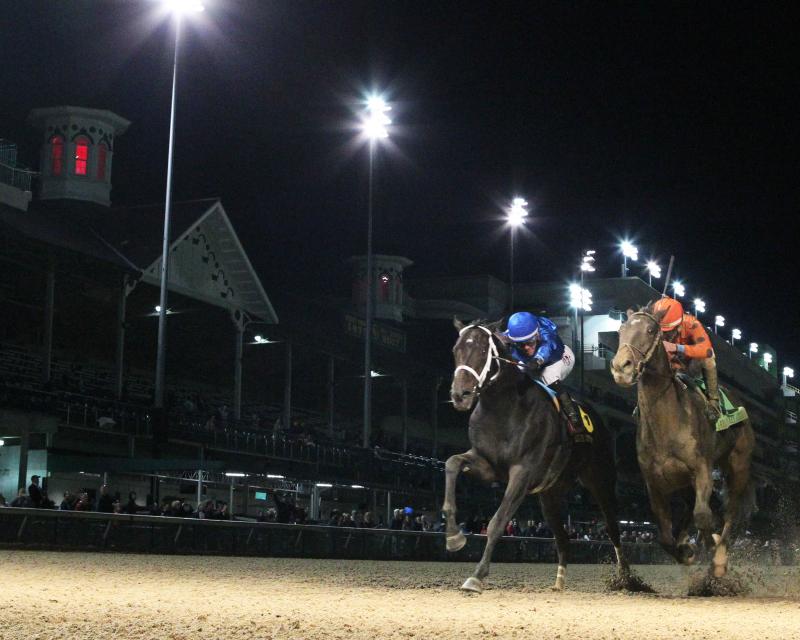 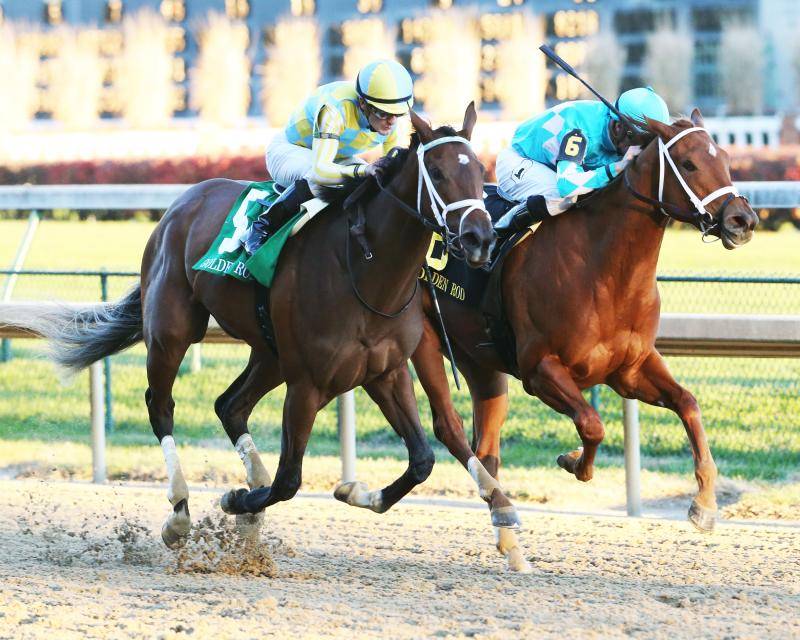 John C. Oxley and Gary Barber’s unbeaten Road to Victory nipped Monomoy Stables and Michael Dubb’s previously undefeated Monomoy Girl by a neck after a race-long duel in the $200,000 Golden Rod (GII), a stop on the “Road to the Kentucky Oaks.” (Coady Photography, Churchill Downs) 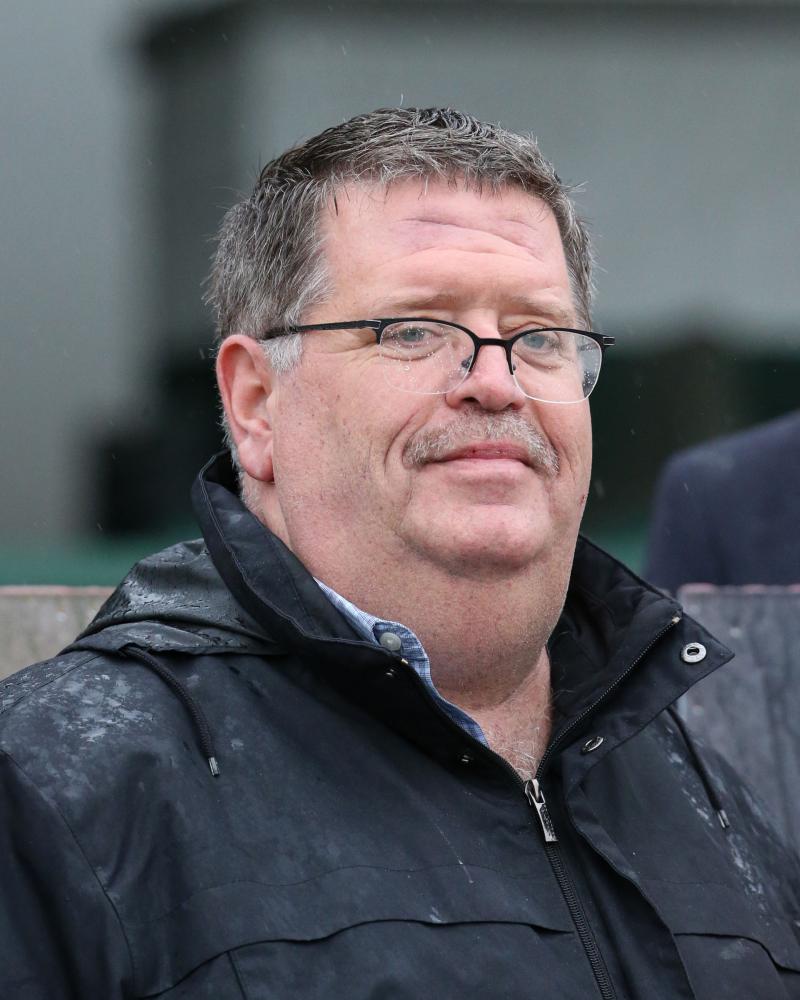 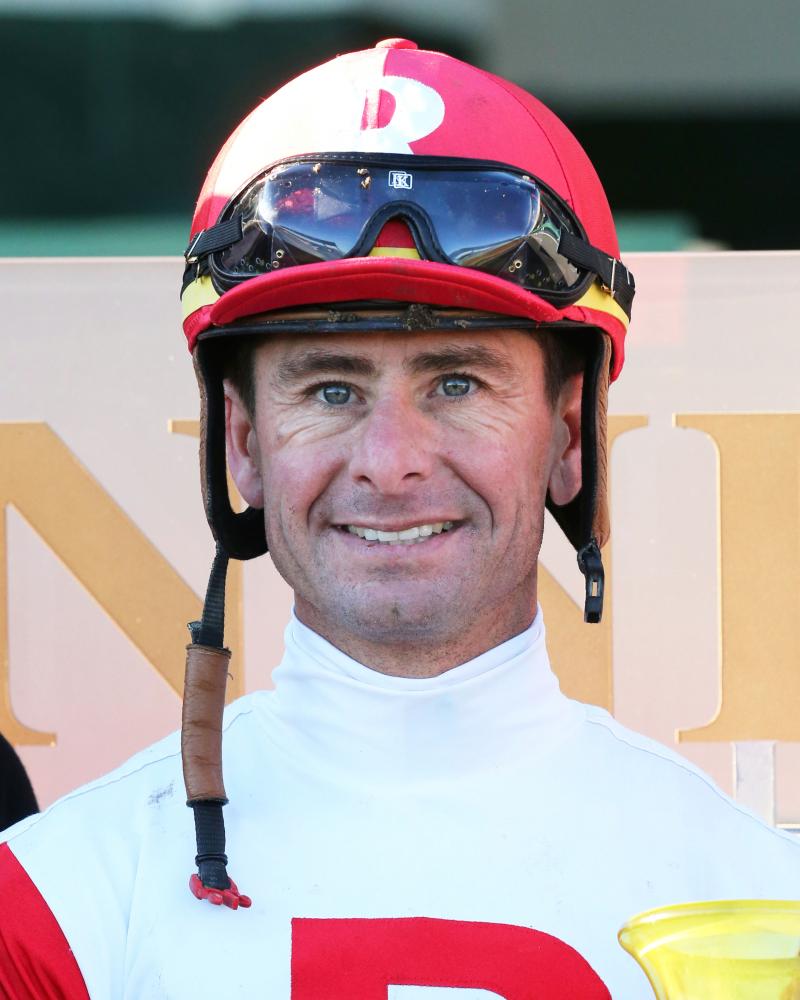 Jockey Corey Lanerie won 38 races during the Fall Meet to earn his 15th leading jockey title in Churchill Downs last 17 meets. With his final win of meet was his 925th at Churchill Downs, which pulled him into a tie with Hall of Famer Don Brumfield for fourth-place on the track's all-time win list. (Coady Photography, Churchill Downs) 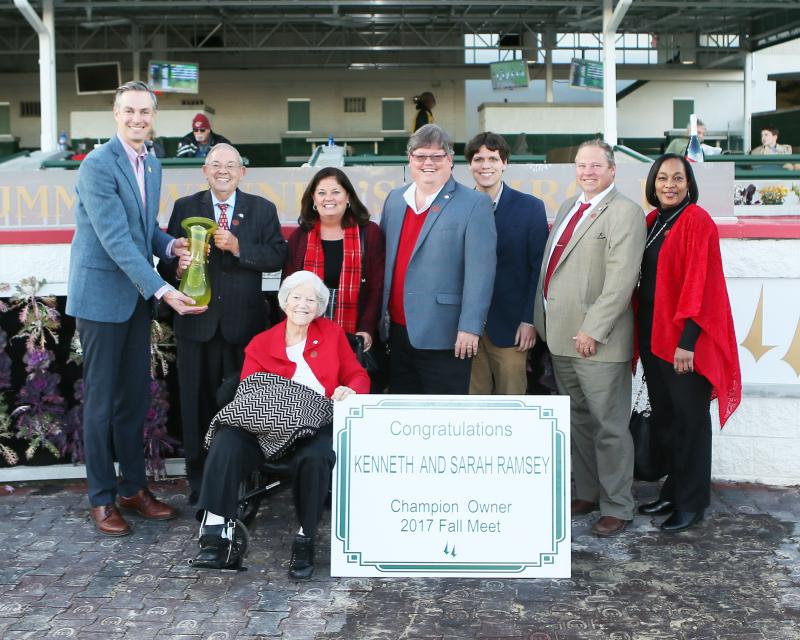 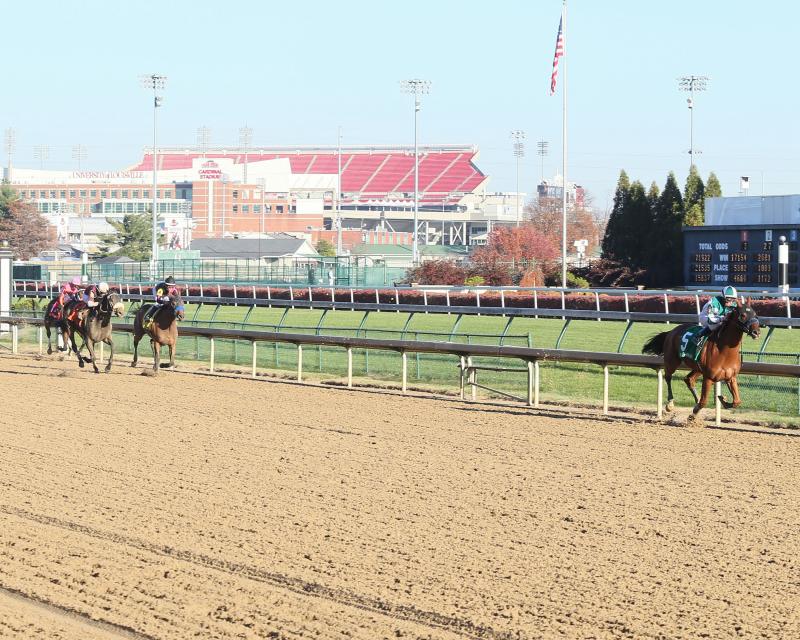 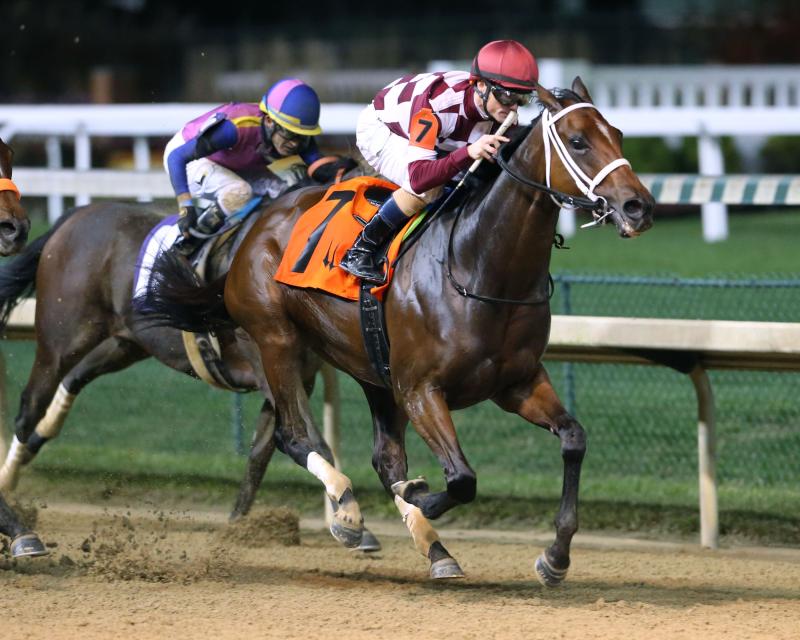 Coffeepot Stable's Farrell, who disappointed in the spring as one of the favorites for the Grade I Longines Kentucky Oaks, returned to form with a victory in Churchill Downs' $200,000 Chilukki (Grade II). (Coady Photography, Churchill Downs)

After a damp and chilly start, Churchill Downs Racetrack’s 21-day Fall Meet gave way to a sunny Thanksgiving Week highlighted by a breakthrough triumph by Charles Fipke’s homebred Seeking the Soul in the $500,000 Clark Handicap Presented by Norton Healthcare (Grade I), dazzling performances by rising 2-year-old Thoroughbreds in a pair of “Stars of Tomorrow” racing celebrations and a record number of sumptuous holiday dinners served to patrons in the track’s traditional Thanksgiving Day racing program.

The excitement of the spectacular closing week placed an exclamation point on the successful racing and entertainment session that opened on Oct. 29 and concluded with a 12-race program on Sunday, Nov. 26. Despite weather concerns that had a particular impact on races scheduled for the Matt Winn Turf Course, fans who enjoyed Churchill Downs races live at the track, in satellite wagering centers throughout North America or via TwinSpires.com and other online wagering platforms wagered strongly on the large and competitive fields in the races offered during the meet.

Churchill Downs’ recently-announced $32 million project that will significantly improve its parking and transportation experience prompted adjustments for some Fall Meet track patrons as parking areas on the west side of the track were closed for construction activity during all or part of the 21-day session. That project is scheduled for completion prior to the 2018 Fall Meet and the return of the Breeders’ Cup World Championship to Churchill Downs for the first time since 2011.

The meet’s special events were topped by the annual Thanksgiving celebration at the track on Thursday, Nov. 23. Churchill Downs Executive Chef Dave Danielson and his team prepared turkey dinners with all the trimmings for more than 8,000 patrons – the largest number of dinners served since the traditional menu of turkey and racing at the track was launched in 1969.

Although occasional damp and chilly weather and adjustments required by early construction work in our exciting parking and transportation project presented some hurdles for both our patrons and horsemen, our Fall Meet was a strong and satisfying racing and entertainment experience that has set the stage for a very exciting 2018,” said Kevin Flanery, President of Churchill Downs Racetrack. “We appreciate the patience displayed by patrons and horsemen who were affected by our ongoing construction and thank them for their support and participation in a memorable 21 days of racing and special events.

"With large numbers of promising 2-year-olds on display, our Fall Meet is always focused on the future. But the visible progress of our construction efforts and the launch of the countdown to next year’s return of the Breeders’ Cup World Championships heightened the anticipation and excitement displayed during in our just-concluded meet, and we join our fans, horsemen, jockeys and residents throughout our region in looking forward to a most exciting 2018.”

The meet’s racing highlights were headed by the Clark Handicap victory by Seeking the Soul and jockey John Velazquez. The 4-year-old son of Perfect Soul earned the first graded stakes triumph of his 17-race career when he held off 3-year-old star Good Samaritan and 2014 Clark winner Hoppertunity in the traditional “Black Friday” racing headliner. With Seeking the Soul’s victory, trainer Dallas Stewart has now won two of the three premier races that date to Churchill Downs’ inaugural racing meet in 1875. Stewart’s Lemons Forever took the 2006 Kentucky Oaks (GI) and he saddled two horses to runner-up finishes in the Kentucky Derby: Golden Soul (2013) and Commanding Curve (2014).

Dramatic and memorable renewals of Churchill Downs’ pair of $200,000, Grade II stakes races for 2-year-olds – the Kentucky Jockey Club and the Golden Rod – highlighted the second of the meet’s popular ‘Stars of Tomorrow’ programs devoted exclusively to racing among rising juvenile stars. Godolphin’s Enticed held off Frank L. Jones Jr.’s Churchill Downs-based Tiz Mischief by a head in the 1 1/16-mile Kentucky Jockey Club, a “Road to the Kentucky Derby” points race. John C. Oxley and Gary Barber’s unbeaten Road to Victory edged Monomoy Stables and Michael Dubb’s previously undefeated Monomoy Girl by a neck after a race-long duel in the Golden Rod, which is a points event on the “Road to the Kentucky Oaks.”

Other major stakes stars during the Fall Meet included James M. Miller’s Lovely Bernadette, winner of the $200,000 Mrs. Revere (GII) for 3-year-old fillies on turf; Merriebelle Stable’s Blue Prize (ARG), winner of the 102nd running of the $200,000 Falls City Handicap (GII) on Thanksgiving Day; and Coffeepot Stable’s 3-year-old filly Farrell, who rebounded from a disappointing run in the Kentucky Oaks in the spring to defeat older fillies and mares in the $200,000 Chilukki (GII).

After a 2016 Fall Meet which had a fast main track every racing day and did not miss a scheduled turf race, weather and track conditions were more significant factors in the just-concluded meet. A total of 20 races were transferred from the Matt Winn Turf Course to the main track during 2017 meet. Those races were part of 10 racing programs, with all scheduled turf races taken off the turf on eight racing days and two other days when one or two scheduled grass races were transferred to the main track.

Despite a significant number of scratches in the just-concluded meet due mostly to damp turf conditions, 1,977 horses started in the meet’s 221 races. The average field for a Fall Meet race was 8.9 horses – which was essentially flat with the 2016 Fall Meet average of 9.0 horses-per-race.

The early days of the Fall Meet saw a historic changing of the guard atop Churchill Downs’ roster of all-time winning trainers when Louisville native Dale Romans surpassed Hall of Fame conditioner Bill Mott with a victory by Team Valor International and Gemstone Stables’ 2-year-old Storm Runner in a maiden race on Sunday, Nov. 12. The victory marked the 703rd career trip to the winner’s circle for Romans, and made the son of the late trainer Jerry Romans the all-time leader in training victories beneath the historic Twin Spires.

“With everything I’ve done in my career at Churchill Downs, and around the country, nothing beats this moment right now,” Romans said minutes after he achieved the milestone. “I’ve grown up on the backside of Churchill Downs. It was my playground when I was a kid and I used to always watch Bill Mott win multiple races per day. Over the years we became friends. He’s called me multiple times and wished me luck. That just shows how classy of a guy he is.”

Mott, 65, held the record for wins by a trainer for 31 years. Romans registered a total of five wins during the meet.

Familiar faces took home championship honors in the Fall Meet’s human races, led by another dazzling performance by jockey Corey Lanerie, who guided 38 horses into the winner’s circle to easily earn the title of leading rider. The riding crown for the 43-year-old native of Lafayette, La. was his 15th in the last 17 meets at the Louisville track. With his win aboard Live Oak Plantation’s Souper Catch in the meet’s final race Lanerie pulled into a tie with Hall of Fame jockey and 1966 Kentucky Derby winner Don Brumfield for total victories at Churchill Downs. Lanerie, whose Fall Meet win total included three stakes victories, will begin the 2018 Spring Meet with 925 wins at the track, trailing only Hall of Famers Pat Day and Calvin Borel and third-place Robby Albarado on the all-time win list.

Ricardo Santana Jr. (19 victories) finished second in the race for leading jockey, and was followed by Julien Leparoux (16), Brian Hernandez Jr. (15), Albarado (12) and Florent Geroux and Jon Court, who tied with 10 wins.

During the meet in which Romans became Churchill Downs’ all-time leading trainer, another Louisville native earned the honor of being its top trainer. Brad Cox edged Hall of Famer Steve Asmussen 13-12 to earn his first Fall Meet training crown. He had his first-ever leading trainer title at Churchill Downs in the track’s September Meet. Cox saddled 55 horses that compiled a record of 13-10-4, which reflected a win rate of 24 percent and 49 percent of his runners finished in-the-money.

Other trainers who enjoyed strong success during the meet were Eddie Kenneally (8 wins), Kenny McPeek (7), Mark Casse (7) and Mike Maker (6).

Churchill Downs will conduct three racing meets in 2018, and its 38-day Spring Meet will be conducted from April 28-June 30. The 144th running of the $2 million Kentucky Derby Presented by Woodford Reserve (GI) is scheduled for Saturday, May 5 and the $1 million Longines Kentucky Oaks (GI) is set for Friday, May 4. Its 11-day September Meet is scheduled for Sept. 14-30 and its 21-day Fall Meet will run Oct. 28-Nov. 25.