Shortleaf Stable’s Plainsman rallied from off the pace, grabbed the lead with a furlong to run and out-kicked 1-2 favorite Beau Liam to the wire to win Saturday’s 29th renewal of the $300,000 Ack Ack (Grade III) at Churchill Downs by one length.

For Rosario it was his fifth win on the day, which marked the 72nd time a jockey has accomplished that feat and the first since Florent Geroux won five races from nine mounts on Sept. 4, 2020. Rosario’s nine mounts earned a hefty $603,170 on the day.

Atoka, with Mr Dumas in tow, led the field of nine older horses down the backstretch in the one-turn mile through fractions of :22.65, :45.21 and 1:09.15 with Plainsman sitting off the pace and in clear.

Leaving the turn after a three-wide move, Plainsman was in fifth behind the leaders and ducked inside to split Mr Dumas on the rail and Atoka on his outside. He grabbed the lead with an eighth of a mile to run and turned back favored Beau Liam, who made his stakes debut after winning his first three starts.

“I was able to sit a good trip for most of the race,” Rosario said. “I knew turning for home I’d have a decision to make whether to keep him inside or go out. I knew I had a lot of horse underneath me and the race developed well for him.”

“This horse has been in great form this year,” Cox said. “I think two-turns is probably his best distance but today he was able to sit a good trip from off the pace at the one-turn mile. He showed a lot of adversity today and ran a good effort.”

Plainsman, out of the Street Sense mare S S Pinafore, was bred in Kentucky by Joseph Minor. 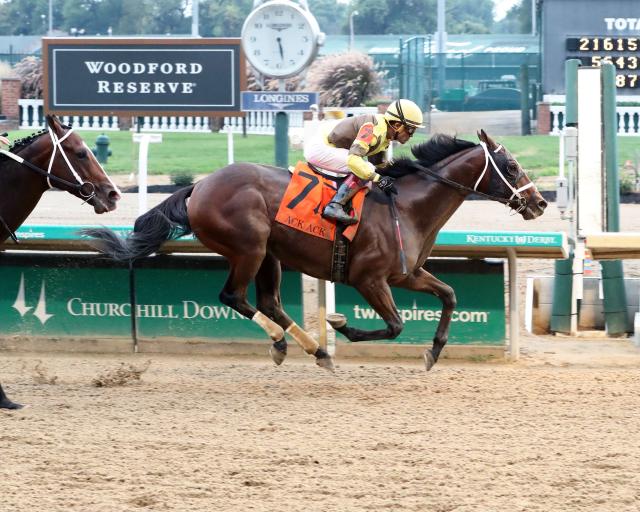