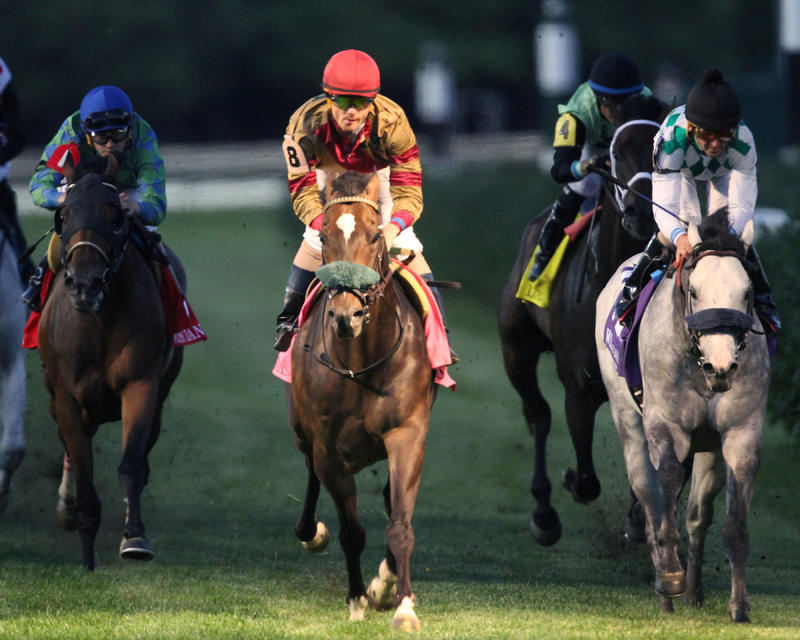 Nelson McMakin’s Pleuven (FR) tracked pacesetter Kasaqui (ARG), drew even with that rival with an eighth of mile to run and inched clear late to post a three-quarter length victory in Saturday night’s 27th running of the $200,000 Wise Dan (Grade II) at Churchill Downs. Thatcher Street was third and favored The Pizza Man was fourth.

Trained by Phil Sims and ridden by Channing Hill, Pleuven covered the 1 1/16 miles over a firm Matt Winn Turf Course in 1:40.96, which is the fastest clocking at the distance over the surface at the Spring Meet.

Kasaqui led the field of 10 older horses most of the way through fractions of :23.81, :48.31 and 1:11.82 as Pleuven relaxed comfortably racing in close pursuit along the inside hedge. Entering the head of the stretch, Hill guided Pleuven into the clear and the gelding quickly came to Kasaqui before edging clear in the final stages.

It was another three-quarters of a length back to $1.40-favorite The Pizza Man in fourth, who was followed by Conquest Typhoon, Flatlined, Behesht (FR), Za Approval, R. Great Adventure and Potomac River. Granny’s Kitten was scratched.

Pleuven is a son of Turtle Bowl (IRE) out of the Singspiel (IRE) mare Under Estimated (FR). He was bred in France by Jean De Cheffontaines.

The Wise Dan, formerly known as the Firecracker, was renamed this year to honor Mort Fink’s 2012-13 Horse of the Year that compiled a remarkable lifetime record of 31-23-2-0—$7,7552,920 from 2010-14, including seven Churchill Downs wins and two Firecracker triumphs. One of the area’s most popular horses, Wise Dan, now age 9, returned to Churchill Downs and the celebrated gelding was paraded to the paddock with horses for the stakes race.

PHIL SIMS, trainer of PLEUVEN (FR) (winner): “He likes the distance, he tries hard. We didn’t really know what we had until we started training him. He’s really on it all the time. He loves to train and loves to run. He’s very competitive. We knew that it would be tough but we were kind of like, ‘Hey this horse deserves a shot.’ (Jockey) Channing (Hill) gets him to relax real well.

Q: Where would his next start be? “We’ll see, we aren’t for sure yet. We’ll just have to sit back and look at it this week.”

CHANNING HILL, jockey of PLEUVEN (FR) (winner): “It was a pretty uneventful trip. The 10-horse (Kasaqui) broke super well and we were kind of hoping that he would and I just wanted to get real cover for him today for him obviously with him being from overseas and he responded terrifically. When I asked him, he was there and when I needed him to tap on the brakes, he was there. He’s just pure class. He really improved on his last race.”

IGNACIO CORREAS, trainer of KASAQUI (ARG) (runner-up): “He runs awesome. After what happened in the Woodford (Kasaqui fell during the race) we wanted to see how he came out of that. But he’s in great shape. Nobody wanted the lead, so we took it. We were a pretty close second, so we can’t complain.”

Q: Any thoughts on his next step?: “Mrs. Perkins and I are going to talk it over and see where he is at. But we’re probably going to go to the Arlington Handicap and see what happens after that.”

ROBBY ALBARADO, jockey on KASAQUI (ARG) (second): “He’s great. I’ll tell you, it felt like 20 years when I rode his daddy (Lasting Approval) for Mrs. Perkins. He has so many of Lasting Approval’s traits. He’s a nice colt, he’s a big good-lookin’ thing, he likes you to take a hold on him and he finishes strong. He’s an improving horse – I like him a lot.” (NOTE: Albarado rode sire Lasting Approval to wins in the 1998 Maker’s Mark Mile (GIII) and 1997 Seattle Slew, both at Keeneland).

IAN WILKES, trainer of THATCHER STREET (third): “He ran good. He’s now placed in a Grade II. He’s moving forward. We beat him (the winner Pleuven) and he beat us today. We’re going to be very close when they run.”

FLORENT GEROUX, jockey of THE PIZZA MAN (fourth): “I think he run a great race, you know. He was far back ... like he usually does. There was not much pace in the front of the race. So he came running. Hopefully a nice campaign for the summer.” 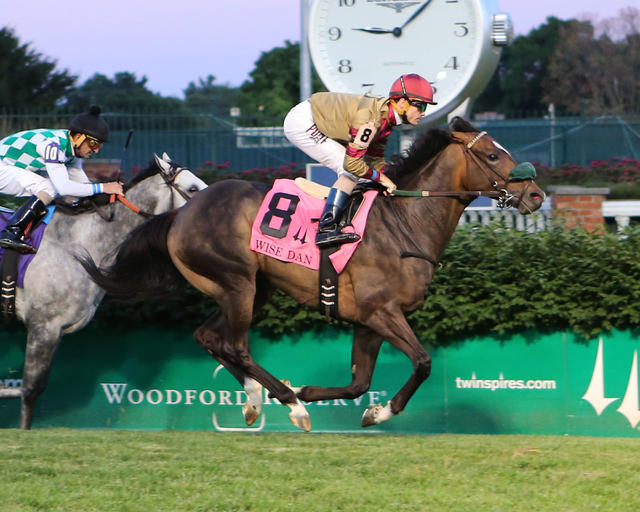