Darrell and Sadie Brommer’s 6-year-old homebred mare Prado’s Sweet Ride led every step of the way and drew off in deep stretch for a decisive 4 ¾-length triumph over odds-on 3-5 favorite Devine Miss Grey in the 103rd running of the $200,000 Falls City Handicap (Grade II) for fillies and mares on Thanksgiving Day at Churchill Downs.

Breaking from post No. 6 in the field of seven, Chicago-based Prado’s Sweet Ride broke on top and dictated the terms through fractions of :23.93, :48.60 and 1:13.17. Devine Miss Grey stalked the pace from the inside and came within 1 ½ lengths of the leader at the top of the stretch, but Prado’s Sweet Ride turned back the challenge and drew away late while being geared down in the final yards.

“I really didn’t expect to be on the lead but I thought we would be close to the pace,” Geroux said.
“Things worked out well. We had a perfect pace up front when (Divine Miss Grey) didn’t break that sharply. She dug in well down the lane and was very impressive this afternoon.”

Prado’s Sweet Ride, who carried 118 pounds during the victory, is an Illinois-bred daughter of the Block-trained stallion Fort Prado out of the General Meeting mare Excellent Idea.

“This has been a very good Thanksgiving for us thanks to this filly,” said Block’s assistant trainer Martin Martinez. “She ran so big this afternoon and trained so well all season. She really handled the dirt well this afternoon and she has in the past. She’s been very versatile and was very impressive today.”

For Block, this was his second Falls City Handicap victory. He won the 2010 Thanksgiving Day renewal with 3-year-old filly Dundalk Dust.

Prado’s Sweet Ride returned $13.80, $4.80 and $3.60 as the 5-1 second betting choice. Devine Miss Grey, who carried the 122-pound starting high weight under Tyler Gaffalione, finished second and returned $2.40 and $2.10. Dutch Parrot was another length back in third and paid $4 to show under Ricardo Santana Jr. while carrying 116 pounds.

The Falls City is the traditional main dish on the Thanksgiving Day menu at Churchill Downs – a Louisville tradition since 1969 where more than 8,000 turkey dinners are served with all the trimmings, making it the largest number anywhere in the region.

This year’s holiday program also included the 45th running of the $100,000 Cardinal Handicap (GIII), a 1 1/8-mile test for fillies and mares over the Matt Winn Turf Course, which was won by English Affair. 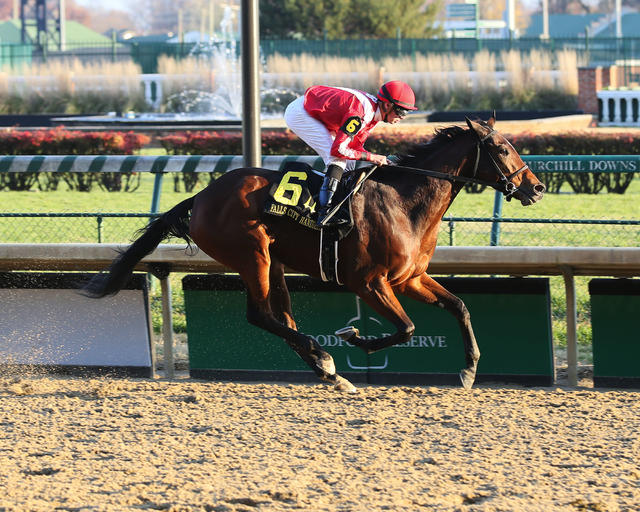