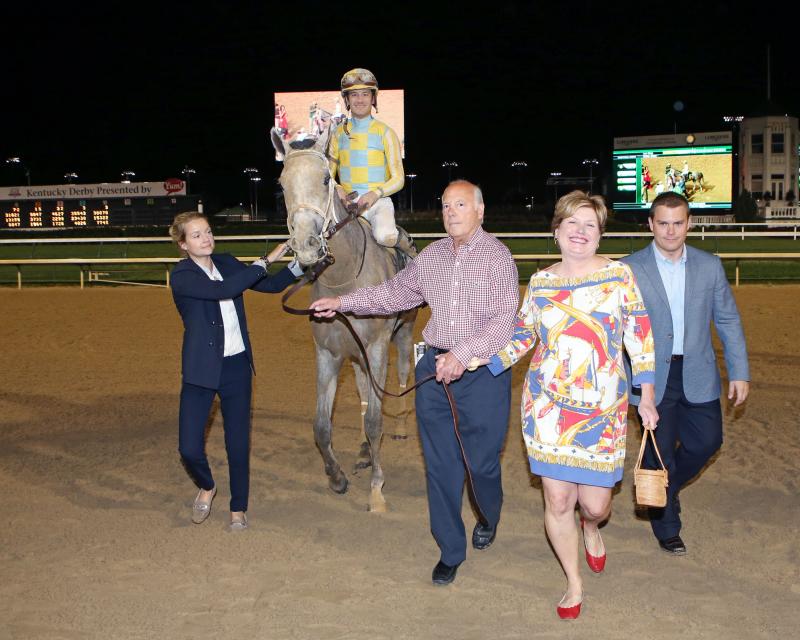 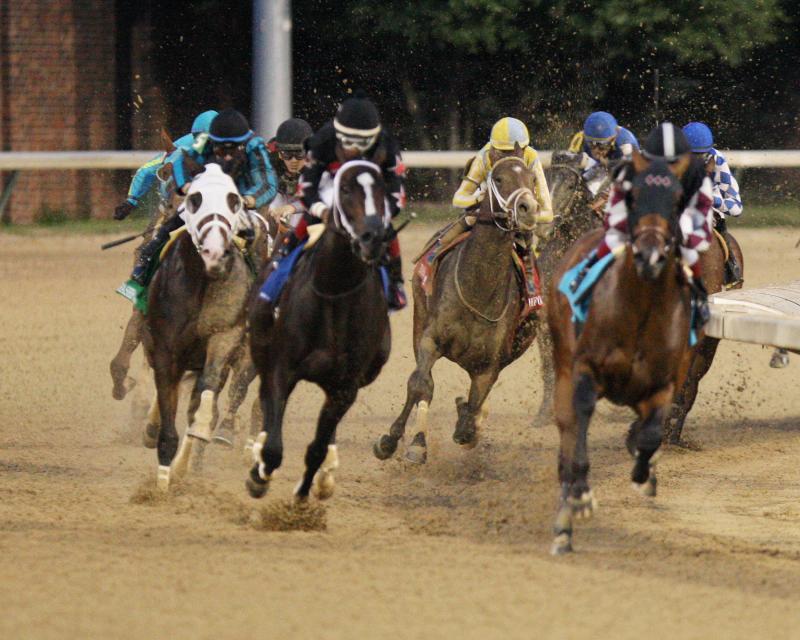 Pretty City Dancer and jockey Julien Leparoux (center, gold and blue silks and cap) sill had plenty of work to when the field of 10 2-year-old fillies turned for home in the 116th running of the Debutante Stakes. The daughter of Tapit rallied from eighth to win by 3 1/4 lengths. (Coady Photography | Churchill Downs)

John C. Oxley’s Pretty City Dancer broke a bit slow coming out of the starting gate, but still managed to run home to victory in the 116th running of the $100,000 Debutante Presented by GE Appliances (Listed) on Saturday evening at Churchill Downs in come-from-behind fashion by 3 ¼ lengths.

Trained by Mark Casse and ridden by Julien Leparoux, Pretty City Dancer covered the six furlongs on the Churchill Downs main track in 1:11.01 to give the owner, trainer and jockey their second stakes victory of the evening. The trio teamed up to win the Bashford Manor Presented by Thorntons (GIII) with Classic Empire one race earlier.

Like A Hurricane broke on top running the first quarter-mile in :21.60 and the half in :45.87 while being tested by Tricky One who sat a close second early in the race. Lukewarm 3-1 favorite China Grove also was up close in the beginning stages, but was through after the half. At the top of the stretch, Pretty City Dancer shifted into the four path, asserted herself to the front and never looked back. Anna’s Bandit closed late to get second with Country Candy finishing third.

Pretty City Dancer, a gray or roan filly born on April 3, 2014, is a daughter of Tapit out of the Carson City mare Pretty City and was bred in Kentucky by Gainesway Thoroughbreds, Ltd.

The Debutante victory also clinched the Spring Meet training title for trainer Mark Casse, who took home his first Churchill Downs title since winning his only other local crown at the 1988 Spring Meet.

NORMAN CASSE, assistant trainer of PRETTY CITY DANCER (winner): “She’s super talented. I think that she may take a little bit longer to become a true professional but the sky is the limit for her. She has all the ability to be a really good racehorse. We just need her to get that racing experience to become really good. I think we’ll wait and see and when she’s ready we’ll point her to one of the races up there.”

JULIEN LEPAROUX, jockey of PRETTY CITY DANCER (winner): “From the start she broke a bit slow but then she travelled the whole way around it and the only difference was that I took her outside this time. She is just a little green. In the mornings she still looks around a little bit so it was a good learning experience. I think that she’ll get better with more races. She’s got a lot to learn still. I think that Classic Empire is a little bit more professional, he does everything you want him to. The filly is a little more green, but they both have ability and we liked them from a couple of months ago.”

ERIC CAMACHO, jockey on ANNA’S BANDIT (runner-up): “She didn’t break that sharply and they kind of outrun me out of the gate, so I had to ease her back and she settled nicely, which was what I was hoping for. I didn’t plan on her being that far back, but that’s the way she seems to want to run. She did the same thing at Belmont (in the Astoria) and she did the same thing here. She makes move at about the five-sixteenths pole, circles the field and gives you that big run. She wants more ground, to be honest with you, because she’s still galloping out past the wire. She never switched leads and Belmont and I finally got her to switch leads here.

“She’s running through the wire and she’s a West Virginia-bred and eligible for the Maryland Million, but she was running with the big girls here. A sixteenth of a mile into the gallop out I passed the winner. Obviously that doesn’t count, but she’s getting there.”

J.R. CALDWELL, trainer of COUNTRY CANDY (third): “She ran very well. She ran good in Texas and we thought a lot of her, so we brought her to the races and tested her and she showed up. That’s the biggest thing we wanted, so we’re happy. (Trainer Bret) Calhoun came up her and ran well with Texas fillies a few times, so he’s been successful at it and we thought we’d take a shot at it.

“She’s so classy – she does everything right and she’s fast from the gate. It was her first time going six furlongs and in her works she had galloped out really strong, so we thought we’d come here and give her a new stadium to play in.”

RICARDO SANTANA JR., jockey on COUNTRY CANDY (third): “She’s a really nice filly. She’s going to be pretty tough next race. It was my first time on the filly, and with 2-year-olds it’s pretty hard when you ride them first time. That was the first time she had caught dirt in her face, and for the first time she was pretty comfortable. If I’d known she could handle that, she could have run so much better.” 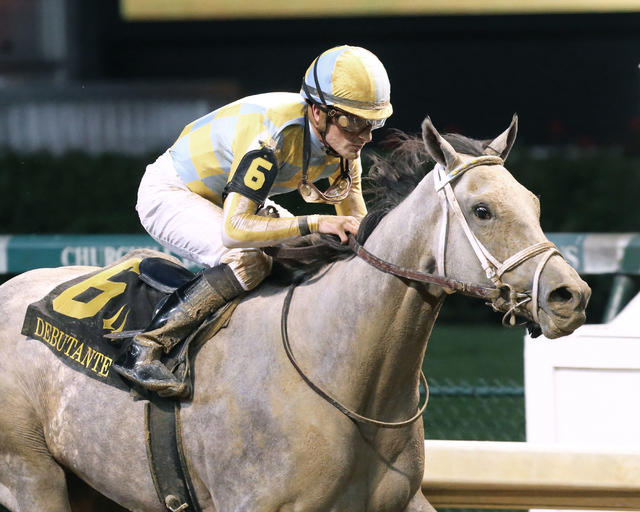