One week ago, trainer Eric Reed stood on hallowed grounds in the Kentucky Derby winner’s circle following Rich Strike’s shocking 80-1 victory in the “Run for the Roses.” Reed joined the cast of “Inside Churchill Downs” on ESPN Louisville Friday to relive his memorable Kentucky Derby experience. Here is part of that interview:

Question: Does it finally feel real that you are a Kentucky Derby winner?

Reed: “I think it has. The first couple of days I can’t say it did. It has now. I shed a lot of tears watching the videos and reading the fan mail that’s come in. It’s finally sunk in.”

Question: Can you relive the events leading to the late scratch of Ethereal Road and getting in the race?

Reed: “I don’t really want to go through that kind of stress anymore. We were No. 24 after the Jeff Ruby Steaks, then we got to No. 22 in points. They ran the Lexington and we got back to No. 24. Then, we arrive at Churchill and we hear a couple may defect. We got to No. 21 and the last three days (before the scratch) it was like watching every tic of sand in the hour glass drop. About 15 minutes before (scratch time) we were told we wouldn’t get in. They took our security guard away and I made some texts. I gave (Daily Racing Form’s) Marty McGee a condolence speech. Then, with a minute to go, they called me and said we were in. You just can’t go explain going through those emotions so quickly. It’s just something I never experienced.”

Question: At what point in the race did you think you had a chance to win?

Reed: “When Sonny (Leon) made the move at the quarter pole to drop inside I hadn’t seen him. I knew going into the turn he had fallen into that group of horses just off the pace. Then, it was just a matter of if he could get a seam and how many could he run by. Then, when they turned for home, I couldn’t see him. I asked my friend where we were and he said ‘That’s you on the rail. I think you’re fifth or sixth.’ I still didn’t think I could win it but I was so happy because I knew he would run good. When he went around Messier (at the eighth pole) I remember telling my dad ‘I think we’re going to hit the board.’ It wasn’t much after that he collared the leaders and won. Man, it was a rush.”

Question: In 2016 you had a barn fire caused by a lightning strike at Mercury Equine Center that killed 23 horses. What does it take to overcome the pain of losing those horses to rebuild your stable?

Reed: “It was a night that no person on Earth should ever have to live through. It wasn’t just me that had to live through it. All my employees lived through it. All my clients lived through it. All of my friends who were there the next day lived through it. My family lived through it. We thought the flames and the burning and the screaming of the horses that night was as bad as it could get. But, when the sun came up that next morning, and you actually saw what happened, that was the worst part. It was a massive storm system that went through the area. We had lightning rods on all the barns and buildings – we still do. It was just one of those things that wasn’t going to make a difference. It was a terrible, terrible thing. You learn a lot about yourself and the people around you when those things happen. I can tell you exactly what got me through it and that was love and kindness.”

Question: Did you come close to throwing in the towel?

Reed: “I had thrown the towel in the next day when I had to look through the barn and identify the horses. I had given up. I told my daughter and my dad ‘I’m done.’ This is a game that you have to have it in your heart and it was like someone just ripped it out. I just was so bitter and angry. When I saw my 23 horses laying there it’s someone that no one should have to see. It didn’t’ last long because people brought me out of that dark spot. And I thank God because we wouldn’t be here today.”

Reed: “We actually tried to claim another horse in that race as well (Twitchy). We picked that horse immediately when we were handicapping the race. I found out that horse never ran again. We lost that (three-way) shake. I had handicapped the race and I told (owner) Rick (Dawson) I wonder if there was another horse in the race that would save the condition for next time. I kept looking and I kept coming back to Rich Strike. This horse had really super workouts. He had great connections. He was bet on (first out). The only thing that didn’t make sense was running on the turf first out. Then I got to thinking it was early in the 2-year-old campaign. Probably the only way you could get a distance race was running him on the turf. And they probably just took a shot. The logical thing after he ran last would be to run him back for a tag. So, they did what I would have done if I was training him. Probably no one realized he would be a Derby horse. I told Rick we should claim this horse as well. If the turf made him run poorly you’re going to make a really good claim for the dirt. Rick asked, ‘What if he didn’t like the dirt?’ I said, ‘He wouldn’t have been working so fast on it before his first start and they wouldn’t have bet on him.’”

Question: Rich Strike paid 80-1 in the Derby. Did you have any friends that made big scores on the race?

Reed: “I had one of my friends make six figures. I had some other friends that made $70,000-$80,000. After taxes, of course. I heard a lot that made $12,000-$15,000 betting $50 across the board or something like that. I think many of them did it just because it was us and to root for the horse as a fun bet. I had some guys that keyed him in the exotics and did some crazy things. It was really good for them. I can tell you I did not bet $2. I wanted to bet a $2 ticket just for a souvenir but I was so caught up in what was happening that I forgot to do it. I’m probably the only one in the entire barn that didn’t have at least $2 on him.”

Question: How difficult was the decision skip the Preakness and forego an opportunity at the Triple Crown?

Reed: “In one aspect, it’s the hardest decision I ever had to make as a trainer and in another it wasn’t hard at all because I knew it was the right thing for the horse. In the horse industry there’s the Triple Crown and there’s our egos to try and become a Triple Crown winner. We sat down and weighed out all the options. What kept coming across to me was all along I told Rick I couldn’t work him every seven days, I had to work him every 10. That’s how he likes it. I can’t run him back quickly because it takes him that long to get mentally focused again. I kept coming back to the race at Fair Grounds (the Gun Runner) and how he wasn’t on schedule and he missed training. And he was not himself. I kept replaying that in my mind and no matter how good he was doing that running back in two weeks has never been tried with him. If he went to Pimlico and wasn’t mentally ready to run it was all for nothing. Then it would kill my chance for the race I think we’re most likely to be competitive in and that’s the Belmont. So, in the best interest of Richie and his career, which I hope is a long career with lots of races involved, the Preakness didn’t line up for him. He has the worst running style in the world for a race like that. If he was a stalker and had more speed, the decision to run him may not have been as hard. He’s just the opposite.”

To listen to more of Reed’s interview on “Inside Churchill Downs”, visit: https://soundcloud.com/user-204761944/inside-churchill-downs-with-derbymedia-horseracingkk-scottshap34-5-13-2022.

“I’ve been in this winner’s circle a lot with my dad but to be here today as winning trainer is an unbelievable feeling,” Will Walden said. “It’s truly surreal.”

Walden, who is based at Keeneland, made his training debut at the Lexington, Ky. track in April. Dazzlingdominika was his fourth starter.

Ready Made Racing was started from an idea of Will Walden and Taylor Made Farm’s Frank Taylor. The venture was created in part to help those recovering from substance abuse. Will Walden became sober in late 2020. His exercise rider, Tyler Maxwell, and groom, Mike Lowrey, all met at the residential recovery center Shepherd’s House in Lexington. Maxwell and Lowery both participated in Taylor Made Farm’s pilot horsemanship program in 2021.

Fans will get expert analysis each race day from host Joe Kristufek along with several analysts such as Kaitlin Free, James Scully, Scott Shapiro and Brandon Stauble.

CHURCHILL DOWNS RACING TO AIR ON FOX SPORTS – Churchill Downs racing will air throughout the Spring Meet on the Fox Sports family of networks as part of “America’s Day at the Races,” which is produced by the New York Racing Association. Racing this week from Churchill Downs will air at the following times:

DOWN THE STRETCH – There was a $7,545 carryover in the 20-cent Derby City 6 Saturday which spanned Races 4-9. First post was 6 p.m. … The racing week will close Sunday with a nine race program which begins at 12:45 p.m. … Preakness stakes contender Un Ojo, who was forced to withdraw from Derby contention due to a minor foot bruise, worked five furlongs in 1:02 Saturday at Churchill Downs. He’s scheduled to van to Pimlico Monday. … Australian racing royalty Gai Waterhouse was on the backside of Churchill Downs Saturday morning. Waterhouse, known as the “first lady of Australian racing” has won more than 130 Group I races including six Golden Slippers, eight Metropolitan Handicaps and the Melbourne Cup. Waterhouse was visiting several trainers at Churchill Downs, including Brad Cox and Australian natives Brian Lynch and Ian Wilkes. … For more information about the Churchill Downs Spring Meet, visit www.ChurchillDowns.com. 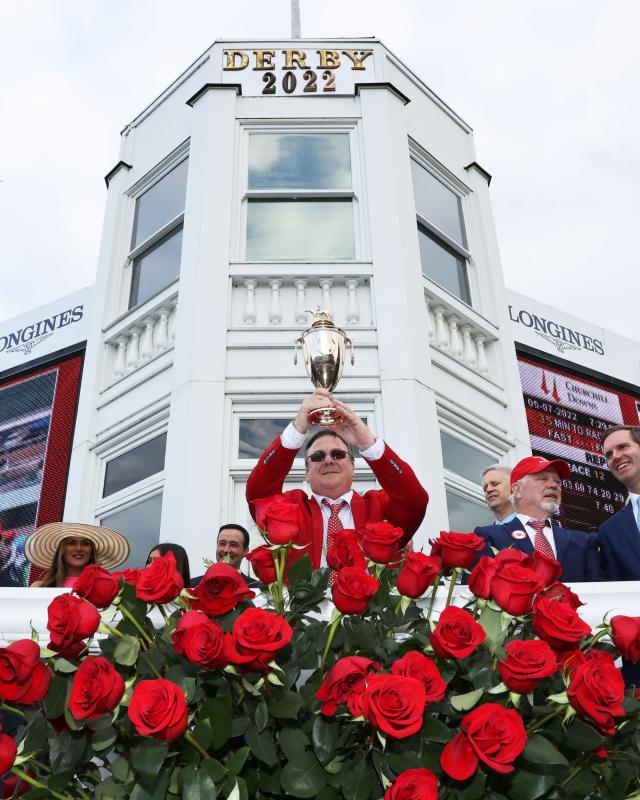