Rider Quotes from the 145th Running of the Kentucky Oaks

May 4, 2019
Churchill Downs Communications
LOUISVILLE, Ky. (Friday, May 3, 2019):
JOSE ORTIZ, rider of Serengeti Empress (1st) – “She’s such a fast filly. She took me to the front and she fought the entire way around there. I’m so thankful to (trainer) Tom (Amoss) for allowing me to ride this filly. This is an incredible win.”
CHANNING HILL, rider of Liora (2nd) – “Man, that was just heartbreaking. She ran so good. I thought we had it. That was an amazing race. Wayne (Catalano) had her so ready to run and we almost got there.”
Ricardo Santana Jr., rider of Lady Apple (3rd) – “She ran a super race. I thought it may have been a little quick back but she’s a very talented filly.”
Chris Landeros, rider of Champagne Anyone (4th) – “I had to check very hard right as we passed the wire. (Street Band) came out on us and we lost stride for a bit. When I got her settled, she got into a nice rhythm but was a bit far back. She ran a super race, though. She’s a very nice filly and I’m so appreciative to the owners and (trainer) Ian (Wilkes) for giving me the opportunity to ride this horse.”
Flavien Prat, rider of Bellafina (5th) – “She broke a little slow but she always does. In California, with a five-horse field, you are not that far back after (a slow) break. The break was not the issue. I thought I was in a good spot, but when it was time to fire, she just didn’t.”
Javier Castellano, rider of Jaywalk (6th) – “She broke good out of the gate and then was in a good spot on the first turn. Unfortunately, she didn’t fire for some reason. She had clear running but when I asked her for run at the three-eighths pole, she had no response.”
Sophie Doyle, rider of Street Band (7th) – “This day was absolutely incredible. I’m so appreciative to Larry and the owners for giving me this opportunity. Hopefully this is the first of many.”
Julien Leparoux, rider of Chocolate Kisses (8th) – “We really didn’t have any excuses.”
Mike Smith, rider of Motion Emotion (9th) – “She ran OK. She got tired of chasing the filly that won. She broke extremely well and the game plan was to take her back. Maybe if I just left her alone, I think she would have run better. I was not going to beat the winner though.”
Luis Saez, rider of Jeltrin (10th) – “The track is playing pretty favorable to horses up front. We weren’t able to make up any ground.”
Irad Ortiz Jr., rider of Out for a Spin (11th) – “She ran good. She was in a good spot but she didn’t give me too much.”
Joel Rosario, rider of Flor de La Mar (12th) – “On the first turn, she got a lot of kick back in her face and she was not happy with that. After that, she went the other way.”
Brian Hernandez Jr., rider of Restless Rider (13th) – “She just didn’t fire today.”
Manny Franco, rider of Positive Spirit (DNF) – “I clipped heels out of the gate. I’m OK.” 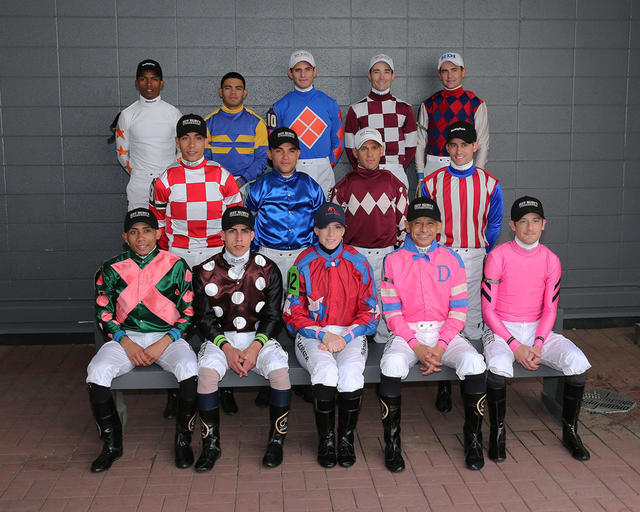