The “Road to the Kentucky Derby Presented by Woodford Reserve” officially begins Saturday as 10 promising 2-year-olds, led by Albaugh Family Stables’ 19 ¼-length maiden Dennis’ Moment, were entered in the 38th running of the $200,000 Iroquois Stakes (Grade III) at Churchill Downs.

The 1 1/16-mile Iroquois, one of four stakes events on the first Saturday of the 11-day September Meet, is the first scoring race on the 2019-20 “Road to the Kentucky Derby” – the series of 35 races that will ultimately determine the field for the 146th running of the Kentucky Derby Presented by Woodford Reserve (GI) on Saturday, May 2, 2020. Points awarded to the Top 4 Iroquois finishers will be 10-4-2-1 as part of the 19-race “Prep Season” that showcases foundation-building races in advance of the “Kentucky Derby Championship Series,” which begins in late February.

The Iroquois also is part of the Breeders’ Cup “Win & You’re In” program with the winner receiving an automatic berth into the $2 million Breeders’ Cup Juvenile (GI) on Nov. 1 at Santa Anita.

Dennis’ Moment (2-1-0-0—$30,000), the likely odds-on favorite in the Iroquois, dominated a field of 12 on July 27 at Ellis Park. The colt by Tiznow has recorded three-straight five-furlong bullet workouts leading into Saturday’s Iroquois including his latest move in :58.80 Saturday morning at Churchill Downs.

“I can only think of one other horse that I’ve trained that has shown this much potential as a 2-year-old and that’s Not This Time (who won the 2016 Iroquois and was second to Classic Empire in that year’s Breeders’ Cup Juvenile at Santa Anita),” trainer Dale Romans said. “I think we are all looking at a potential future star. Even though this horse is only a maiden winner, the way he was able to just simply dominate the competition that day at Ellis Park left me breathless. I am going to start acting like a football coach and say ‘one race at a time’ with him. Let’s just get it done Saturday and then see where we stand.”

Irad Ortiz Jr. has the mount on Dennis’ Moment who drew post position No. 8.

Among the competitors to Dennis’ Moment in the Iroquois is Saratoga Special (GII) runner-up Scabbard (2-1-1-0—$94,848). Trained by Eddie Kenneally, Scabbard (who formerly raced under the name Noose) broke his maiden by five lengths in his debut on June 28 at Churchill Downs. The son of More Than Ready was the runner-up behind the well-meant Green Light Go in the $200,000 Saratoga Special.

Churchill Downs leading rider Corey Lanerie has the call on Scabbard and will break from post 3.

Also entered in the Iroquois is Ellis Park Juvenile winner Rowdy Yates. Owned by L and N Racing and trained by Hall of Famer Steve Asmussen, Rowdy Yates (3-2-1-0—$100,198) won his debut at Churchill Downs by 4 ¾ lengths and finished second to Phantom Boss in the $125,000 Bashford Manor (GIII).

The Oklahoma-bred son of Morning Line will stretch around two turns for the first time in Saturday’s Iroquois with Tyler Baze in the saddle from post 4.

Also entered in the Iroquois field is the Kenny McPeek-trained duo of Flute Maker and January Won. Flute Maker, owned by Fern Circle Stables, stormed home to an 11 ½-length win in an off-the-turf maiden race at Saratoga. Jose Ortiz has the mount on Flute Maker who drew post 6, four spots inside of Harold Lerner’s January Won, who defeated a field of six in a restricted maiden special weight contest at Saratoga. Brian Hernandez Jr. has the call on January Won from the outside post.

The Iroquois shares Saturday’s spotlight with the 51st running of the $200,000 Pocahontas (GII) for 2-year-old fillies, a 1 1/16-mile event that kicks off the “Road to the Kentucky Oaks” and is part of the Breeders’ Cup “Win and You’re In Juvenile Fillies Division.”

The four stakes are part of the late 50-cent Pick 5 and 20-cent Single 6 Jackpot sequence.

The seventh annual September Meet begins Friday at Churchill Downs with a 10-race program at 12:45 p.m. and continues on a Thursday-Sunday schedule through Sept. 29. This year’s three-week, boutique race meeting will feature record purse levels as horsemen compete for $8.314 million in prize money, which averages to $755,818 per day and $76,275 per race.

Opening weekend weather in Louisville will be ideal, according to the National Weather Service, with a forecast of mostly sunny skies and temperatures in the upper 80s. 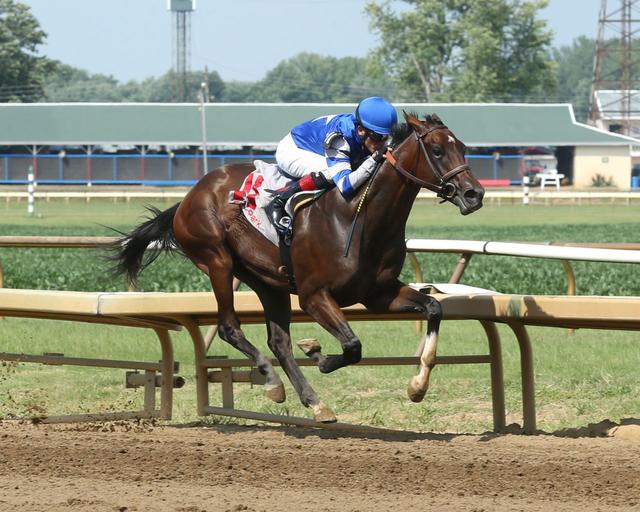