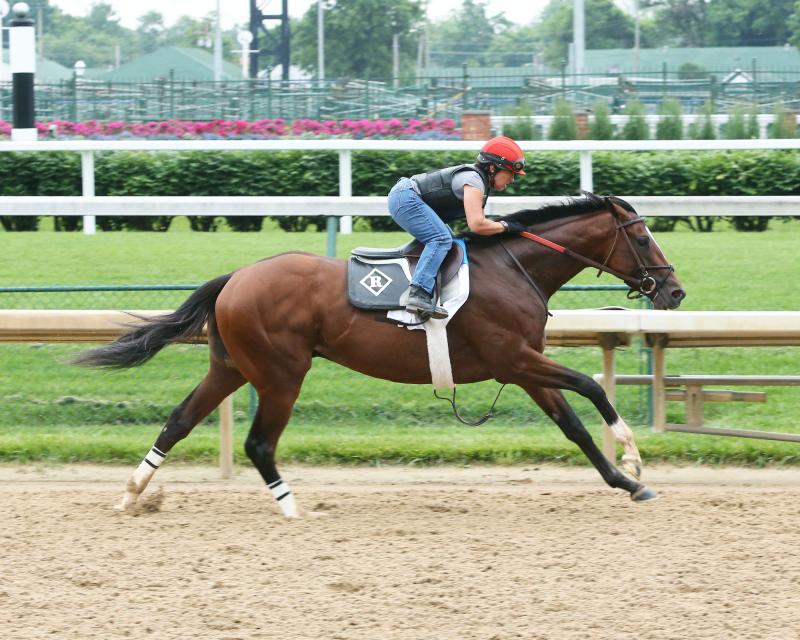 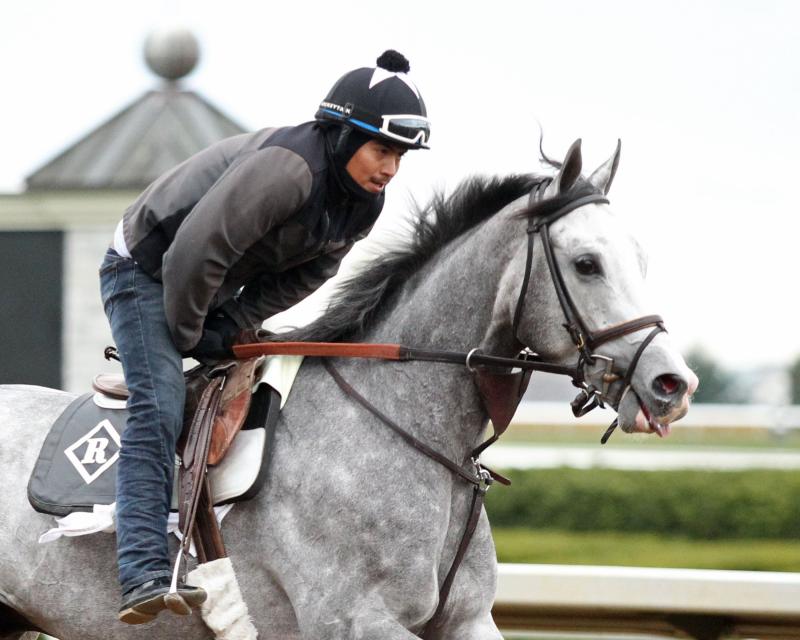 William Pacella and Frank L. Jones Jr.'s Cherry Wine, shown in an April gallop at Keeneland, worked four furlongs in :47 on Saturday - the best of 77 moves at the distance. The Dale Romans trainee finished second in the Preakness (GI). (Coady Photography | Churchill Downs) 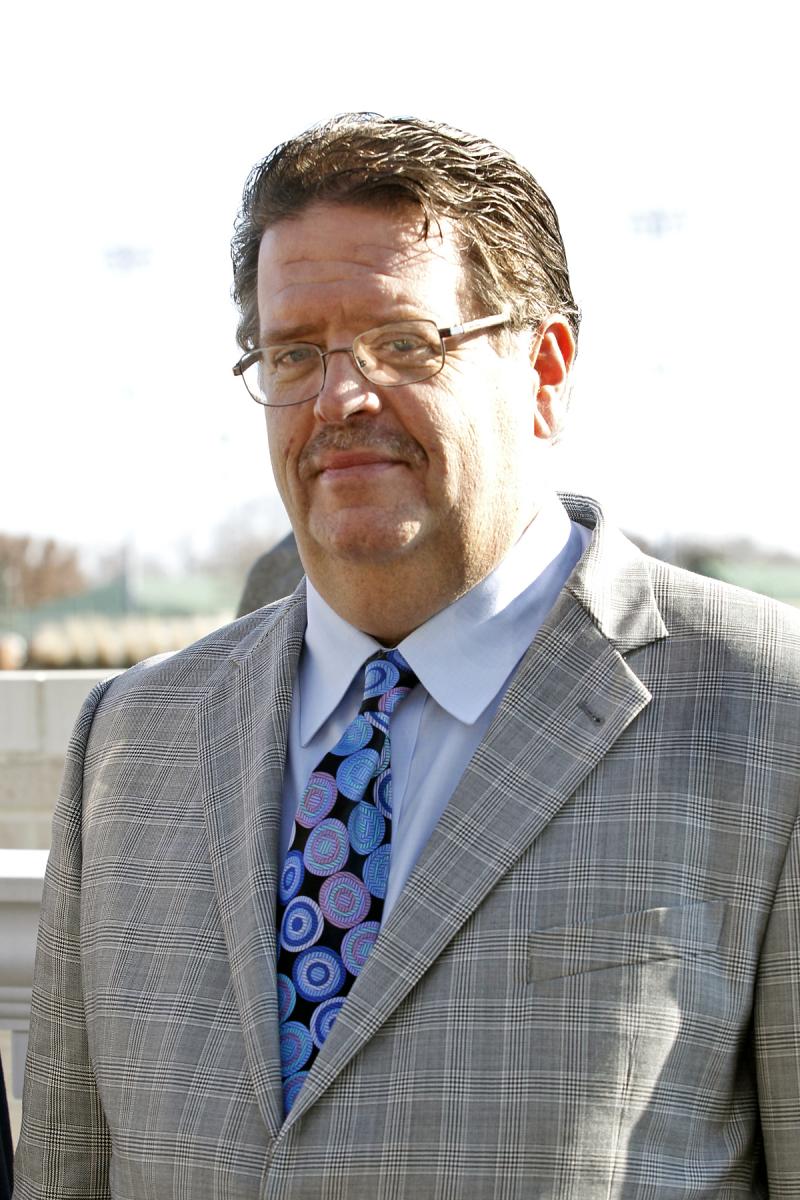 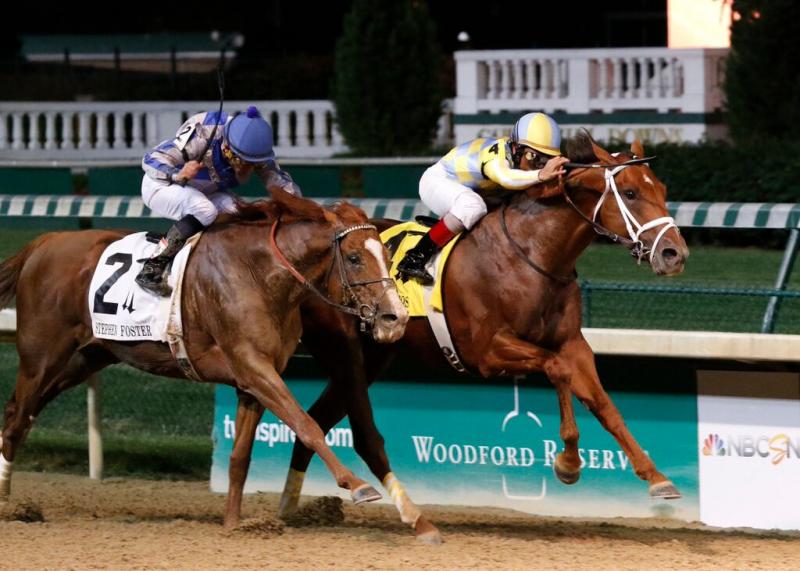 John C. Oxley's Noble Bird, shown (right) in his victory in the 2015 Stephen Foster Handicap (GI), breezed a half-mile in :50.20 Saturday at Churchill Downs. The son of Birdstone is scheduled to run next in Belmont Park's Suburban (GII) on July 9 at Belmont Park. (Churchill Downs) 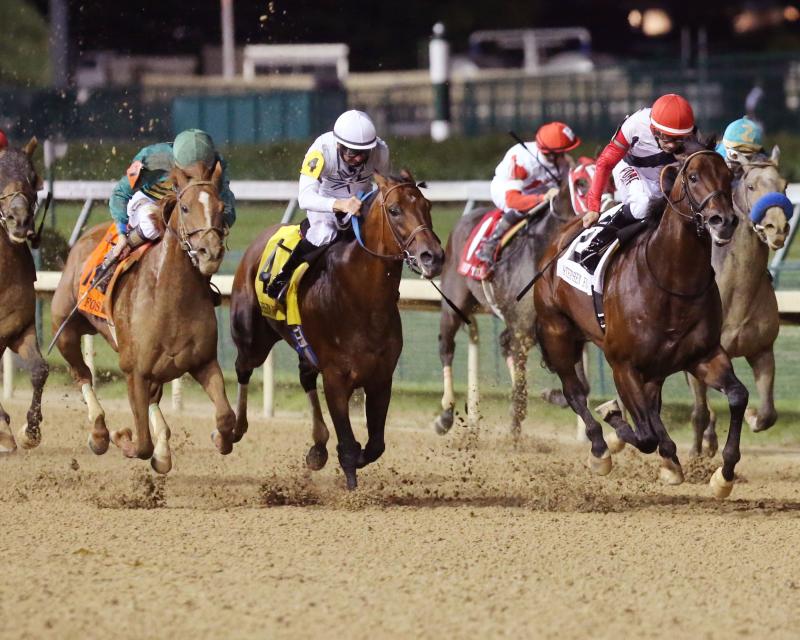 The Dale Romans-trained duo of Brody’s Cause and Cherry Wine are back to work since finishing sixth and seventh, respectively, in the June 11 Belmont Stakes (Grade I) as both breezed a half-mile Saturday at Churchill Downs.

A homebred son of Giant’s Causeway who competes for Albaugh Family Stable, Brody’s Cause went a half-mile in :50.20 while recording fractions of :12.60 and :37.60 before galloping out five furlongs in 1:03.60.

Meanwhile, William Pacella and Frank L. Jones Jr.'s Preakness (GI) runner-up Cherry Wine fired a bullet work in :47 – the fastest of 77 works at four furlongs. Breaking from the three-eighths pole, Churchill Downs clockers caught the son of Tapit in an opening quarter mile of :23.60 and he galloped out in :59.80.

“They both worked well,” Romans said. “I don’t know where we’re going to run, but I plan on getting quite a few races in them here in next few months.”

The $1 million Haskell Invitational (GI) at Monmouth Park on July 31 and $600,000 Jim Dandy (GII) at Saratoga on July 30 are options for both horses. Cherry Wine, however, could return to action sooner in the $500,000 Indiana Derby (GII) at Indiana Grand Race Course on July 16.

“It’s possible,” Romans said. “We’re going to look at how the Indiana Derby comes up and go from there.”

In four starts this year, Brody’s Cause has made one trip to the winner’s circle in Keeneland’s Toyota Blue Grass Stakes (GI) on April 9, which was followed by a seventh-place effort in the Kentucky Derby Presented by Yum! Brands (GI). Cherry Wine’s late-closing second behind Exaggerator in the May 21 Preakness Stakes (GI) has been the highlight of his 3-year-old campaign, which began with a six-length allowance victory at Gulfstream Park on Jan. 9.

Churchill Downs clockers caught the son of Birdstone in splits of :24.80 and :37.40 before he galloped out five furlongs in 1:03.

“He’s coming in the right way and he’s training well,” trainer Mark Casse’s son and assistant Norman said. “I like the way the race sets up for him.”

Noble Bird’s last effort was a sixth-place finish in Belmont’s Metropolitan Handicap (GI) where he was 18 ¼ lengths behind eventual winner Frosted.

“He didn’t look too comfortable,” Casse said of his most recent start. “He seems like a kind of horse that likes to go and then you let him free run the majority of the race. (The Suburban) is a race that’s worth a lot of money. I’m confident in our horse though. I think those long distance races where he can go out and be comfortable early on in the race are going to suit him a lot better than when we rested him off of the speed in the Met Mile.”

“We’re doing this because we’re going to give him a break after that and he won’t run again until the fall,” Howard said. “Fitness is not a question with him. I think losing ground in the Foster didn’t help, but the winner did run a good race.”

Following an extended rest for the remainder of the summer, Eagle is possible to return in Churchill Downs’ $175,000 Lukas Classic in September.

The Suburban also is likely to attract Tri-Bone Stable’s Effinex, who was a disappointing fifth in the Stephen Foster as the 3-5 post-time favorite.

$716,447 SINGLE 6 JACKPOT CARRYOVER FOR CLOSING NIGHT – A colossal total Single 6 Jackpot pool of at least $3 million is expected to be up for grabs tonight at Churchill Downs – closing night of the Louisville track’s 38-day Spring Meet.

Because it’s closing night, there will be a mandatory payout in the Single 6 Jackpot with all monies distributed to ticket holders with the most winners in the six-race series. The Single 6 Jackpot, which only costs 20 cents per combination, will cover Races 4-9 starting at approximately 7:26 p.m. (all times Eastern).

“I wouldn’t be surprised if we get $3 million in new money alone,” said Rick Smith, Churchill Downs’ Senior Director of Mutuels. “Generally speaking, bettors have been investing anywhere from six-to-10 times the number of the carryover into this type of jackpot wager around the country when there is a mandatory payoff so it could exceed that easily.”

Since May 13, the daily six-race sequence has challenged bettors to select the winners of six consecutive races but the Jackpot pool only is paid if there is a single winning ticket. When multiple tickets contain six winners – which has been the case for each of the last 30 race days – 90 percent of that day’s pool is paid out and 10 percent is added to the Jackpot carryover.

Takeout on the Single 6 Jackpot is just 15 percent, which is one of the lowest multi-race wager takeout rates in American racing.

‘DOWNS AFTER DARK’ DETAILS – Tonight’s 11-race closing night card is billed as “Downs After Dark Presented by Stella Artois and Jack Daniel’s.” Admission gates open at 5 p.m. (all times Eastern), the first race is 6 p.m. and the “Downs After Dark” theme is “My Country ’Tis of Thee” in which guests are encouraged dress in their finest red, white and blue to celebrate the Fourth of July holiday weekend and enjoy draft beer, specialty cocktails, BBQ, food trucks, “Bet or No Bet Presented by Thorntons” and live music by local country band Wildwood.

General admission is $10 and reserved seats start at $25. Seating in the Courtyard is available for $69 and Winner’s Circle Suites for groups of 18-20 are also available. Also, special pricing is available to active duty military and veterans who present a valid military ID. Members of those groups will receive 50 percent off of general admission and box seating for up to six.

WORK TAB – John C. Oxley’s Airoforce, runner-up behind stable mate Catch a Glimpse in the Penn Mile (GIII) on June 4 last time out, went a half-mile in :50 in preparation for the $1.25 million Belmont Derby Invitational (GI) on July 9 for trainer Mark Casse. … Klaravich Stables Inc. and William H. Lawrence’s Paid Up Subscriber recorded her first serious work since an upset victory in the Fleur de Lis Handicap (GII) on June 18. The daughter of Candy Ride went a half-mile in :50.60 and will target the $750,000 Delaware Handicap (GI) at Delaware Park on July 16, according to trainer Al Stall, Jr. … Richard and Bertram Klein’s Cash Control, winner of the Old Forester Mint Julep (GIII) on June 11, went five furlongs in 1:00.80 for trainer Brad Cox, who plans on sending the daughter of Pioneerof the Nile to Indiana Grand for the $100,000 Indiana General Assembly Distaff on July 16.

DOWN THE STRETCH – With only one day left of the 2016 Spring Meet, trainers Mike Maker and Mark Casse are tied atop the leading trainer standings with 19 wins apiece. … Casse is attempting to land his first Churchill Downs training title since the 1988 Spring Meet. He has five horses entered in four races on closing night: Top of the Game (Race 2, 5-2), Classic Empire (Race 7, 4-1), Pretty City Dancer (Race 8, 4-1), Havana Dream (Race 9, 6-1) and Moonlight Sky (Race 9, 10-1). … Maker is a five-time Churchill Downs leading trainer, and also has four horses entered in three races: Run Time (Race 5, 12-1), Tacola (Race 5, 15-1), Sail Maker (Race 6, 8-1) and Walking the Kitten (Race 9, 3-1). … Jockey Corey Lanerie and owners Ken and Sarah Ramsey will be honored for their Spring Meet titles immediately after Race 2 on Saturday night in the G.H. Mumm’s Winner’s Circle. Lanerie has won 11 of the last 12 Churchill Downs riding titles. The Ramseys collected their record-extending 26th local crown. 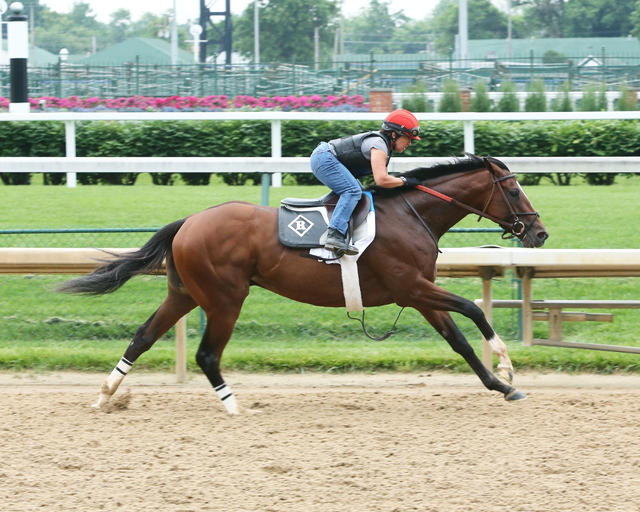