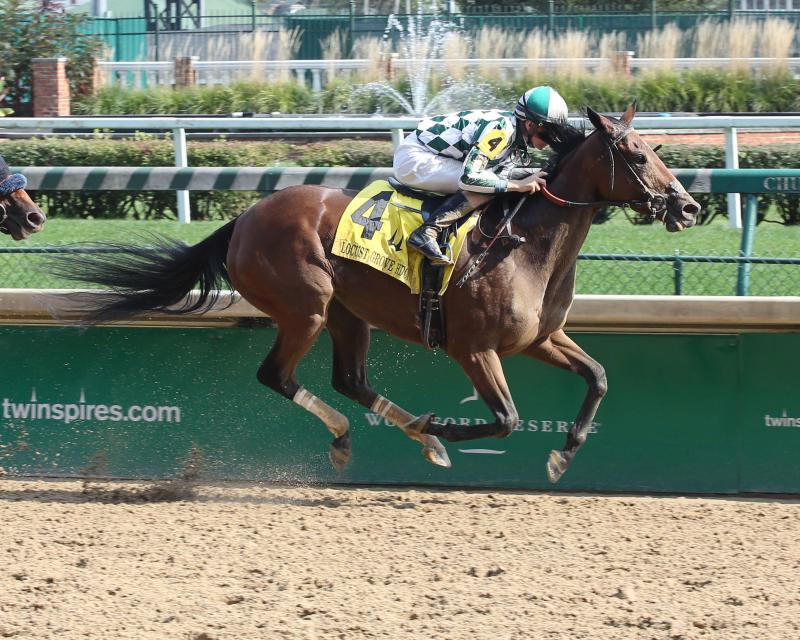 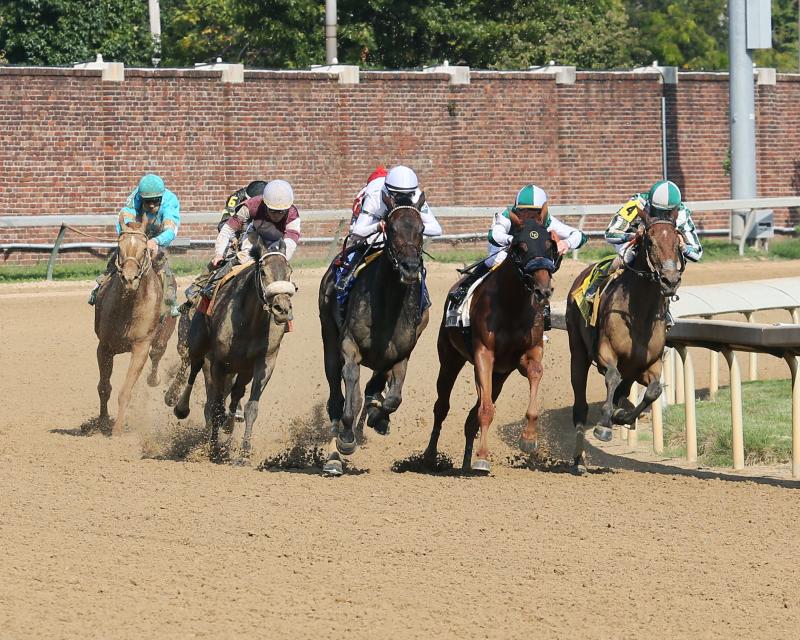 Romantic Vision (right) shot through an opening on the rail under Brian Hernandez Jr. on her way to earning her first stakes victory in the $100,000 Locust Grove (GIII) at Churchill Downs. (Coady Photography, Churchill Downs) 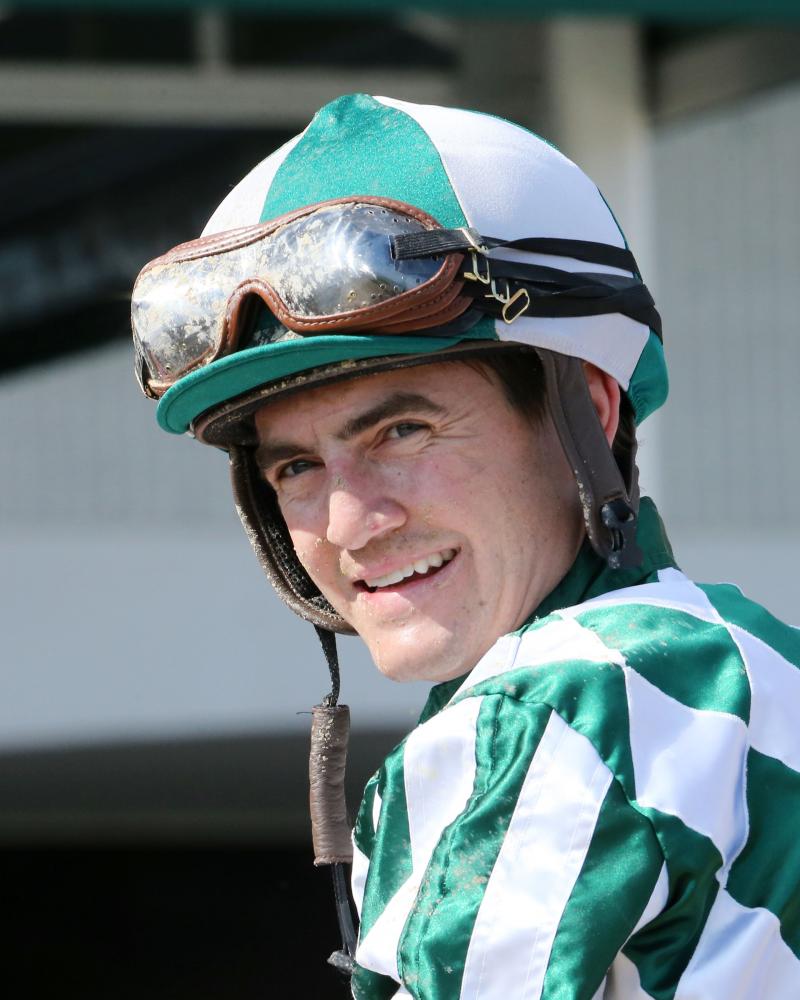 “Brian gets along with her so well and it really showed today,” Arnold said. “He gave her a great trip up the rail and we really couldn’t have asked for anything more.”

Breaking from post No. 4 in the field of seven fillies and mares, Romantic Vision sat just off the uncontested pacesetter Brooklynsway, who led the field of seven through quarter-mile fractions of :24.22 and 48.93. Hernandez had Romantic Vision positioned along the rail when Brooklynsway began to fade and 3-2 favorite Blue Prize (ARG) took over around the far turn clocking six furlongs in 1:13.60. Romantic Vision cut the corner running, grabbed the lead with an eighth of a mile to run and held the favorite at bay to win by 1 ¼ lengths.

“We just got a dream trip behind the speed,” Hernandez said. “When the rail opened up she just responded perfectly and ran on well.”

Romantic Vision, a 5-year-old Kentucky-bred daughter of Lemon Drop Kid by the Giant’s Causeway mare Perfect for You, returned $23.60, $8.80 and $5.40 as the second longest shot in the field. Blue Prize (ARG), ridden by James Graham, returned $3.40 and $2.60 with Tiger Moth finishing another three-quarters of a length back in third under Corey Lanerie and paying $2.60 to show.

This was the second Locust Grove victory for Humphrey, who won the 2015 renewal with Frivolous.

BRIAN HERNANDEZ JR., jockey of ROMANTIC VISION (winner): “We just got a dream trip behind the speed. When the rail opened up she just responded perfectly and ran on well. When I rode her in the La Troienne (Grade I) she really responded well that day over this racetrack, too.”

RUSTY ARNOLD II, trainer of ROMANTIC VISION (winner): “She essentially fell on her head out of the gate in her last start (Summer Colony Stakes) at Saratoga. Brian (Hernandez Jr.) gets along with her so well and it really showed today and even when he rode her in the past. He gave her a great trip up the rail and we really couldn’t have asked for anything more.”

IGNACIO CORREAS IV, trainer of BLUE PRIZE (ARG) (runner-up): “I think she found herself on the lead sooner than I thought she would. She needed a target and she didn’t have any, but other than that she ran good. She ran her eyeballs out. We’re happy and we’ll send her to the Spinster (GI) (at Keeneland). She keeps getting better.”

JAMES GRAHAM, jockey on BLUE PRIZE (ARG) (runner-up): “I probably waited with her a little too long today, but in hindsight he told me to be patient and I was. The other filly got up the fence in a spot in which no horses have come all day. I was trying to keep in the position she was in and running forward – and she was running. When that filly (Romantic Vision) ran by her she went after her, but she couldn’t get there.”

BRAD COX, trainer of TIGER MOTH (third): “She ran well. There was just not much pace to run at. We kind of knew that going in. I thought Corey (jockey Corey Lanerie) put her in a good position, but it just wasn’t her day. It just didn’t set-up in front of her like she probably needs it to. But actually it was the best race she’s run at Churchill so far. I thought for a while that she didn’t like Churchill, but it wasn’t that. There just wasn’t enough pace.” 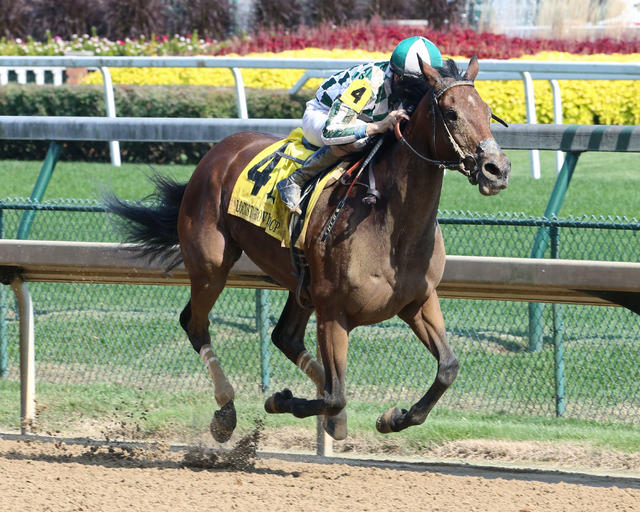