Trained by Ian Wilkes and ridden by Chris Landeros, Ry’s the Guy covered the mile and a half on a fast main track in 2:29.58 to break the track record of 2:30.42 established in this race last year by Sonneteer.

Returning to the main track for the first time since June 2019, Ry’s the Guy dueled with Eskenforit through fractions of :25.09, :49.46, 1:14.79 and 1:39.34. At the head of the lane, Ry’s the Guy put away Eskenforit and then shrugged off a minor challenge from Rated R Superstar to post his first stakes victory.

Ry’s the Guy returned $4, $3 and $2.40. Rated R Superstar, ridden by Martin Garcia, returned $4.20 and $3.20 with Eskenforit finishing another three lengths back in third and paying $4.40 to show under Chantal Sutherland.

Sir Winston and Core Beliefs completed the field in order.

Racing continues Wednesday with a 10-race program beginning at 1 p.m. (all times Eastern) that is headlined by the $150,000 Unbridled Sidney for fillies and mares going 5 ½ furlongs on the Matt Winn Turf Course.

Ian Wilkes (trainer, Ry’s the Guy) – He ran good. I can’t fault anything he did. Chris (Landeros) rode him good. It’s hard to know where you are going to be in races like this, so the main thing I told Chris was to just let him slide down the backside and not push him. He did a perfect job. He let him come off the bridle a bit and that helped him.”

On whether or not the horse will stay on dirt or go back to turf: “I had to change something. He’s a horse that wants to go long, but the turf horses were just getting to him too quick. If I can get some more of these marathon races it may help him.”

Chris Landeros (jockey, Ry’s the Guy) – “Breaking from the inside post, it sort of made us have an easy decision where to put him early in the race. Also, the track has been pretty forward so far today so going out to the lead with this horse was the best plan. He really relaxed well around the track, even with the pressure of (Eskenforit) to the outside for most of the running. He was able to have enough energy to kick home well to hold everyone else at bay. It was a solid effort and good training job by Ian.” 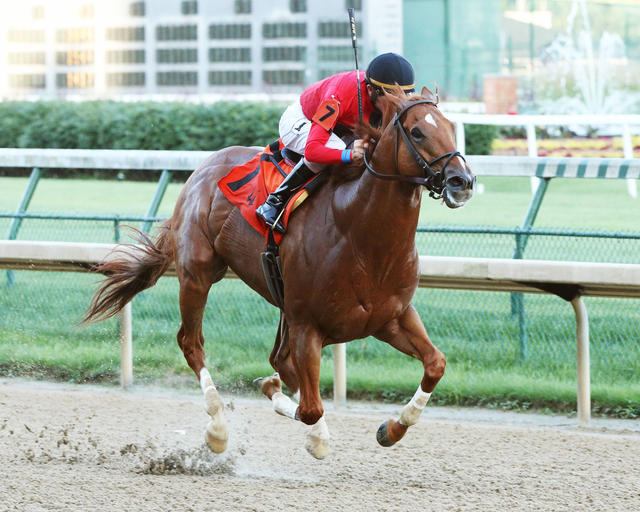