When the Oaklawn Park meet concluded May 2, many of the track’s regular riders moved their tack to Churchill Downs, including the top four finishers: Ricardo Santana Jr., Martin Garcia, Joe Talamo and David Cohen.

Here’s a look at how these jockeys are performing in Churchill’s competitive 26-day spring meet that opened May 16.

With 60 wins, jockey Ricardo Santana earned his seventh riding title at Oaklawn and became the track’s all-time leader for purse earnings by a jockey, numbers that contributed to his current third place in earnings among North American jockeys. Presently, he is the top Oaklawn transplant at Churchill. Santana is two wins behind leader Tyler Gaffalione and one behind Joel Rosario, Corie Lanerie and Johnny Velazquez. Finishing in the top three at 33%, the Panama native rides first call for Hall of Fame trainer Steve Asmussen, and the two pair up for Saturday’s stakes races with Volatile in the Aristides and Magic Dance entered in the Dogwood. In 2019, with a different stakes schedule, Santana had the highest purse earnings at Churchill’s spring meet.

At the beginning of 2020, Martin Garcia and Joe Talamo left southern California to join the Arkansas/Kentucky circuit. The first leg of the move was successful for both riders: they finished second and third, respectively, with 55 and 53 wins. Garcia currently ranks eighth at Churchill, also hitting the board at 33%. Talamo has one win under the TwinSpires but is a top-three finisher at 25%.

David Cohen, Oaklawn’s 2019 leading rider, finished fourth in Hot Springs this year with 44 wins. His main client is trainer Robertino Diodoro, who sends a string to Churchill after winning his first Oaklawn title. The duo picked up two victories opening weekend and added a third their following start before hitting a winless streak. Cohen is finishing in the top three at 14%.

The Churchill roster has been deep, but the standings could open up for the Oaklawn transfers as Belmont resumed racing this week and several jockeys like Jose Ortiz, Joel Rosario and John Velazquez left Kentucky for New York. However, stiff competition remains, like Gaffalione and Lanerie, who won five of the last six spring riding titles. The meet concludes June 27. 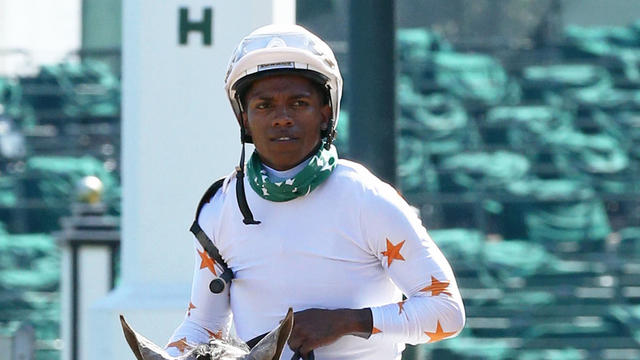