SANTIN PREVAILS IN GRADE I ARLINGTON MILLION AT CHURCHILL DOWNS

Godolphin’s homebred Santin, winner of the $1 million Old Forester Bourbon Turf Classic (Grade I) on Kentucky Derby day, prevailed in a protracted duel over Smooth Like Strait by 1 ¾ lengths to win Saturday’s 39th running of the $1 million Arlington Million (Grade I), which was held for the first time at Churchill Downs.

California-invader Smooth Like Strait set the pace with Santin glued to his right hip through fractions of :23.85, :47.43 and 1:10.64. Leaving the turn, Santin asserted himself, grabbed the lead and did not relinquish the advantage for his Million triumph.

“He’s got some speed and when we saw how the Beverly D. was playing we thought we needed to sit a little closer,” Gaffalione said. “We were in a good spot and around the turn and (Smooth Like Strait) came out a little bit but I had a lot of horse beneath me. In the past we thought he may have underperformed in his races. We know how much talent he has and he showed that in the (Old Forester Bourbon) Turf Classic and here this afternoon in the Million. It’s so special to win this race. Its history speaks for itself and I’m glad we are able to be a part of it.”

Santin is a 4-year-old Kentucky-bred son of Distorted Humor out of the Medaglia d’Oro mare Sentiero Italia. In notching his second Grade I stakes victory of the year at Churchill Downs, Santin improved his record to 4-2-0 in seven starts and increased his earnings to $595,200 with Saturday’s $601,400 check.

“We were able to watch how things played in the Beverly D. and in Santin’s best races he sits a little closer to the pace,” Walsh said. “We decided to make that the game plan. Tyler gave him a beautiful trip. I think the (1 1/8 miles) is as far as he wants to go. He broke his maiden and won his second start at one mile. We found ourselves in several 1 1/8-mile races and have performed admirably. I think the goal is the Breeders’ Cup Mile (GI). We’ve got a couple of options we’ll talk about how to get there.”

Set Piece (GB), who emerged as the 2-1 favorite, was another head back in fourth and was followed in order by Cavalry Charge, Admission Office, Cellist and Field Pass. Megacity was scratched. 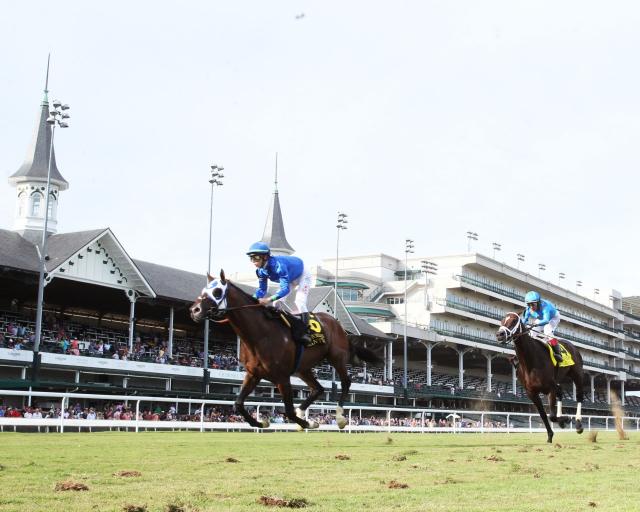