Churchill Downs-based star Seeking the Soul is set to bid for repeat glory over his home track in Friday’s 144th running of the $500,000 Clark Handicap Presented by Norton Healthcare (Grade I), the premier race of the historic track’s Fall Meet.

The 1 1/8-mile Clark heads a duo of stakes races on the 12-race “Black Friday” card on the day after Thanksgiving that is traditionally the most popular racing day of Churchill Downs’ Fall Meet. The main event is scheduled as the 11th race on the Friday program at 5:56 p.m. (all times Eastern) that also features the 28th running of the $200,000 Mrs. Revere (GII) for 3-year-old fillies on turf. Post time for Friday’s first race is 1 p.m.

Seeking the Soul, owned by Charles Fipke and trained by leading conditioner Dallas Stewart, most recently finished second to City of Light in the Nov. 3 Breeders’ Cup Dirt Mile (GI) at Churchill Downs, his fifth start of 2018.

“He’s just getting better as the year goes on,” Stewart said. “Similar to his campaign last year when he won the Clark, he was peaking during this time. I would’ve liked to him to have had a shot to run in the (Breeders’ Cup) Classic but it is what it is. Hopefully he runs well in the Clark and he can get another shot at the ($9 million) Pegasus (World Cup Invitational at Gulfstream Park) in January.”

A 5-year-old homebred son of Fipke’s prized stallion Perfect Soul (IRE), Seeking the Soul survived a jockey’s objection in last year’s running of the Clark Handicap after the rider of third-placed Hoppertunity, Florent Geroux, claimed Hall of Fame rider John Velazquez interfered in the late stretch run. After review from the stewards, the claim was disallowed and Seeking the Soul’s half-length win stood as is.

Following the Clark, Seeking the Soul was entered in the $16 million Pegasus World Cup (GI) at Gulfstream Park but finished a disappointing fifth.

Among the formidable rivals to Seeking the Soul in the Clark is Steve Landers Racing’s Fayette Stakes (GII) winner Leofric (13-7-1-3—$650,340) for trainer Brad Cox. The gray son of Candy Ride (ARG) is in search of his first Grade I victory for the Louisville-based conditioner.

Leofric’s 2018 campaign began at Oaklawn Park in early January with a narrow victory in a non-winners of three allowance race. The 5-year-old Kentucky-bred tried stakes company in his next start, the Razorback Handicap (GIII), but finished second to fellow Clark rival Hawaakom. The seven-time winner is poised to close the year with a bang following a victory in the West Virginia Governors Cup (GIII) at Mountaineer and a third-place effort in the Woodward (GI) prior to his Fayette score. Cox’s regular rider Geroux, who won the 2016 Clark Handicap aboard eventual 2017 Horse of the Year Gun Runner, has the return call and drew post 5 with a 121-pound assignment.

Breaking just outside of Leofric is the ultra-consistent 3-year-old Bravazo (15-3-3-3—$1,206,528) for Hall of Fame trainer D. Wayne Lukas and Calumet Farm. The Awesome Again colt will attempt to give Lukas a record-tying third win in the race after previously winning with Will Take Charge (2013) and Surfside (2000). Both of Lukas’ previous winners were 3-year-olds that cemented year-end divisional championship honors.

Bravazo has competed in many of the top races in 2018, including all three legs of the Triple Crown, the Haskell (GI), Travers (GI) and Breeders’ Cup Dirt Mile (GI). Most notably, Bravazo finished second in the Preakness (GI) behind eventual Triple Crown winner Justify and third, 2 ½ lengths behind Seeking the Soul, in the Breeders’ Cup Dirt Mile.

The three-time winner will have the riding services of Joel Rosario at 118 pounds in the Clark Handicap.

Invading from the West Coast for the Clark is DP Racing’s Prime Attraction (19-4-4-2—$499,545), who led nearly every step of the 1 1/8-mile journey in the Fayette before Leofric surged for a narrow victory. Trained by James Cassidy, Prime Attraction remained in Kentucky following the Fayette with his son, Christopher. The 5-year-old by Unbridled’s Song was banging heads with eventual Breeders’ Cup Classic (GI) winner Accelerate in the Pacific Classic (GI) and Awesome Again (GI) before shipping east to Keeneland in October. Regular rider Kent Desormeaux has the call on the four-time winner and drew the rail with a 120-pound weight assignment.

Like the Kentucky Derby presented by Woodford Reserve (GI) and the Longines Kentucky Oaks (GI), the Clark Handicap was run for the first time in 1875’s inaugural racing meet at Churchill Downs, which was then known as the Louisville Jockey Club. The Clark, the Derby and the Oaks have been run each year without interruption since their debuts. 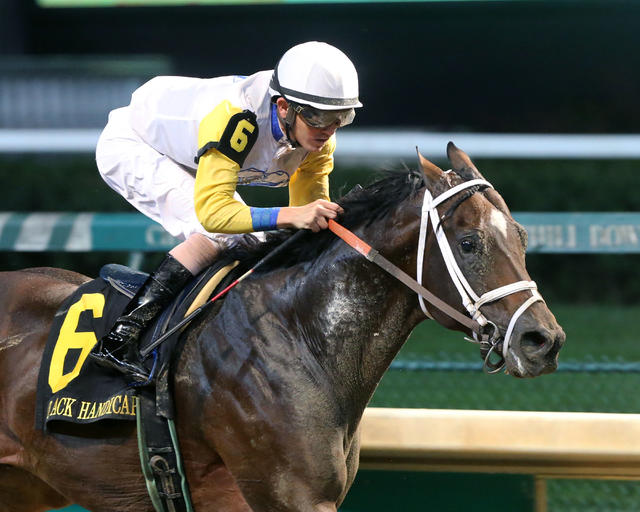