LOUISVILLE, KY (Friday, May 3, 2019) – Joel Politi’s Serengeti Empress grabbed the advantage out of the gate and repelled a stretch bid from Liora by 1 ¾ lengths to win the 145th running of the $1.25 million Longines Kentucky Oaks (GI) for 3-year-old fillies before a crowd of 105,719 at Churchill Downs.

Trained by Tom Amoss and ridden by Jose Ortiz, Serengeti Empress covered the mile and one-eighth on a fast track in 1:50.17. It is the first victory in the race for Amoss and Ortiz.

Ortiz, who will ride Tacitus in Saturday’s Kentucky Derby, has a chance to become the eighth rider to sweep the Oaks and Derby in the same year with Calvin Borel being the most recent in 2009 with Rachel Alexandra and Mine That Bird.

Winner of the Pocahontas (GII) here last September in front-running fashion, Serengeti Empress went right to the front with Motion Emotion in closest pursuit. Serengeti Empress clicked off fractions of :23.25, :46.65 and 1:11.26 and maintained a daylight advantage into the stretch.

Only Liora, sent off at 38-1, threatened the winner in the final run through the lane, closing to within a length at the eighth pole but getting no closer.

Serengeti Empress is a Kentucky-bred daughter of Alternation out of the Bernardini mare Havisham.

Serengeti Empress returned $28, $14.80 and $9.60. Liora, ridden by Channing Hill, returned $32.60 and $17 with Lady Apple finishing another 5 ½ lengths back in third under Ricardo Santana Jr. and paying $7 to show in finishing a neck in front of Champagne Anyone.

Jaywalk was disqualified from sixth and placed 13th for interfering with Positive Spirit out of the gate. 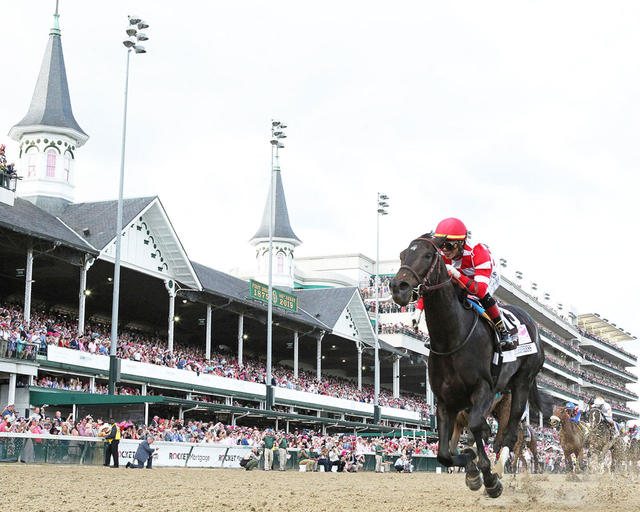