Sharing Much The Best In Winning Edgewood

LOUISVILLE, KY (Friday, Sept. 4, 2020) – Eclipse Thoroughbred Partners and Gainesway Stable’s Sharing grabbed the lead in upper stretch and fended off a late bid by Hendy Woods to score by 1 ¼ lengths in the 36th running of the $300,000 Edgewood Presented by Forcht Bank (GII) for 3-year-old fillies.

Trained by Graham Motion and ridden by Manny Franco, Sharing covered the mile on a Matt Winn Turf Course rated as good in 1:36.87.

Sharing is a Maryland-bred daughter of Speightstown out of the Pleasantly Perfect mare Shared Account.

It was another length back to In Good Spirits who was followed in order by Pranked, Walk In Marrakesh (IRE) and Mariafoot (FR).

Manny Franco (winning rider, Sharing) -- “She has tactical speed. She broke out of there good and put me in a position where I wanted to go. After that, she knows how to get it done. She is so nice and has a really good turn of foot. She is very professional.”

Graham Motion (winning trainer, Sharing) -- “I can’t lie, I was pretty anxious about it because she was coming off a long trip and a long break. But she’s so classy, she makes us all look good I think. She had a great work last weekend and Manny (Franco) gave her a perfect ride. It couldn’t have set up any better quite honestly.

“I figured she probably would be (a little fresh). The last thing I said was just tell Manny to keep her settled. She hasn’t run for a while so it’s not surprising but she’s never overly anxious. She’s such a pro.

“The only question I have in my mind is how far she wants to go. She obviously loves this distance. The next race would be 1 1/8 miles if we go to the QE2 at Keeneland. I don’t know if she wants to go that far, I don’t know why she wouldn’t, but she seems awfully good going a mile. I think the QE2 is a race anyone with a good 3-year-old filly wants to go. I’m so tickled to get a race under her now because this makes it easier going forward now we’ve got this level of fitness. And I can’t say enough about working with Aron (Wellman) and Antony (Beck). I feel like we’ve called the right shots and it’s because of them, they’ve never put any pressure on me.”

John Velazquez (rider, Hendy Woods, second) – "She ran really well. She's looking at the infield and everything. She's not kind of settled behind the horses there. But finally she got settled on the second turn. I made a run with her. A good horse beat her today."

Mark Casse (trainer, Hendy Woods, second) – “Very pleased. I want to talk to (jockey) Johnny (Velazquez) because twice he checked her and fell back in the saddle. I don’t know if that cost us anything but definitely when you run against a filly like that (Sharing) and run second, there is no shame.”

Declan Cannon (rider, Lucky Betty, third) -- “She kind of was not liking the soft ground, but I got in behind Sharing down the back and she made one run. She tried hard. I wish it was harder ground because she may have gotten a lot closer to Sharing, but my hat’s off to the winner. She’s the best in the country right now.” 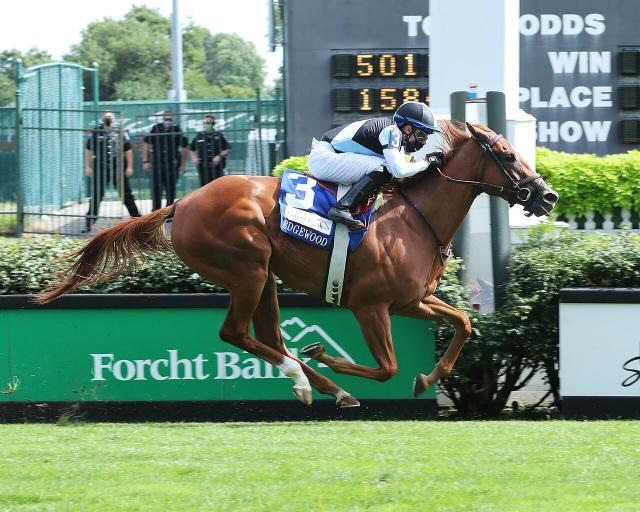