LOUISVILLE, Ky. (Saturday, Sept. 5, 2020) – It was a thrilling Friday for the team of Brad Cox and Florent Geroux as the duo teamed up for their second Longines Kentucky Oaks (Grade I) victory in the last three years with Qatar Racing, Flurry Racing and Big Aut Farm’s Shedaresthedevil.

“It was such an unbelievable day,” Cox said. “This filly has a ton of heart and Flo gave her the perfect ride.”

Cox had an eerily similar morning Saturday as he did in 2018 following Monomoy Girl’s Kentucky Oaks victory. The Louisville native continued his regular routine with 10 of his horses recording published workouts.

“It’s the life of a trainer,” Cox said. “Horses like Monomoy Girl and Shedaresthedevil make this job all worth it.”

SWISS SKYDIVER – Trainer Kenny McPeek reported that “all is good” with Peter J. Callahan’s Kentucky Oaks runner up Swiss Skydiver despite exiting the race with a few cuts on a front ankle. Next race plans are “undecided” for the multiple stakes winner as of Saturday morning, according to McPeek.

Following the race, the trainer made a case for bringing the stallion Daredevil, who was sold to Turkey late last year, back to the U.S., noting he sired both Swiss Skydiver and the Oaks winner Shedaresthedevil.

“They need to get him back here,” McPeek said. “He’s a good stallion.”

GAMINE – Hall of Fame trainer Bob Baffert reported that Michael Lund Petersen’s Gamine “looked great” and was in good order the morning after finishing third as the favorite in the 146th edition of the Longines Kentucky Oaks.

Gamine set the pace in the 1 1/8-miles Oaks before being collared in the stretch by winner Shedaresthedevil and runner-up Swiss Skydiver. The loss marked the first time the daughter of Into Mischief had been beaten on the square in her five career starts as her only prior blemish was a loss via disqualification for a medication overage at Oaklawn Park.

“She had a tough trip all the way around,” McCarthy said of Speech, who finished fourth. “She got bumped at the break by Gamine and hit at the 7 ½ pole by Donna Veloce and checked by Donna Veloce at the six-furlong pole. She never got a chance to run her race.”

“I thought she ran a great race,” Stewart said.

BAYERNESS – Belladonna Racing’s Bayerness was back at Trackside Louisville – Churchill Downs’ training facility – Saturday morning. Her next race plans are still to be announced.

HOPEFUL GROWTH – Trainer Anthony Margotta reported via text message that his St. Elias Stable’s Monmouth Oaks (GIII) winner Hopeful Growth, sixth in the Oaks, came out of the race in good shape and would be leaving to go back to her Monmouth Park base at 5 p.m. Saturday.

“She came back good,” said Carlos Santamaria, assistant to trainer Simon Callaghan. “We will try to get her as good as we can for the Breeders’ Cup.

Making her first start in six months, Donna Veloce “had a lot of problems” in the race Santamaria said.

“Out of the gate, the five (Gamine) came in and hit the four (Speech) and she hit us,” Santamaria said. “She dropped the bit and ran off going into the first turn. He (jockey Ricardo Santana Jr.) took her to the outside to get her settled and going down the backside he could feel the field pushing him further outside. He ended up being wide all the way around.”

“She came out of the race OK,” trainer Matthew Williams said of Dream Marie, who trailed the field throughout. “We were hoping for a better result, but it was still a great experience.” 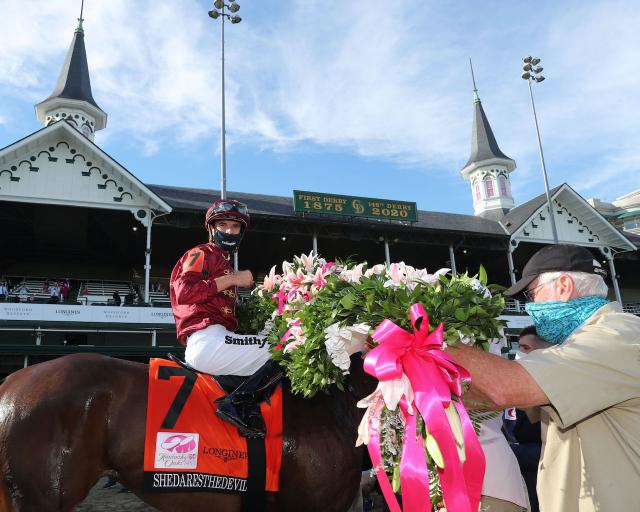