On a soggy Friday morning beneath the historic Twin Spires, nine Breeders’ Cup contenders completed their major preparation for the World Championships on Nov. 2-3 at Churchill Downs.

MIND YOUR BISCUITS TUNES UP FOR THE CLASSIC – Trainer Chad Summers’ top Breeders’ Cup Classic (GI) contender Mind Your Biscuits completed what appeared to be his final major preparation for the $6 million test with an easy five-furlong move in 1:03.20 early Friday morning at Churchill Downs.

“It was a two-minute lick,” Summers said. “We’re really happy with how he’s doing and how he went this morning.”

Mind Your Biscuits, the winner of the Lukas Classic (GIII) on Sept. 29 at Churchill Downs and multiple Grade I-winning sprinter, has pre-entered in both the Classic and TwinSpires Sprint (GI).

“I actually originally pre-entered in the Classic and Dirt Mile,” Summers said. “However, once I heard X Y Jet was coming for the Sprint, I changed my pre-entry at 11:50 a.m. on Monday (deadline was noon).”

Tyler Gaffalione, a new addition to the Churchill Downs jockey colony, has the call on Mind Your Biscuits in the Breeders’ Cup.

SEEKING THE SOUL WORKS HALF-MILE IN :47.60, STEWART HOPES TO SNEAK INTO CLASSIC – Currently on the outside of the Breeders’ Cup Classic (GI) field looking in is locally based trainer Dallas Stewart’s Ack Ack (GIII) winner Seeking the Soul who worked a half-mile in :47.60 Friday morning at Churchill Downs.

“It seems we have some luck sneaking into races when we are on the outside looking in,” said Stewart, who finished second in the Kentucky Derby in 2013-14 with Golden Soul and Commanding Curve. “One thing we know for certain is that this horses loves this track. If we can’t get into the Classic, then we can run in the Dirt Mile. I think he’ll do great in either spot.”

Currently, Seeking the Soul is ranked No. 17 on the Breeders’ Cup preference list for the Classic, that is limited to 14 starters.

The winner of the Grade I Clark Handicap last November worked Friday through opening splits of :11.60 and :23.20, before galloping out five furlongs in 1:00.60, according to Churchill Downs Clocker John Nichols. The work was ranked the third fastest out of 26 at the distance over the “good” dirt surface.

WHITMORE BLITZES HALF-MILE IN :46.20 FOR TWINSPIRES BREEDERS’ CUP SPRINT – Trainer Ron Moquett’s crack sprinter Whitmore was the first horse onto the Churchill Downs racetrack Friday at 5:20 a.m. EDT and breezed a :46.20 half-mile inside of stablemate Meanbone in preparation for the TwinSpires Breeders’ Cup Sprint (GI).

The 5-year-old chestnut gelding by Pleasantly Perfect was most recently the runner-up in the Phoenix Stakes (GII) at Keeneland behind Promises Fulfilled.

“He went a little faster than I wanted him to, but the track is a little quick,” trainer Bret Calhoun said of the work that was accomplished at 6 o’clock, well before a soaking rain turned the track to “sloppy” later in the morning.

“He did it very easy; nice and relaxed. He squeezed him a little at the sixteenth pole to finish and he galloped out well.”

“He won going two turns here and I think that is an advantage,” Calhoun said.

Calhoun also said that Carl R. Moore Management’s Finley’sluckycharm came out of her half-mile work of :47.80 on Thursday fine. Finley’sluckycharm, a winner of 6-of-7 starts at Churchill Downs, is pre-entered in the $1 million Breeders’ Cup Filly & Mare Sprint (GI).

Indian Summer Stakes runner-up Chelsea Cloisters, who is No. 13 on the preference list for the Juvenile Turf Sprint that is limited to 12 starters, began her breeze one length behind Shang Shang Shang and finished two lengths in front at the wire through splits of :13.80 and :26.80, according to Nichols.

“I think she liked the soft turf,” said jockey Tyler Gaffalione, who was aboard Chelsea Cloisters. “It was a really good work.”

Veteran rider Aaron Gryder was aboard Florida-bred Shang Shang Shang who is undefeated in two career starts including a victory at Royal Ascot in the Norfolk Stakes (GII).

Eclipse Thoroughbred Partners’ Pakhet, runner-up in the Jessamine (GII) at Keeneland in her most recent start, worked a half-mile on the yielding turf course in :51.40 with exercise rider Juan Bernardini up, in preparation for the $1 million Juvenile Fillies Turf (GI).

“It looked like she handled it well,” said Ginny DePasquale, assistant to trainer Todd Pletcher. “Todd wanted to go easy.”

The remainder of Pletcher’s eight-horse Breeders’ Cup contingent is scheduled to arrive Monday.

Working just ahead of Pakhet was August Dawn Farm’s Forty Under, winner of the Pilgrim (GIII) at Belmont in his most recent start for trainer Jeremiah Englehart.

“I brought him down early to get a work over the course,” Englehart said. “I am glad they opened it up today, a week before the race, and that is perfect for us. He started off a little slow but that was fine and he finished up well.”

Now 2-for-2 on the grass, Forty Under will be ridden in the $1 million Breeders’ Cup Juvenile Turf (GI) by Manny Franco.

ADDITIONAL BREEDERS’ CUP NEWS AND NOTES – Trainer Tom Amoss said his two Breeders’ Cup pre-entrants were fine Friday morning following half-mile works in :48.20 on Thursday. “They will go back to the track in the morning,” Amoss said of Joel Politi’s Serengeti Express (Tito’s Handmade Vodka Breeders’ Cup Juvenile Fillies-GI) and G M B Racing’s Lone Sailor (Classic/Dirt Mile-GI). “The owners are meeting tonight (about which race Lone Sailor will run in).” … Trainer Kathleen O’Connell’s duo of Stormy Embrace (Filly & Mare Sprint) and Well Defined (Juvenile) have arrived at Churchill Downs from Florida and are based in Barn 39. … A flight from California carrying several Breeders’ Cup contenders has arrived in Lexington. The horses vanned to Churchill Downs and were expected to arrive at noon. The contenders on the Kalitta Charters flight were: Anonymity (Filly & Mare Sprint, trainer Richard Mandella); Bellafina (Juvenile Fillies, Simon Callaghan); La Force (Longines Distaff, Paddy Gallagher); and Miss Sunset (Filly & Mare Sprint, Jeff Bonde). Also on the flight was Hall of Fame trainer Bob Baffert’s Rags to Riches contender Mother Mother, who will be stabled in D. Wayne Lukas’ Barn 44. … A flight carrying superstar filly Enable along with 21 other European Breeders’ Cup contenders is expected to arrive at Churchill Downs at 11:45 p.m. Friday, according to Churchill Downs

BARN LIST – All Breeders’ Cup contenders must be on the grounds 72 hours prior to their race. Many of the contenders will arrive over the weekend. Check for updates regarding arrivals via Twitter from @DerbyMedia.


Below are the current Breeders’ Cup contenders that are currently stabled at Churchill Downs: 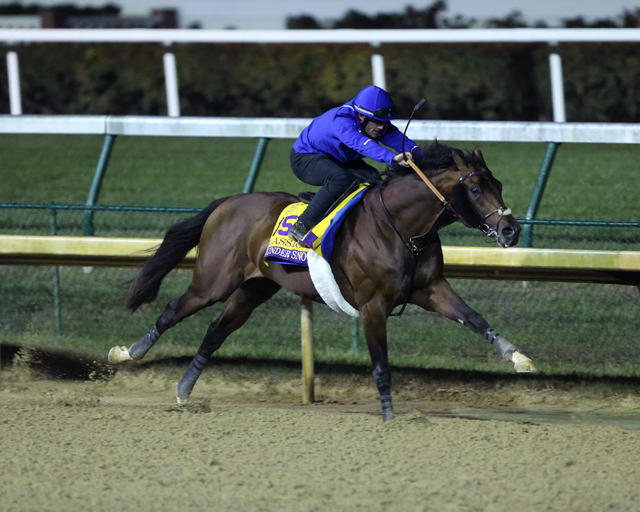