Thanksgiving’s renewal of the Falls City is scheduled as Race 9 on a 12-race program that begins with a special first race post time of 11:30 a.m. (all times EST). The Falls City shares the holiday racing spotlight with the 46th running of the $175,000 Cardinal (GIII) for fillies and mares 3-year-olds and up at 1 1/8 miles on the Matt Winn Turf Course. The Falls City has a scheduled post time of 3:24 p.m., while the Cardinal is set for 4:22 p.m.

Sally’s Curlin (9-4-0-3—$287,196), trained by Churchill Downs’ all-time leading trainer Dale Romans, rallied strongly from off the pace to win the Chilukki four weeks ago – the local prep for the Falls City. The 3-year-old daughter of Curlin has recorded three of her four victories over the Churchill Downs surface and will be reunited with leading rider Corey Lanerie for the Falls City and break from post position No. 6.

Among her rivals in the Falls City is Go Google Yourself (17-6-4-3—$462,025), who will ride a two-race win streak into the Falls City. Go Google Yourself skipped the Chilukki and has worked consistently towards the Falls City for trainer Paul McGee. The 4-year-old filly by Into Mischief has been the picture of consistency for most of her career. The only major blemish in her last eight starts was a fourth-place effort behind Breeders’ Cup Classic (GI) contender Elate in the $250,000 Fleur de Lis (GII). Brian Hernandez Jr. has the call on Go Google Yourself from post 9.

The Falls City dates back to the first racing meet in 1875 at the track then known as the Louisville Jockey Club, but unlike the Kentucky Derby Presented by Woodford Reserve (GI), the Longines Kentucky Oaks (GI) and Friday’s Clark Presented by Norton Healthcare (GI) – all of which made their debuts in that first local racing meet and have been run annually since – there have been some gaps in its renewals through the years. Through its history the 1 1/8-mile Falls City has provided a stage for both rising stars and fillies and mares who are preparing to end their racing days and embark on a new career in the breeding shed.

Racing on Thanksgiving Day at Churchill Downs has been a Louisville tradition for 50 years where more than 7,000 turkey dinners are served with all the trimmings, making it the largest number anywhere in the region. 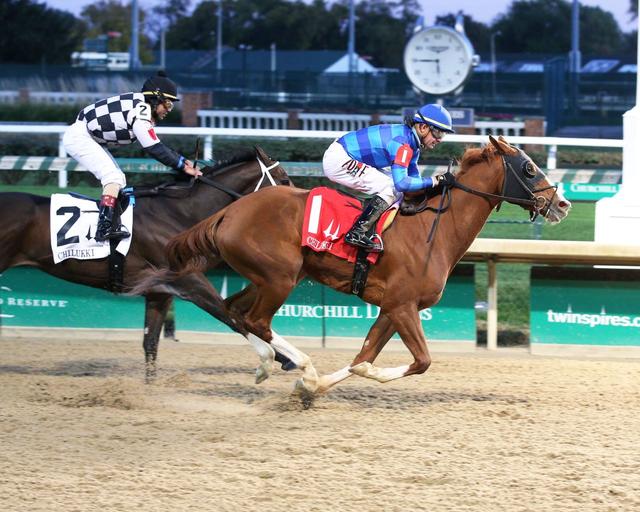