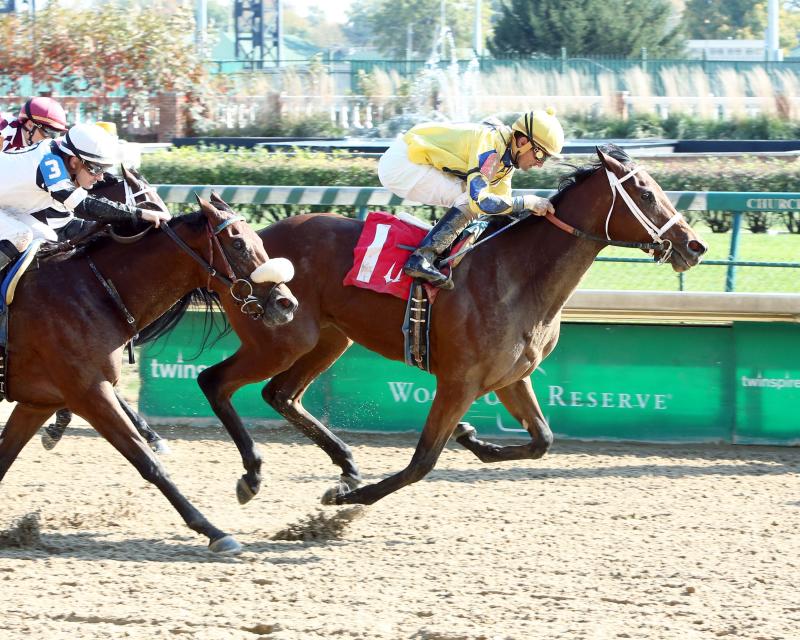 James M. Miller's Lovely Bernadette, winner of the Rags to Riches, is set to step up to graded stakes competition in the Golden Rod (GII) at Churchill Downs on Nov. 26. (Coady Photography, Churchill Downs)

The Ken McPeek-trained Honor Thy Father, who chased Breeders' Cup Juvenile (GI) heroes Classic Empire and Not This Time in his last two starts, is favored in a Thursday allowance/optional claiming race at Churchill Downs. (Coady Photography, Ellis Park)

It was back to work Wednesday morning for Whitham Thoroughbreds LLC’s promising 2-year-old McCraken, who put in his first serious breeze since a 3 ¾-length victory in the $83,470 Street Sense Overnight Stakes on opening day of Churchill Downs’ 21-day Fall Meet.

Ten days after clocking one mile in 1:35.55 in the Street Sense, the son of Ghostzapper breezed a half-mile in :49 on the Churchill Downs main track under regular rider Brian Hernandez Jr. Churchill Downs clockers caught McCraken in splits of :12.80 and :25 and a five-furlong gallop out of 1:01.60.

“He worked well,” said trainer Ian Wilkes. “It was just a maintenance work and we’re happy with the way he went. It looked like he was getting along pretty easily. He usually behaves pretty well in the morning.”

McCraken’s next start is scheduled to come on Thanksgiving weekend in the $200,000 Kentucky Jockey Club (Grade II) on Saturday, Nov. 26. The 1 1/16-mile event on the main track for 2-year-olds is a part of the “Road to the Kentucky Derby” and awards the Top 4 finishers based off of a 10-4-2-1 scale.

Rags to Riches Overnight Stakes winner Lovely Bernadette also breezed Wednesday for Chicago-based trainer Jimmy DiVito. The daughter of Bernardini went five furlongs in 1:00 under Robby Albarado with splites of :12, :24.20 and :36 before galloping out in 1:13.40 and 1:27.60.

Owned by James M. Miller, Lovely Bernadette has won three consecutive races and hopes to extended that to four when she makes her next start in the $200,000 Golden Rod (GII) on Saturday, Nov. 26.

STEWART’S BREEDERS’ CUP CONTINGIENT TO REST FOR REMAINDER OF THE YEAR – Following a game third-place effort behind champion fillies Beholder and Songbird in a memorable edition of Friday’s Breeders’ Cup Distaff (GI) at Santa Anita, Charles E. Fipke’s Forever Unbridled will freshen up for a 5-year-old campaign and get the remainder of the year off, according to trainer Dallas Stewart.

"She ran behind two great fillies with two great trainers. We were just third best,” Stewart said. “She ran hard. It looked like we were going to get there for a second. We all like to win but we’ll just have to accept it. We’re just kind of chilling her out right now and try to repeat next year.”

The daughter of Unbridled’s Song put together a stellar 4-year-old season which included two Grade I victories in the Apple Blossom at Oaklawn Park in April and the Beldame at Belmont Park on Oct. 1.

Tom’s Ready, who was a distant fifth in the Breeders’ Cup Dirt Mile (GI) behind Tamarkuz, also will not race again this year.

All was not lost for Stewart last weekend as he hit the horseman trifecta Friday at Churchill Downs with Louisiana-bred 2-year-old Saint’s Fan ($13.80), who won a $56,596 maiden special weight by 1 ¾ lengths after clocking six furlongs in 1:10.32. Stewart is the breeder, owner and trainer.

"We’re real happy with the way he ran here the other day so we’ll take him down to Louisiana for Champions’ Day,” Stewart said referring to the $100,000 Louisiana Champions Day Juvenile Stakes at Fair Grounds on Dec. 10.

The homebred son of To Honor and Serve seeks his first win since a 9 ¾-length romp when breaking his maiden at Ellis Park on July 8.

“We just feel like he’s a horse that has a lot of talent and so we’re working on getting his mind back,” said trainer Kenny McPeek. “We put him in this easier spot but it should still be a tough race. This will likely be his last race of the season, but we’ll just see what happens.”

Jockey Corey Lanerie, who guided Honor Thy Father to his decisive maiden win, has the mount for Thursday’s race which has a scheduled post time of 5 p.m.

WHO’S THE CHAMP? HANDICAPPING CONTEST RETURNS SUNDAY – The “Who’s the Champ? Handicapping Contest” returns Sunday. Interested participants can enter for $35 ($30 for TSC Elite members) for a chance to win the $1,000 cash voucher first prize by placing mythical $2 win and place bets on Races 3-8. Second place receives a $500 voucher and third place is worth a $200 voucher. The entry fee also includes a meal voucher and official program. Registration takes place between 11:30 a.m. and 1:30 p.m. on the Clubhouse second floor at the top of the Gate 17 escalators. “Who’s the Champ?” also will take place on Sunday, Nov. 20.

SINGLE 6 JACKPOT – There’s a six-day carryover of $17,336 in the 20-cent minimum Single 6 Jackpot for Wednesday, and the sequence covers Races 5-10 starting at 3 p.m. EST. The Single 6 Jackpot, which features a low 15-percent takeout, will be paid out only if there is a single winning wager with six winners placed at the required minimum bet value. If there are multiple winning wagers with six winners in the six-race sequence, 90 percent of the net money wagering into the pool will be paid out, and the remaining 10 percent will carry to the Single 6 Jackpot. If there are no tickets will all six winners, 100 percent of the pool will carry to the Single 6 Jackpot. There will be a mandatory payout on closing day.

DOWN THE STRETCH – Entries for Saturday’s feature, the 13th running of the $100,000 Commonwealth Turf (Grade III) for 3-year-olds at 1 1/16 miles on turf, were taken Wednesday morning. The field was to be drawn early this afternoon. … The first race each day this week is 1 p.m. EST. There are 10-race programs on Wednesday, Thursday and Sunday, and 11-race cards on Friday and Saturday. … Track superintendent Jamie Richardson has the rails on the Matt Winn Turf Course placed in Lane 2, 15-feet off the inside hedge, this week. Turf races were in Lane 1 on opening week. … National Weather Service forecast for Louisville this week: Wednesday, mostly sunny, 58; Thursday, sunny, 63; Friday, sunny, 61; Saturday, sunny, 54; and Sunday, sunny, 60. 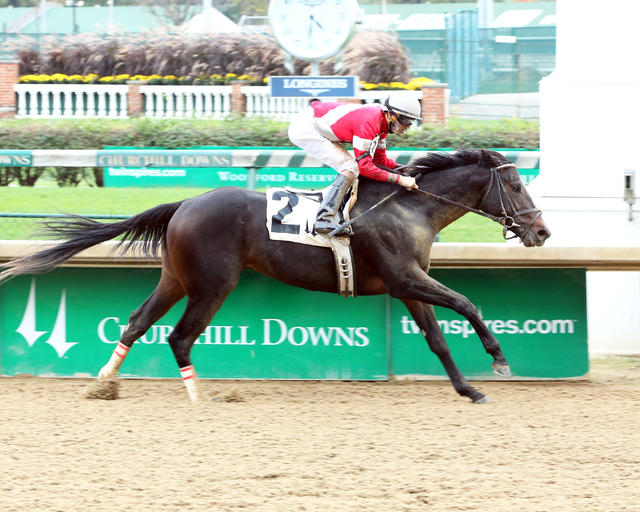