Veteran trainer Dallas Stewart was back to work Sunday at Churchill Downs to figure out the next option for Saturday’s $600,000 Stephen Foster Presented by GE Appliances (Grade II) winner Seeking the Soul.

“We got back at it at 5 a.m. this morning and looking forward to the future,” Stewart said. “He bounced out of the race in great shape and we’ll keep our options open for finding his next target. One thing is for sure, we definitely have a spot in this year’s Breeders’ Cup Classic unlike last year.”

Seeking the Soul originally targeted the 2018 Breeders’ Cup Classic (GI) but did not make the body of the field for the 1 1/8-mile race and had to run in the Breeders’ Cup Dirt Mile (GI). With his victory in the Stephen Foster, Seeking the Soul secured a “Win and You’re In” spot for this year’s Classic on Nov. 2 at Santa Anita.

“East Coast, West Coast, we’re keeping our options open but we know we have a race in November to point towards,” Stewart said.

“It was such a phenomenal night of racing,” said trainer Bret Calhoun, who is targeting the $500,000 Indiana Derby (GIII) on July 13 for Mr. Money’s next start. “We think that (1 1/16-mile) race makes a lot of sense for his next target. We get to keep him at home and don’t ship him around too much.”

Fleur de Lis winner Elate could target the $750,000 Delaware Handicap (GII) at 1 ¼ miles on July 13 as her next start, according to Claiborne Farm’s Walker Hancock. Plans for Wise Dan winner March to the Arch and Regret hero Hard Legacy’s remain in flux.

GETTING TO KNOW MICHELLE LOVELL – In the third part of a weekly series that will run Sundays in the Spring Meet, we get to know jockeys and trainers in their life outside of the racetrack. Each week will feature a different jockey or trainer and today will feature trainer Michelle Lovell.

Lovell began her training career in 2003 following an eight-year stint as a jockey. A native of West Palm Beach, Fla., Lovell has been based at Churchill Downs for 11 years and is typically found training aboard her trusty stable pony Elwood.

Q: What is your favorite thing to do on a day off?

A: I’m really boring. I don’t know what to do on days off so typically if I get some down time I like to sit outside and catch up on all of my busy work that I didn’t get to do at the barn.

Q: What is your go-to order at Starbucks?

A: Almost always it’s a dark roast with the raw sugar.

Q: What is your karaoke song?

A: I’ve never sang karaoke. I like going but I’ve never gotten up to sing. If I had to pick a song it would probably be one from Biggie Smalls or Tupac.

Q: What is your favorite cocktail?

A: I love a good margarita on the rocks. Sometimes, when I’m worried about calories, I’ll just have a cold shot of Patron.

Q: Where is your favorite place to take a vacation?

A: Belize. I’ve been there many times and love it more and more each time.

A: I always order K-11 or, since we go there so often, they named a dish after me called the “Michelle Rolls.”

Q: Who is one horse you wish you could’ve trained?

A: There are so many good horses that I’ve seen throughout my life. The first one that comes to mind would have to be Secretariat.

Q: What is the worst excuse a jockey gave you after a poor ride?

A: “My leg cramped up during the race.”

Q: If you had to give advice to someone who wants to become a trainer, what would it be?

A: You just have to have a lot of persistence, a good work ethic and patience. This job changes all of the time and you’re always learning new things. Keep an open mind and always work hard. I always tell people, “Somedays you’re the chicken and others you’re the feathers.”

DOWN THE STRETCH – A crowd of 19,481 attended Saturday’s Downs After Dark Presented by Budweiser and more than $12.5 million was wagered on the 11-race nighttime card, a 16.8% increase from last year’s $10.7 million. … Entering Sunday’s 10-race program, Brian Hernandez Jr. was six wins away from 600 career Churchill Downs victories while Hall of Fame trainer Steve Asmussen was four wins away from 700 career victories beneath the Twin Spires. … There is a $175,013 carryover in the 20-cent Single 6 Jackpot on Sunday. The sequence will span Races 5-10. … After dark days on Monday, Tuesday and Wednesday, there are only seven days left at the 38-day Spring Meet, which concludes June 29. … Racing is set to continue Thursday for Twilight Thursday presented by Blue Moon. The evening will feature eight races with a post time of 5 p.m. along with $1 Blue Moon drafts, $1 domestic draft beer, food trucks, lawn games, one-on-one expert betting advice and live music on the Plaza Stage from Hora Certa. … Before Thursday’s races begin, Churchill Downs’ jockeys and track officials are scheduled to visit young patients and their families and friends at Louisville’s Norton Children’s Hospital for a 32nd consecutive year. Jockeys are scheduled to depart the track for the hospital at 1 p.m. … The featured race of the week will be Saturday’s 10th running of the $120,000-added Roxelana Overnight Stakes for fillies and mares at six furlongs. Entries will be taken and post positions will be drawn Wednesday. … Prominent stakes action next week includes the prestigious Royal Ascot meeting in England (Tuesday-Saturday); Saturday’s $500,000 Ohio Derby (GIII) at Thistledown; Saturday’s $300,000 United Nations (GI), $150,000 Philip H. Iselin (GIII) and $150,000 Eatontown (GIII) at Monmouth; Saturday’s $100,000 Wilshire (GIII) at Santa Anita; and Sunday’s $100,000 San Juan Capistrano (GIII) on closing day at Santa Anita. … Sunday, June 23 is Family Adventure Day presented by Kroger. There will be more than 20 fun activities for kids under 12 in the Plaza, a family viewing area to watch live racing and special family ticket packages that start at $10 in advance (children under 2 are admitted free). The theme is “Get Outdoors” and families can learn about all that Louisville’s great outdoors has to offer with activities from The Parklands of Floyds Fork, Louisville Parks and Recreation, Kentucky Department of Agriculture and more. Additional event features include stick horse races, a petting zoo, mini pony rides, face painting, bounce houses, an obstacle course, corn hole, a bubble station, as well as a special area for children under 3. For more information or tickets, visit www.ChurchillDowns.com. 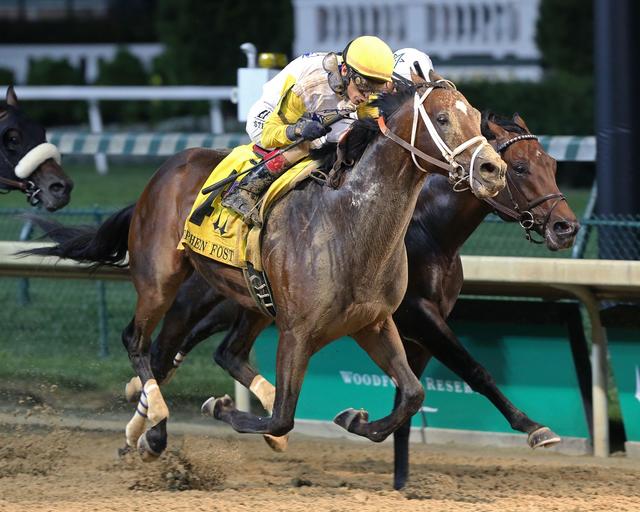