“She was just an incredible filly on the racetrack but she was tough as nails to be around at the barn,” Stewart said. “I remember times where we would be back at the barn and Jeff (Lukas) would have her out grazing and he’d come back to the barn with grass stains on his pants and up his back because she was so strong to handle. Even putting the bridle on her was a chore for us because she was so ready to go at all times.”

Winning Colors was one of only three fillies to win the Kentucky Derby – Regret (1915) and Genuine Risk (1980) are the others – and since her victory in 1988, no other filly has won the race. Her 19-race career spanned just three years but included eight victories and more than $1.5 million in purse earnings. Many recall Winning Colors’ battle with fellow Hall of Famer Personal Ensign in the 1988 Breeders’ Cup Distaff (GI) at Churchill Downs.

“I remember after she finished last in the Spinster, Gary Stevens came back and didn’t feel like something was right with her,” Stewart said. “So, Wayne took her back to Churchill and I started galloping her over the track there. I didn’t feel anything wrong with her and she worked beautifully twice over the track. I think she didn’t like the surface at Keeneland because it was really deep. Then, two weeks later, she had that epic battle in the Breeders’ Cup with Personal Ensign.”

The Winning Colors is the co-featured event on Saturday’s card along with the $100,000 Old Forester Mint Julep (GIII) for fillies and mares at 1 1/16 miles on the turf. The Winning Colors will go as Race 7 while the Mint Julep is carded as Race 11. First post for the 11-race program is 1 p.m.

TWINSPIRES.COM HANDICAPPER SHAPIRO LOOKS AT SATURDAY’S $500,000-GUARANTEED LATE PICK 5 – TwinSpires.com and Churchill Downs simulcast racing analyst Scott Shapiro provided analysis for Saturday’s Late Pick 5 which has a $500,000 guaranteed pool in Races 7-11. Shapiro will discuss his selections Friday at 6 p.m. on “Inside Churchill Down” on ESPN 680/105.7. Those outside the Louisville market can listen online at www.espnlouisville.com.

Race 7: Winning Colors Stakes: This six-furlong dash for fillies and mares looks like a two-horse race on paper. #8 Mia Mischief is the one to beat after a pair of easy victories to start her 5-year-old campaign for Hall of Famer Steve Asmussen. Once again, the Stonestreet Stables mare draws favorably to the outside, which should allow Ricardo Santana, Jr. to work out a clear stalking voyage much like he did last time out in the Carousel Stakes at Oaklawn Park. The daughter of Into Mischief has won five of eight races under the Twin Spires and is tough to play against, but she will have to run down a fast filly in #2 Break Even. The daughter of Country Day put in a clunker to start her 4-year-old season, but looked like her old self-disposing of a field of 10 last time out in Arkansas. Even a razor-sharp Mia Mischief could struggle to run Break Even down in the lane if she can shake loose early.

Race 8: #9 Ashiham makes her first start in Louisville after a runner-up effort going 7-panels at Gulfstream Park in late April. The $800,000 Keeneland Sept. 2018 purchase for Shadwell Stable ran into a good-looking Chad Brown first-time starter in Basquiat in that defeat last month. The Tapit colt should appreciate the stretch out to two-turns, but has struggled to get out of the gate in good order through his first two starts. The addition of blinkers could help, but at a short price, I do not fully trust. #3 Mau Mau was off a step slow in his debut in Florida on April 3. The son of Empire Maker trailed through much of the 1 1/16-mile event before picking it up a bit on the far turn and eventually finishing a well-beaten fourth. The Bill Mott trainee retains the services of Joel Rosario and with a better start should take a big step forward. He is capable of springing the upset, as is #8 Oceanic who stretches out to a route of ground after a runner-up performance going 6-furlongs at Tampa Bay Downs for Jordan Blair.

Race 9: Oddsmaker Mike Battaglia listed #6 Bingwa as the 3-1-morning line favorite based on her being the quickest from the gate in this 5 ½-furlong dash over the turf, but she is likely to get pressed by #1 Queen of Shades. Both runners make sense to include, but I like the chances of #8 Cardamon. The Pioneerof the Nile filly has yet to race over the sod, but has the pedigree to like the green being out of a Touch Gold mare that has produced Emollient and Courtier. The 4-year-old filly should get a perfect outside stalking trip under Martin Garcia and has a big shot to hit the wire first. I also give a look to #5 I’llhandalthecash in the second start of her 4-year-old campaign and #12 Dixieincandyland who looks to make it two straight sprinting on the grass for Eddie Kenneally.

Race 10: #7 Fearless has run some fast races and brings the strongest resume into this high-level optional claimer at two-turns over the main track, but I prefer the late blooming #8 Top Seed. The son of Orb has yet to go a route of ground, but has the speed to make the lead under Corey Lanerie and comes off an extremely impressive victory versus lesser at Tampa Bay Downs on Apr. 22. The Phipps Stable colt is bred to love the added ground and looks like a Shug McGaughey runner that could have a big second half of 2020.

Race 11: Old Forester Mint Julep Stakes: The finale is full of talented fillies and mares, but #1 Juliet Foxtrot stands out in her first try of 2020. The Juddmonte Farms home bred won her first three starts in the States last year and then ran extremely well in defeat in her final three races, including a brutal beat to Vasilika in the John C. Mabee (GII) at Del Mar in late August. With little pace signed on in this year’s Old Forester Mint Julep, look for Florent Geroux to find a prominent spot along the inside and make it a perfect 2 for 2 at historic Churchill Downs.

ASMUSSEN THREE WINS AWAY FROM ROMANS’ ALL-TIME TRAINING RECORD AT CHURCHILL DOWNS – Hall of Fame trainer Steve Asmussen continued to close on Dale Romans’ all-time leading trainer record at Churchill Downs and began Friday’s nine-race card only three wins behind 737-to-734. Asmussen had nine entries Friday while Romans had one.

TV SCHEDULE THIS WEEK – The racing action from Churchill Downs Racetrack throughout the 2020 Spring Meet will be broadcast on FOX Sports’ “America’s Day at the Races,” which will air every race day on either FS1 or FS2. Produced by the New York Racing Association, Inc. (NYRA) in partnership with FOX Sports, “America’s Day at the Races” is the acclaimed national telecast presenting coverage and analysis of the best racing from around the country.


DOWN THE STRETCH – Friday’s nine race card at Churchill Downs had a first post of 1 p.m. There was a $44,804 Super Hi 5 carryover in Race 9 and $7,449 carryover in the 20-cent Single 6 Jackpot (Races 4-9). … The main track was listed as “good” for the first three hours of training on Friday following a late afternoon storm on Thursday. The track dried out by 9 a.m. and was listed as “fast”. … Free Brisnet past performances are available daily at www.churchilldowns.com/handicapping. 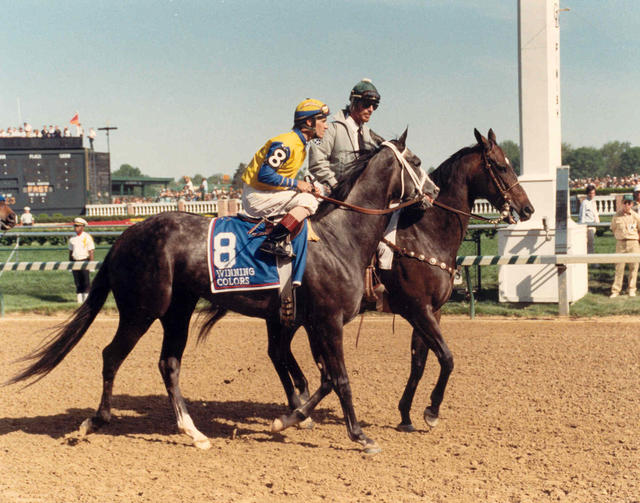